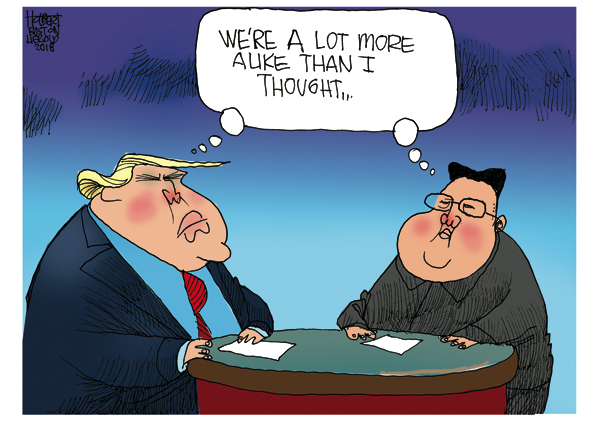 President Donald Trump has upended expectations and interrupted the drumbeat toward war on the Korean Peninsula with his agreement to meet Kim Jong Un at “a time and place to be determined.” But what happens if talks with “Little Rocket Man” blow up on the launching pad?

The odds are high. Few analysts expect Kim to give up North Korea’s nuclear deterrent, which he sees as vital to his regime’s survival. Kim’s existential stakes and Trump’s mercurial brinkmanship could make a highly combustible combination. And by reversing the staging sequence of summitry — a series of lower-level meetings to produce a basket of deliverables that muckety-mucks can then bless — Trump threatens to turn what should be the diplomatic equivalent of the Brandenburg Concertos into an acid jazz improvisation.

At least in the short term, the U.S. and Trump have much more to lose from failed talks than Kim does. North Korea’s dictator doesn’t have to explain to voters what went wrong. If anything, he can say that he stood firm against unreasonable demands, going toe-to-toe with a U.S. president in person as a diplomatic equal. That’s something his father and grandfather never achieved.

Trump, meanwhile, will be faced with two unpalatable alternatives: As his erstwhile ambassadorial nominee Victor Cha has noted, Trump may conclude that diplomacy “has run out of road” and opt for a military solution. Or he may have to face the challenge of getting the world to sign on to even stricter sanctions.

In both cases, he would not be able to move ahead effectively without the support of South Korea, Japan and other allies. China and Russia, each with huge stakes in the future of the Korean Peninsula and vetoes in the UN Security Council, also need to be on board. They both have reasons to favor dialogue over war or more bad-dog sanctions that will embroil Russian and Chinese companies.

Given Trump’s temperament, his denuded diplomatic establishment and his perception of his political base, how likely is he to pursue the kind of consultations and give-and-take necessary to keep nervous allies and a revanchist Russia and rising China on board? With all due respect to Jim Mattis, Rex Tillerson and Nikki Haley: Good luck with that. What’s more likely in the event of a summit failure is the U.S. facing the same dilemmas with which it started — only more isolated.

That prospect, which won’t be far from the minds of the few remaining adults in the Situation Room, is likely to generate more pressure for a face-saving deal than one that stands the test of time. But, hey, given the choice between a catastrophic war or a glitzy deal that’s as short-lived as Trump Steaks, Trump Mortgage, Trump Vodka, Trump Magazine, Trump University or other failed ventures, I know which one I’d choose.

David Shribman: In 1968, the world turned upside down