Salisbury: Is it dangerous or safe? Police Department urges residents to dig deep on crime statistics 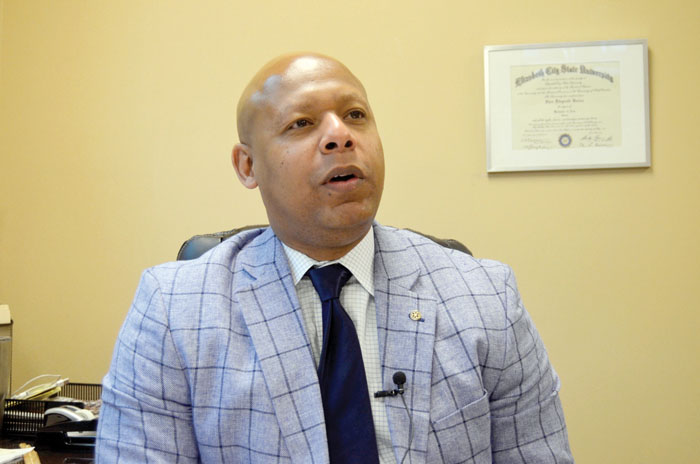 Salisbury Police Maj. Shon Barnes talks about recent reports from outside entities that report the amount of crime in Salisbury. Barnes said the department is doing a lot to work to reduce in Salisbury. Shavonne Walker/Salisbury Post

SALISBURY — According to an online real estate database, Salisbury is ranked No. 78 on the list of the most dangerous 100 cities in the nation.

But according to an online home security review site, the city is ranked among the 25 safest cities in the state.

Salisbury Deputy Police Chief Shon Barnes advises residents to dig a little deeper when it comes to websites that rank crime. Operators of the sites look at data differently, including taking statistics from the FBI, census data and using algorithms. Most FBI data comes from individual law enforcement agencies.

According to safehome.org, Salisbury is ranked No. 21 among the safest North Carolina cities. While based on a compilation of a number of stats from various sources including the FBI, neighborhoodscout.com ranks Salisbury at No. 78 on the list of most dangerous cities in the U.S.

“We’ve seen reductions over the last year, and we will continue to see reductions as long as we do our part and we involve our citizens in the decision-making process,” Barnes said.

“So if you think about it, about 190 people came home to homes that were not burglarized compared to the year before, and that’s a huge success,” Barnes said.

“Residential burglaries reduction is a matter of the community coming together, trusting us and being willing to call us if they see something suspicious and taking our advice and our tips,” Barnes said.

“I will put that number up against any city in America. So for any website that would say our city is dangerous, show me another city’s that reduced residential burglaries by almost half in one year,” Barnes said.

Barnes said the Police Department attributes the reduction in violent crimes to the work that investigators have done.

“We’ve done really good work with making sure that those people who are the worst of the worst were apprehended for their crimes. And when citizens see that, what it does is create an air of legitimacy. And when police departments are legitimate or deemed as legitimate by their citizens, people are more willing to help us and engage in the process,” he said.

“When they don’t see us as being legitimate, they try to take things into their own hands. There’s sometimes retaliatory violence. But we really haven’t seen that a lot in this city over the last year because of the work that our patrol officers have done and the work that our detectives have done,” Barnes said.

What stands out most in people’s minds is homicides. Barnes said the Police Department cleared 100 percent of its homicide cases in 2017.

In 2017, there were nine homicides. One incident involved two victims, for a total of 10.

“I’ll put that clearance rate against any city in America. If you can show me that you cleared 100 percent of your homicides, then I’ll say great,” he said.

He said police are seeing the relationship between law enforcement and residents getting better over the past couple of years.

“I think it started about a year or two ago with Chief Stokes and him being willing to hear the community’s concerns, the good and bad and being willing to take that back and come up with a strategy to solve community crime,” Barnes said.

He said part of it involves the neighborhood-oriented policing philosophy that every officer has a neighborhood and every neighborhood has an officer.

The department began with basic foot patrols and building relationships with people in the community.

And officers are becoming more specialized.

“We are trying to make sure we have detectives who are specialized on one particular thing. We’ve reorganized our Criminal Investigations Division to include a crimes against person section. So we are getting rid of general detectives,” Barnes said.

He said the department partnered with the Bureau of Alcohol, Tobacco and Firearms and the FBI to analyze shell casings to determine if they are from the same weapon or not. The Police Department is also looking at computer forensics, improving data capabilities and re-establishing its relationship with the Rowan County District Attorney’s Office.

He said the partnership with the Rowan County Sheriff’s Office has allowed police to do foot patrols and community policing.

Barnes urged people who are not sure of the accuracy of data being reported on any website to go to the Police Department and discuss stats or any issues they may have.