No. 1 Virginia ‘salts’ away ACC semifinal win over Clemson 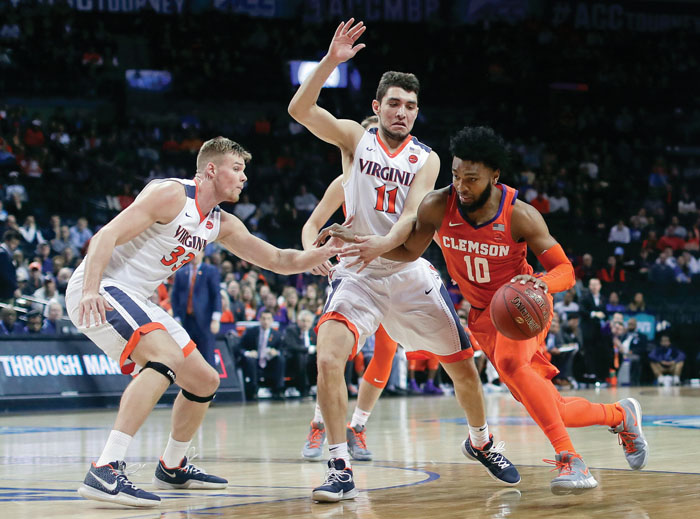 NEW YORK (AP) — On the court and in the crowd, orange was everywhere as Virginia and Clemson clashed in the Atlantic Coast Conference semifinals.

In typical fashion, the nation’s top team turned in a blue-collar effort and salted the game away, so to speak.

Kyle Guy scored 15 points and No. 1 Virginia advanced to the ACC championship with a 64-58 victory over No. 19 Clemson on Friday night.

The top-seeded Cavaliers (30-2) got several crucial contributions from role player Jack Salt down the stretch and will play for the tournament title Saturday night in Brooklyn against 12th-ranked and sixth-seeded North Carolina, a 74-69 winner over second-seeded Duke.

“This is a complete group. Their unity is as good as any as I’ve ever coached,” Cavaliers coach Tony Bennett said. “They’re relentless the way they play, and that’s the way we have to play to be good.”

Shelton Mitchell had 18 points and Elijah Thomas added 15 for the fourth-seeded Tigers (23-9), who remain the lone original member of the ACC that hasn’t won the conference tournament. Clemson was trying to reach the finals for only the third time.

Tigers leading scorer Marcquise Reed, averaging better than 16 points, was held to six on 2-for-14 shooting. He missed nine of 10 tries from 3-point range against the most suffocating defense in the country.

“They’re just so big, long, athletic, and there’s a lot of them, so they keep rotating guys,” Clemson coach Brad Brownell said. “They don’t ever back off. They play like this every day.”

Virginia used a quick 10-0 run to build a 14-point lead with 13 minutes remaining and then slowed the game down, but Clemson cut the deficit to five with 7:22 left. That’s when Salt, a 6-foot-10 junior center from New Zealand who was averaging 3.4 points and 4.1 rebounds, started coming up really big.

After tossing in a baby hook with 8:25 to go, Salt grabbed an offensive rebound, scored on a turnaround bank shot in the post and followed with another bucket inside at the five-minute mark.

Salt wasn’t done. He pulled down an important defensive rebound, had a tip-in with 2:02 left to make it 59-51 and then saved a long pass from going out of bounds.

Salt scored all eight of his points and snatched six of his game-high eight rebounds after halftime. Virginia fans chanted his name and gave him a standing ovation when he went to the bench.

Clemson got within four with 13.4 seconds left, but Devon Hall hit two free throws and Reed missed two shots at the other end as Virginia closed it out.

Hall and reserve forward Mamadi Diakite scored 10 points apiece for the balanced Cavaliers, who enjoyed a 21-5 advantage in bench points and overcame 28 percent shooting (5 for 18) from 3-point territory. Ty Jerome had a career-high 10 assists.

In the semifinal appetizer before Duke and North Carolina renewed their storied rivalry, Clemson executed nicely on offense for the first 10 1/2 minutes and jumped out to a 20-13 lead as Virginia missed eight of its first nine 3-point tries.

But as if they simply flipped a switch — and turned the lights out on Clemson — the Cavaliers clamped down and held the Tigers to 0-for-10 shooting the rest of the first half. UVA fans roared their appreciation of the defensive effort, and at the other end Guy scored eight points as Virginia hit seven of eight shots in a 16-0 spurt.

Clemson: Picked in the preseason to finish 13th in the ACC, the Tigers set a program record with 11 regular-season wins in ACC play and then won their tournament opener 90-82 over Boston College to reach the semifinals for the first time since 2011.

Virginia: After beginning the season unranked, the unanimous No. 1 team in the country reached 30 wins for the fourth time in school history and did nothing to suggest it shouldn’t be the top overall seed in the NCAA Tournament. … Wearing a brace on his left knee for the second consecutive game, Guy looked perfectly healthy again.

The team’s leading scorer sprained his knee last Saturday in the regular-season finale against Notre Dame, but had 19 points and a game-high seven rebounds Thursday in the 75-58 quarterfinal win over Louisville.

HOME AWAY FROM HOME

Virginia is 7-1 at Barclays Center, including 4-0 this season

IN THE COMPANY OF A LEGEND

Bennett was chosen the USBWA Henry Iba National Coach of the Year for the third time. The only coach with more was UCLA great John Wooden (six).

Clemson: Headed to the NCAA Tournament for the first time since 2011, the team’s first season under Brownell. “I do feel confident with our team. I think we’re playing pretty good basketball. I thought we got better this weekend,” Brownell said.

Virginia: The school’s ninth appearance in the ACC championship game. The previous one was a 61-57 loss to North Carolina in 2016. Virginia beat the Tar Heels 61-49 at home in early January.