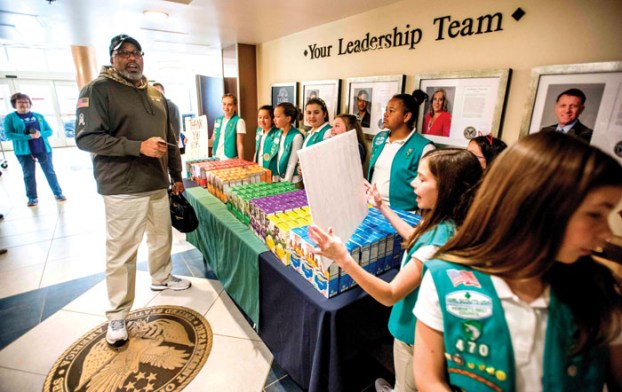 James Morton, an Army veteran and VA employee, talks with the Girl Scouts at their cookie table. Troop 470, from St John's Lutheran Church set up a table in the foyer of the Hefner VA Medical Center Friday and handed out boxes of cookies to veterans and hospital employees. Jon C. Lakey/Salisbury Post

‘If you can’t eat them; treat them’: Girl Scouts honor veterans with free boxes of cookies

SALISBURY — Joseph Gonsalves, marking his 75th birthday Friday, said it was his best moment all day.

Heading home after he had received treatment at the Hefner VA Medical Center, Gonsalves and his walker rolled into the lobby of Building 2 and found an army of Girl Scouts eagerly waiting to greet him.

And though they didn’t know it was Gonsalves’ birthday, the girls had a present for him and all other veterans, employees and volunteers — a free box of Girl Scout cookies.

An appreciative Gonsalves chose a box of Thin Mints to take with him, and when the Scouts heard it was his birthday, they serenaded him with the birthday song. A pretty good feeling for Gonsalves.

“I love it,” the Army veteran said of what the Scouts were doing. “A great thing.”

Over a three-hour period, Girl Scout Troop 470 planned to give away 420 boxes, which were received as contributions for veterans as they went through their normal cookie sale season.

The troop called its side campaign for veterans, “If you can’t eat them, treat them.”

“At booth sales, people often buy one box of cookies for themselves and one for veterans,” troop co-leader Donna Prunkl said. “Or they give the girls a 20-dollar bill and say to donate five boxes to the VA.”

Sponsored by St. John’s Lutheran Church, Troop 470 scouts debuted this same effort last year, when they collected 180 boxes for veterans. They set a goal of 200 this year. The end result was more than double that.

“They served our country, and we’re giving back to them,” Ashley Yang said.

Troop co-leader Ashlee Dangerfield said after last year’s success, the girls were especially motivated to speak up and encourage donations for the veterans. Several people in the community also collected monetary donations for cookies after hearing about the girls’ project, the leaders said.

“We wanted all the people who donated to see that the cookies were delivered,” troop co-leader Kari Hippert said. “Through this project, the girls learn about generosity and respect for the contributions of our veterans.”

As they encouraged veterans, employees and volunteers walking by to pick up a box, the Scouts held up homemade signs that said, “Free Cookies for Vets” and “Thank You for Your Service.”

The Scouts reported that Thin Mints and Samoas were hands-down favorites of the veterans.

“I’d say a cookie a day keeps the doctor away,” said nine-year Army veteran James Morton, now a supervisor of nutrition and food service for the VA.

Morton chose Thin Mints, and several of the girls said at once, “Thank you for your service.”

“Thank you for thanking me,” Morton said.

Lilly Dangerfield sold 1,000 boxes of Girl Scout cookies this year and brought 255 of those boxes for veterans Friday. She said her secret was setting up a stand in her mother Ashlee’s embroidery shop, and also having an inside salesman at Freightliner.

Richard Pickett, a combat medic in Vietnam from 1966 to 1968, chose a box of Do-Si-Dos and said he thought what the Girl Scout troop was doing was great.

The girls also were doing him a favor. His wife, Ruth, earlier had bought six boxes of Thin Mints — not Richard’s favorite.

“I don’t have to worry about him taking them,” Ruth said.

Hercules and Dolores Shannon are retired from the Army and now VA volunteers. Hercules was talked into taking a box of Savannah Smiles. “She said they’re good,” Hercules said of the Scout who encouraged him to take a box.

Dolores, who was in the Army Reserve and retired from the VA as a nurse, received a free box of Thin Mints.

“I’m looking for a donation box,” a grateful Dolores said. “You know what I’m saying?”

Were the troop leaders proud of the girls?

“They ask for opportunities to serve,” Hippert said. “… They just can’t get enough.”

SALISBURY — A good-sized crowd turned out Friday night for the debut of the Knight Drive-in Theater at the Rowan... read more