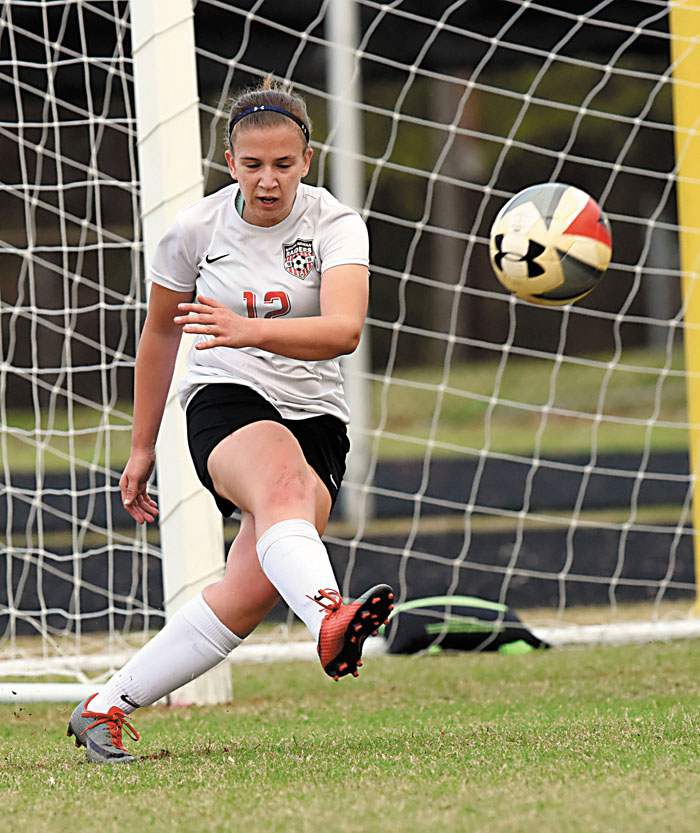 LANDIS — It is two weeks into the girls soccer season and so far there are no blemishes on South Rowan’s smooth complexion.

“We’ve got the pieces this year,” winning coach Kyle Neal said. “We’re hoping to keep them put together and in place and see what we can do with this. We feel really good about it so far.”

They should. South is 4-0 in Central Carolina Conference matches and wrestling with Salisbury and West Davidson for the league lead. Against East (2-2), the Raiders used their speed and handicraft to score three first-half goals. Elusive sophomore Madison Henry continued her assault on the record book with three more goals, giving her 16 this season and 46 in 28 varsity games.

“All we have to do,” said teammate Katelyn Goodman, “is put the ball anywhere near her and she’s gonna get it. She’s that good.”

“I think our defense is phenomenal,” she said, after East allowed 19 shots-on-goal. “We build from the back. But (Henry), her footwork is amazing. Our girls haven’t seen anybody quite like that.”

South looked sluggish and played a lot of kick-and-chase in the early stages, but sprang to life in the 16th minute. That’s when Henry opened the scoring by converting off a doorstep scramble. Eight minutes later, she settled a pass from junior Rhiannon Kimmer and rifled a shot from the right side that buzzed past East keeper Lauren Weisensel.

“The defense being able to play the ball through was a big part of it,” said Henry. “And Rhi, she’s the same as me. If someone gives us an opening, we’re going to take it.”

Weisensel, a junior who made 11 saves, credited the creativity of South’s midfield, which was admirably anchored by senior center-half Raquel Landaverde.

“They were all really good at hitting the gaps,” Weisensel said. “We had four defenders and they were able to split them. I thought two of (Henry’s) goals were on us. I should have been able to get to them. The other one she hit really hard and put it out of my reach.”

Kimmer gave South a 3-0 lead with 9:25 remaining in the first half. Henry sent a pass across the goalmouth to Kimmer, who scored her fifth goal of the season on a close-range tap-in. “We’re just pretty good at finding the holes in a defense,” Landaverde said.

East’s best scoring chance came midway through the second half when forward Alexis Avalos lined up an indirect kick from inside the box on the left side. Her heavy-footed smash had eyes for the upper left corner, but sailed over the crossbar. The Mustangs finished with eight shots.

“We pushed them back,” said Goodman. “Our midfield did a good job of not even letting them have opportunities.”

South potted the only goal of the second half when Henry accepted a feed from Karigan Ford and blasted home a 10-foot shot from the left side. Henry remains tomorrow’s news — even though she arrived a year ago.

“What do I think of her?” Neal responded to a post-game question. “I think we’re lucky to have her. She’s a star. She’s not a secret anymore — and yet is able to have this much success.”

Of course, South’s game plan was to use the non-league match to correct mistakes made in its initial CCC triumphs.

“Tonight, we wanted to work on fixing our shape and slowing the game down,” Neal said. “We want to be hard to play against and be good when we go forward. We have an opportunity to shine in this conference. It’s all leading up to Salisbury, which just may be a showdown.”

NOTES: The match got a little chippy in the second half, when East’s Jessie Jones and Carlee Lowry were shown yellow cards. … South keeper Michelle Rivera made four saves to post the shutout. She’s allowed only two goals in five games. … Kimmer’s assist was her team-leading seventh. … Neal expects senior defender Holiday Harvey to make her season debut Monday when South hosts West Davidson at 6 p.m. East plays a non-leaguer at Concord next Wednesday.

Clemson beats BC to set up rematch with No.…