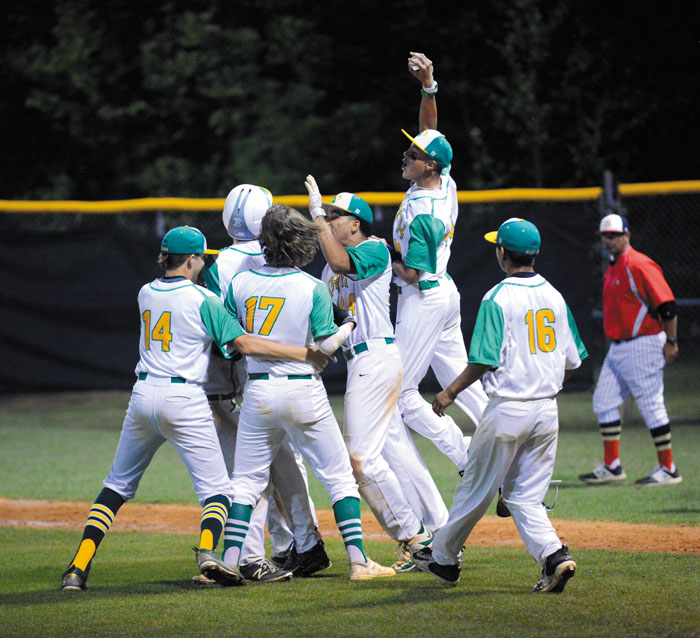 Wayne Hinshaw file photo/for the Salisbury Post ... North Rowan’s baseball team celebrates a victory over Salisbury last season. The Cavs have moved to the 1A YVC this year.

He’s young. At 26, he’ll be the new kid on the block in a county where the other five head baseball coaches are iconic guys.

The staff DeSantis has assembled also has no gray hairs. Patrick Hampton, outfield coach and first base coach, was swinging a bat for West Rowan seven years ago. Bradley Robbins, the pitching coach, was firing missiles off the mound for East Rowan six years ago and won a Rowan County Pitcher of the Year award.

“My background is as a hitter, a leadoff man,” DeSantis said. “So, I knew I needed to find a good pitching coach. Hampton knew Bradley, and then Bradley came on board. We’re young guys trying to build something good. We want to be here a while.”

DeSantis works as a P.E. teacher at Hanford Dole Elementary School. When former North Rowan assistant principal Lauren Raper was serving as the principal at Hanford Dole she was impressed by DeSantis and encouraged him to put in an application for the North baseball job. He did.

It’s been a hectic time for DeSantis since practice started, working at one school, coaching at another. Between the two schools, there are a lot of names to try to remember.

Eventually, he’d like to get a P.E. job at North. He’d like to help out as an assistant football coach, but mostly he’d like to be able to stay connected to his players during the school day. That’s important to him.

DeSantis, who is married, has wanted to coach since he was a youngster, and he’s built a solid baseball background. He was highly regarded while playing in one of the country’s hotbeds for high school baseball. He hit .431 as a senior with five homers.

Then, he played for a powerhouse junior college program at Southeastern Community College in Iowa, followed by years on strong teams at Georgetown, an NAIA school in Kentucky.

“I played on a lot of winning teams,” DeSantis said.

North was a winning team not long ago —  17-8 and league champions in 2016— in Aaron Rimer’s last year as coach. Rimer took the Topsail High job following that season.

This first season for DeSantis figures to be challenging. North has moved down from 2A to 1A, but the YVC is traditionally a stout 1A league. In its last four-year tour of the YVC from 2010-13, North tied for the conference championship in 2011, but the Cavaliers finished sixth or seventh the other three years.

North has graduated star lefty Joe Harrison as well as leading hitter Henderson Lentz from the 2017  team that went 11-14 and qualified for the state playoffs for coach Tommy Small.

No household names return for the Cavaliers.

The pitching staff will be led by senior McGwire Smith, who enjoyed some good days with the Rowan County Junior Legion team. He struck out 14 batters and pitched a four-hitter as North opened the season with a YVC win against Albemarle.

“He can locate, and he’ll be a horse for us,” DeSantis said.

Jordan Goodine, a sophomore lefty, will be the No. 2 pitcher. A stocky football linebacker who was 2-0 on the mound last year, he was impressive in his first outing of 2018, tossing an 80-pitch complete game to finish the sweep of Albemarle.

Sophomores Johnathan Spry and Charlie Durham and freshman Chase Shoaf figure to be the other pitchers who will log major innings. Also listed as hurlers are sophomore Bryan Lawson and freshman Mack Koontz.

Senior Brett Tucker will be one of the team leaders. The senior catcher/leadoff hitter may be North’s most experienced player.

Lawson and Will Anthony, the big football offensive lineman, are the third basemen.

“Will has hit some mammoth shots in practice, and we’re hoping that’s going to carry over into the games,” DeSantis said. “Lawson is fundamentally sound on defense.”

Senior Kobe Dupree will stabilize the infield at shortstop. He’s a solid defender.

At second base, there are a lot of options with Lawson, Smith, Spry and junior Logan Stoner.

Goodine will be the primary first baseman and will bat third in the lineup. Sophomore Malachai Turner  can handle first when Goodine pitches.

Junior Sydney Patton anchors the outfield in center field. Shoaf will be the starting left fielder and is penciled in as the No. 2 hitter in the lineup. Durham, Stoner and sophomore Caelan Stinson are the leading candidates for right field.

“We don’t have a ton of power, but we do have some pretty good speed,” DeSantis said. “I see us winning games by executing hit-and-runs, steals and bunts. The goal is going to be to push across a run every inning.”

While North certainly would be sixth if you ranked the six teams in the county, DeSantis is upbeat and confident, even after a 5-2, error-plagued loss to Salisbury in North’s third game.

“I think we can open some eyes,” he said. “We’ll surprise people.”