North Carolina beats Miami and gets Duke next at ACC Tournament 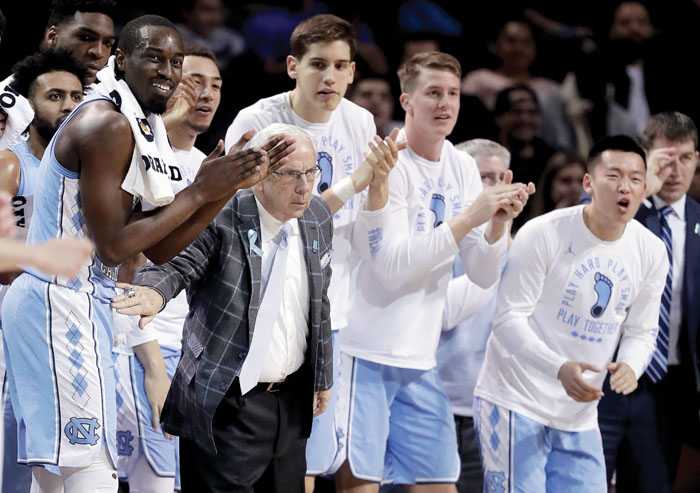 North Carolina head coach Roy Williams and players react after a basket against Miami during the first half of an NCAA college basketball game in the Atlantic Coast Conference men's tournament Thursday, March 8, 2018, in New York. (AP Photo/Julie Jacobson)

By RALPH D. RUSSO, AP College Sports Writer
NEW YORK (AP) — Theo Pinson dived on a loose ball, pulling it away from a Miami player, and quickly pushed it ahead to Cameron Johnson to start a North Carolina fast break that ended with Kenny Williams’ layup.
That put the Tar Heels up 10 on the Hurricanes with 2 minutes left, all but wrapping up a second straight Atlantic Coast Conference Tournament semifinals meeting between North Carolina and Duke in Brooklyn.
Pinson scored a career-high 25 points and had 11 rebounds, helping the Tar Heels recover from a horrific start and awful shooting by their leading scorers to beat No. 24 Miami 82-65 on Thursday night.
For a second straight year, Tobacco Road’s biggest rivals will be played on Flatbush Avenue.
The sixth-seeded Tar Heels (24-9) face the fifth-ranked and second-seeded Blue Devils for the third time this season on Friday night for a spot in the championship game — just as they did last year in the tournament’s debut at Barclays Center.
“It’s a big-time game,” Pinson said. “I mean, everybody and their mama going to be watching the game tomorrow, everybody knows that. And, going to be ready. My teammates going to be ready.”
It will be the 22nd time Duke and North Carolina play in the ACC Tournament. Duke leads 13-8, including six wins in a row since North Carolina’s victory in the 1998 championship game. Last year, Duke went on to win the ACC championship.
“You know, last year we lost this game that’s going to be played tomorrow,” North Carolina coach Roy Williams said. “I think we kept playing.”
The Tar Heels did indeed, winning the NCAA Tournament.
Duke rode freshman star Marvin Bagley III, who had 33 points and 17 rebounds, to a victory against Notre Dame in Friday night’s first game. Meanwhile, Pinson has had consecutive double-doubles here and six in his last 14 games.
“I don’t see anything common right now,” the 6-foot-6 senior Pinson said, with a smile, about the 6-10, future NBA lottery pick. “We just both have a double-double.”
Ja’Quan Newton, who beat North Carolina nine days ago in Chapel Hill with a 40-foot buzzer beater, scored 17 points for third-seeded Miami (22-9).
Pinson scored 10 points in 3 1/2 minutes of the second half, including a corner 3 to make it 69-63 with 4:25 left. Forty-two seconds later, Pinson dribbled through the Miami press and threw down a slam that had the UNC fans chanting “Taarrr! Heels!”
“I thought Theo was sensational … really controlled the whole tempo of the game on the offensive end,” Williams said.
Carolina needed all it could get from Pinson.
Luke Maye, UNC’s leading scorer, went 1 for 15 from the field and point guard Joel Berry II shot 4 for 14, playing through a twisted ankle that sent him to the locker room early in the second half.
BIG PICTURE
North Carolina: The Tar Heels have been gritty and Pinson has been brilliant in pulling away from Syracuse and Miami here. But they’ll need to knock down more shots to deal with Duke. Other than Pinson, the Tar Heels were 20 for 59 from the field (34 percent) against Miami.
Miami: Freshmen Chris Lykes and Lonnie Walker IV have stepped up for Miami since Bruce Brown was injured 12 games ago. Against UNC, they shot a combined 7 for 25.
BAD START, FORTUNATE FINISH
North Carolina went almost 7 minutes without scoring to start the game, missing its first 13 shots and falling behind 14-0. Williams was so exasperated he made a wholesale lineup change, all five starters out at once. The Duke fans who remained at Barclays had a blast watching the Tar Heels struggle.
Backup point guard Seventh Woods snapped the drought for UNC with a three-point play at 12:51.
“It was a weird game,” Williams said. “But those five guys got in, and the best play was Seventh taking the ball to the basket because the first group in there acted like we were going to be shot and killed and done all kinds of things.”
The Tar Heels then finished with a flourish and grabbed the halftime lead when Johnson was fouled by Walker while getting off a 60-foot heave to beat the first-half buzzer. Johnson made three free throws to put the Heels up 32-31.
UP NEXT
North Carolina: The Tar Heels split with Duke this season, each winning at home. The Blue Devils won on Saturday 74-65.
Miami: The Hurricanes’ next stop is the NCAA Tournament.
“Our expectation is to win,” Walker said. “We’re not going to this tournament to lose.”
___
For more AP college basketball: https://collegebasketball.ap.org and https://twitter.com/AP_top25