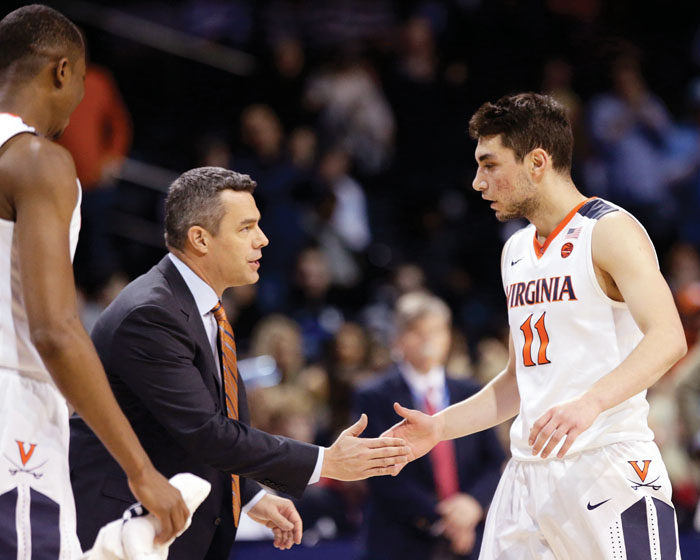 Virginia head coach Tony Bennett talks to Ty Jerome (11) during the first half of an NCAA college basketball game against Louisville in the quarterfinal round of the Atlantic Coast Conference tournament Thursday, March 8, 2018, in New York. (AP Photo/Frank Franklin II)

NEW YORK (AP) — With leading scorer Kyle Guy back following a brief injury scare, the nation’s No. 1 team is off to a strong postseason start.

Guy and his Virginia teammates looked like healthy favorites on Thursday, beating Louisville 75-58 in the quarterfinals of the Atlantic Coast Conference Tournament.

Guy scored 19 points in his speedy return after a sprained left knee and the top-seeded Cavaliers (29-2) weathered a second-half charge. They’ll play in the first semifinal Friday night against 19th-ranked and fourth-seeded Clemson, a 90-82 winner over No. 12 seed Boston College.

Hall had 14 points and five assists as Virginia methodically dismantled a Louisville team seeking a major upset in Brooklyn to augment its NCAA Tournament credentials. Instead, the ninth-seeded Cardinals (20-13) will sweat out Selection Sunday hoping for an at-large bid.

“Really proud of our effort, and we’re looking forward to next week,” said a confident David Padgett, the interim coach who took over when Rick Pitino was fired before the season. “We’ve played a very, very difficult schedule, under very difficult circumstances this year, and my guys have 120 percent earned an opportunity to have their name called.

“You can’t possibly sit here and tell me that we’re not one of the best 68 teams in the country.”

Guy got injured last Saturday in the regular-season finale against Notre Dame and went scoreless in 18 minutes. But the sophomore guard, a first-team All-ACC selection, started against the Cardinals as expected and wore a large, black brace on his knee.

“All week in practice I was just trying to get used to it. There’s definitely a mental part of it where you sort of feel safe with it on,” Guy said. “It didn’t really bother me much.”

Coming off curls and firing from long range, Guy shot 7 of 14 from the field — including 4 for 6 on 3-pointers — in 36 minutes. He also grabbed a game-high seven rebounds, and his three-point play with 2:35 left made it 69-54 a few minutes after Louisville had sliced the margin to four.

Virginia opened a 17-point lead late in the first half and was still up 13 before the Cardinals went on an 11-2 spurt to trim their deficit to 56-52 with 8:55 remaining. But reserve forward Mamadi Diakite scored six straight Cavaliers points inside, putting in his own airball after it slipped out of Louisville’s grasp, and Virginia regained control.

A week earlier, the Cardinals nearly took down Virginia at home before losing 67-66 in gut-wrenching fashion. They led by 13 with 11 minutes to play and by four with 0.9 seconds on the clock, but redshirt freshman De’Andre Hunter banked in a 3-point heave at the buzzer to win it for the Cavaliers.

“When we played there at Louisville, they kind of hit us in the mouth and we kind of had to respond. The idea was to come out and try to punch first,” Hall said. “Every time we’ve played them it’s been a battle.”

A second-round victory Wednesday over Florida State gave the Cardinals another shot at Virginia, but this time they came up far short.

Hunter, the ACC Sixth Man of the Year, had 12 points and Ty Jerome, from nearby New Rochelle, added 11. Diakite scored 10, helping UVA to a 42-16 advantage in the paint.

“I thought he gave us a real nice lift,” said ACC Coach of the Year Tony Bennett.

Ray Spalding led Louisville with 16 points, and Deng Adel had 13. The Cardinals stayed in it for a while by making nine 3s but shot just 36.7 percent overall against the nation’s stingiest scoring defense. They managed one garbage-time field goal in the final 8:50.

Louisville: As this scandal-plagued season nears an end, the Cardinals dropped to 1-3 in ACC Tournament games. If they don’t get invited to the NCAAs, they’ll certainly wonder what might have been if they had held off Virginia last week.

Virginia: Of course, the Cavaliers would love to add to their accomplishments this season by winning the school’s third ACC Tournament title. But after running away with the regular-season crown by four games, they probably have little else on the line in Brooklyn. The unanimous No. 1 team in the nation after beginning the season unranked, Virginia figures to have a top seed in the NCAA Tournament — perhaps even the No. 1 overall seed — already locked up. The Cavaliers are looking for their first national championship. They’ve been to the Final Four twice, in 1981 and 1984 under coach Terry Holland.

Virginia has won seven in a row against Louisville. … Adel scored in double figures for the 24th straight game. … Virginia shot 52.5 percent from the field. The only opponent to shoot at least 50 percent against the Cavaliers this season was Louisville (25 for 50) in its 74-64 loss at UVA in late January.

Louisville: Squarely on the bubble, the Cardinals will hold their breath Sunday.

Virginia: The school’s fourth ACC semifinal appearance in five years. Virginia throttled Clemson 61-36 at home on Jan. 23 in their only regular-season meeting.