Clemson beats BC to set up rematch with No. 1 Virginia 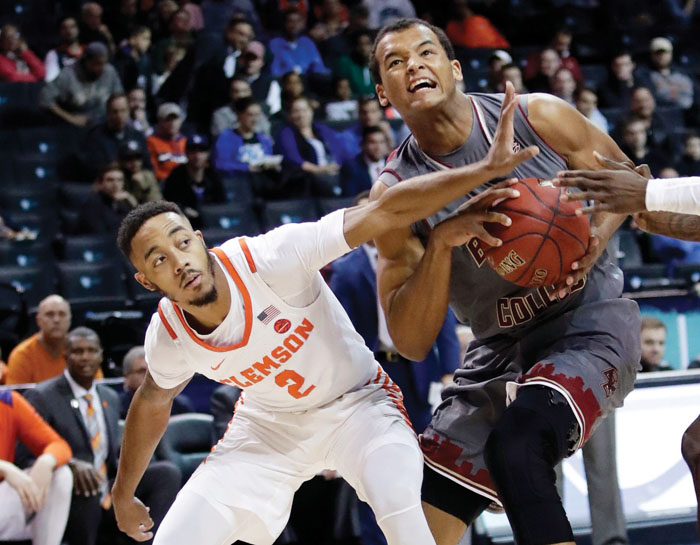 Boston College's Steffon Mitchell (41) looks toward the basket as Clemson's Marcquise Reed (2) defends during the first half of an NCAA college basketball game in the quarterfinal round of the Atlantic Coast Conference tournament Thursday, March 8, 2018, in New York. (AP Photo/Frank Franklin II)

By RALPH D. RUSSO, AP College Sports Writer
NEW YORK (AP) — Clemson scored 90 points, a school record for the Atlantic Coast Conference Tournament, against Boston College on Thursday to advance to the semifinals for the first time since 2011.
Next up for the Tigers will be a very different kind of game against a very different kind of opponent: No. 1 Virginia. Clemson scored 36 points when it lost to the stifling Cavaliers in the regular season.
“What’s that average to?” Clemson coach Brad Brownell asked about the output against BC and Virginia. “We’ll take the average (Friday).”
On Thursday, Gabe DeVoe scored 25 points and Shelton Mitchell had 21 as No. 19 Clemson beat Boston College 90-82 to set up a rematch with the Cavaliers and the chance to reach the ACC final for the first time since 2008.
The fourth-seeded Tigers (23-8) played some solid defense of their own in an up-and-down game against BC. The Eagles’ excellent backcourt of Jerome Robinson (20 points) and Ky Bowman (23 points) combined to shoot 10 for 32 from the field, a day after the pair scored 50 points to carry 12th-seeded BC (19-15) to an upset of North Carolina State.
“Just tried to make them make tough plays,” DeVoe said. “We know they can shoot the ball well. Just making them make tough plays and trying to run them in transition. They played three games in three days. We knew they would have a little tired legs, so just trying to get out in transition.”
Clemson, picked to finish 13th in the ACC in the preseason, is having its best season since its first under Brownell in 2011. That year the Tigers beat BC in the ACC quarters, lost in OT to North Carolina in the semifinals and went to the NCAA Tournament. They haven’t been back in those positions since.
In their first game at Barclays Center in Brooklyn this week, the Tigers were energetic defensively and on target with their shots. Clemson made 9 of 17 from 3-point range in the first half and Bowman and Robinson combined for seven points.
“Great on-ball pressure, and they iced a lot of the ball screens, and are just trying to take us out of our offense I think is what they did,” said Robinson, a junior with a potential NBA career ahead of him.
BIG PICTURE
Boston College: Maybe the fatigue of three games in three days caught up to the Eagles against a rested, quality opponent. Since the tournament became a five-day event in 2014, no team that played on Day 1 had ever made it to Day 3. BC also didn’t get much from center Nic Popovic against Clemson. After scoring a combined 35 points in victories against Georgia Tech and North Carolina State, Popovic scored nine points against Clemson while dealing with foul trouble.
Clemson: The Tigers lost 61-36 at Virginia on Jan. 23 and scored 13 points in the second half. That game was two days after losing forward Donte Grantham, the team’s second-leading scorer, to a season-ending knee injury.
“We were rolling when we had Donte Grantham,” Brownell said. “We felt like we were one of the better teams in the country. And had kind of proven some of that early on, and we’ve had to adjust, specifically (Mitchell and DeVoe) and Marcquise, they’ve had to adjust. There’s been a lot more responsibility in terms of scoring and different things falling on their shoulders. And we had to tweak some things in our offense just to try to take advantage of other situations where we were using Donte in our offense, and we’ve gotten better at that.”
UP NEXT
Boston College: The Eagles are going to the NIT and that’s a big deal after six straight losing seasons.
“There are all steps,” fourth-year coach Jim Christian said. “You don’t know where a winning culture, you don’t really know where it’s going to start and where it’s going to grow from, but in the last two weeks, and we lost some of those games, the culture has completely changed. The mentality completely changed. The attitude with which we played completely changed. And it was really fun to be around.”
Clemson: The Tigers have lost seven straight to Virginia.
___
For more AP college basketball: https://collegebasketball.ap.org and https://twitter.com/AP_top25