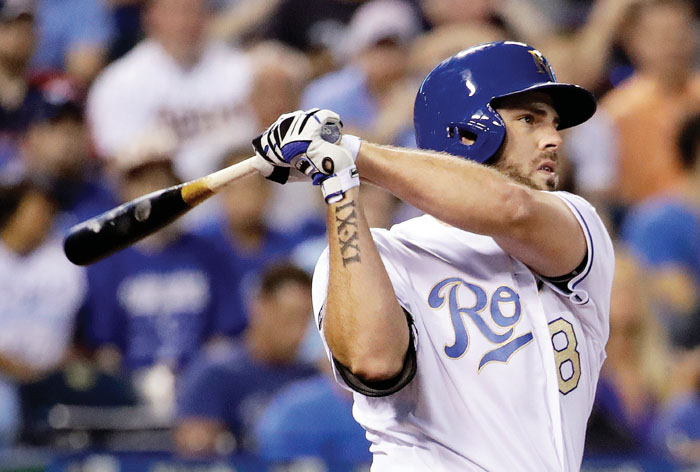 FILE - In this June 30, 2017, file photo, Kansas City Royals' Mike Moustakas hits a solo home run during the sixth inning of a baseball game against the Minnesota Twins in Kansas City, Mo. A person familiar with the negotiations tells The Associated Press that Moustakas and Kansas City have agreed to a one-year contract that keeps him with the Royals and guarantees the third baseman $6.5 million. The deal could be worth up to $22.7 million over two seasons, the person said Thursday, March 8, 2018, speaking on condition of anonymity because the agreement was subject to a successful physical. (AP Photo/Charlie Riedel, File)

Mike Moustakas is staying with the Kansas City Royals in a surprising turn dictated by a historically slow free-agent market.

Kansas City agreed Thursday to a one-year contract that guarantees the third baseman $6.5 million, a person familiar with the negotiations told The Associated Press.

The deal could be worth up to $22.7 million over two seasons, the person said, speaking on condition of anonymity because the agreement was subject to a successful physical.

Moustakas gets a $5.5 million salary this year and has the chance to earn $2.2 million in performance bonuses based on plate appearances. The agreement, reached exactly three weeks before opening day, includes a $15 million mutual option for 2019 with a $1 million buyout.

The 29-year-old infielder turned down a $17.4 million, one-year qualifying offer from the Royals in November. But he found the interest of many other teams dimmed because a deal would have required compensation such as a loss of draft picks and/or international signing bonus allotment.

His agreement was first reported by Yahoo.

Among the players who in 2015 led the Royals to their first World Series title in 30 years, Moustakas will find a changed clubhouse at Kauffman Stadium. First baseman Eric Hosmer left as a free agent for a $144 million, seven-year contract with San Diego, and center fielder Lorenzo Cain departed for an $80 million, five-year deal with Milwaukee.

But a languid market that left dozens of free agents unsigned when spring training began last month allowed the Royals to reach an agreement with Moustakas and keep shortstop Alcides Escobar for a $2.5 million, one-year contract.

Cheslor Cuthbert had been expected to get the majority of playing time at third base, and Ramon Torres has also played the position. But in Moustakas, the Royals were able to keep a left-handed power bat in the lineup, not to mention a veteran who helped to establish the current clubhouse culture.

Moustakas was an All-Star for the second time last season, when he hit .272 and set a Royals season record with 38 homers. He also drove in 85 runs in what was by far the most productive season of his career.

Ultimately, his track record — he’s a career .251 hitter and had never hit more than 22 homers before — and some injuries that have sidelined him over the years may have kept clubs reticent from making big-money long-term offers.