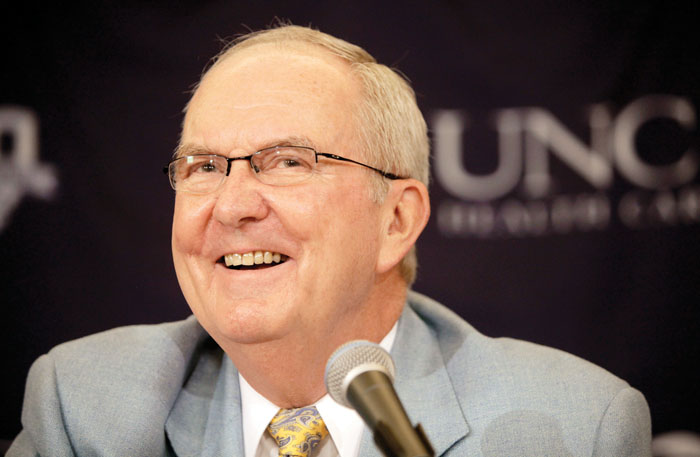 FILE - In this April 20, 2011, file photo, University of North Carolina radio play-by-play announcer Woody Durham smiles during a news conference at the Dean Smith Center in Chapel Hill, N.C. Durham, the retired "Voice of the Tar Heels" who called North Carolina football and basketball games for four decades, died Wednesday, March 7, 2018. from complications of the neurocognitive disorder that had prevented him from public speaking. He was 76. (Shawn Rocco/The News & Observer via AP, File)

Son Wes Durham said his father died from complications of the neurocognitive disorder that prevented him from public speaking.

“He’s my favorite announcer,” said Wes Durham, who followed his father’s career path and was in New York calling this week’s Atlantic Coast Conference men’s basketball Tournament. “His influence on me and my career is immense. He’s had the biggest impact on me professionally, obviously, and was undying in the support.”

“From the time I was 14, when I told him this is what I want to do, to a month ago when we’re having a conversation about the way this business is moving. He couldn’t communicate it very well then, but I could tell I was triggering something. In those terms, I’ll never be able to get that back.”

Woody Durham called UNC games from 1971 through 2011. He worked more than 1,800 games with a voice that became inextricably tied to some of the school’s most unforgettable victories. That included the 1982 and 1993 NCAA basketball championships under late coach Dean Smith as well as the 2005 and 2009 titles under Roy Williams.

On Wednesday night at the ACC Tournament in New York, No. 12 North Carolina warmed up for its game against Syracuse with white shirts that read “Woody” across the back.

Atlantic Coast Conference Commissioner John Swofford, the former athletic director at UNC, compared Durham’s voice to “gospel to generations of Tar Heels who trusted his every word.” Williams called it “a very sad day for everyone who loves the University of North Carolina”

“It’s ironic that Woody would pass away at the start of the postseason in college basketball because this was such a joyous time for him,” Williams said. “He created so many lasting memories for Carolina fans during this time of year. It’s equally ironic that he dealt with a disorder for the final years of his life that robbed him of his ability to communicate as effectively as he did in perfecting his craft.”

Wes Durham decided to stay in New York and work the rest of the ACC Tournament, which started Tuesday at the Barclays Center in Brooklyn.

“One, it’s what he wanted me to do, to the point he told my mom that,” Wes Durham said. “I’m doing it to honor him. Second part is, his love for this event was really, really strong. And I fell in love with the event because of his love for it and so this seemed right. And I knew when I left Monday morning that there was a possibility it could happen.”

He said he would work through Friday’s semifinals and leave Saturday. He was not scheduled to call the championship game Saturday night.

Woody Durham called 23 bowl games and 13 Final Fours in his career. He also spoke during the public memorial following Smith’s death in February 2015.

Durham said in an open letter to fans in 2016 that he had been diagnosed with primary progressive aphasia, which affects language expression.