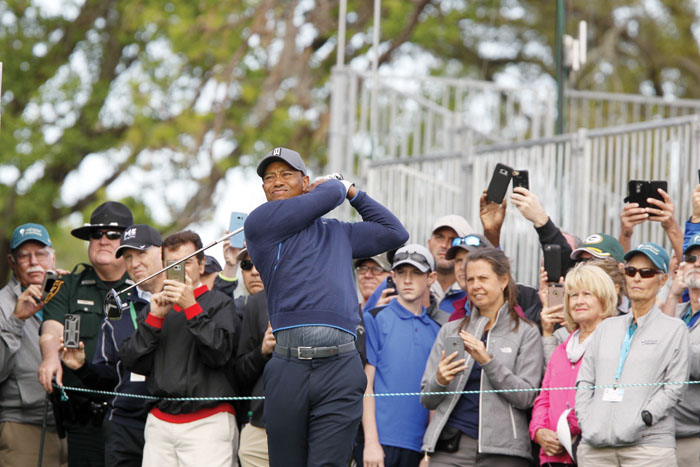 Tiger Woods tees off on the 10th hole at Innisbrook's Copperhead course during the pro-am at the Valspar Championship golf tournament, Wednesday, March 7, 2018, in Palm Harbor, Fla (Jim Damaske/Tampa Bay Times via AP)

PALM HARBOR, Fla. (AP) — Jordan Spieth is among the young stars in golf with only a glimpse — if even that — of how Tiger Woods could take over a tournament with his game and appeal.

That moment for Spieth came in a practice round at Muirfield Village, with Woods as his teammate.

Spieth was a 20-year-old in the 2013 Presidents Cup, playing with Steve Stricker against Woods and Matt Kuchar in a modified alternate shot. They were taken by cart to start on the par-5 seventh hole.

“I stood on that tee,” Spieth said Wednesday. “We were trying to get off quickly in front of the groups, and I remember being unbelievably nervous on that shot, and for most of the shots I hit in the round — even though it’s a practice round, and he was my teammate. They went eagle-birdie-birdie or something like that to start. I thought, ‘Man, this must be what it’s been like for the last 20 years for guys.”

Spieth made a hole-in-one that day on the 12th hole. He has played with Woods seven times since, including the third round of the British Open at Hoylake, and Woods has never had the lower score in those occasions.

They play again Thursday in the opening round of the Valspar Championship.

The setting is Woods returning to golf, and while it is nothing new at this point, it is no less the attraction. He has never played the Valspar Championship, and the last time he was at Innisbrook before this week was in 1996 for a mixed-team event during the silly season that no longer exists.

Woods was nine tournaments (and two victories) into his pro career at that point.

In some respects, he is starting over. This is his fourth PGA Tour event since returning from a fourth back surgery, and it was only six months ago that Woods wasn’t even certain he would be able to play again at a high level.

He is making progress. He finished seven shots behind at Torrey Pines (a tie for 23rd) and eight shots behind at the Honda Classic (12th). In between, he missed the cut at Riviera, which is one reason he is at Innisbrook for the first time.

“I only got two rounds in LA. I missed the cut there,” Woods said. “I felt really strong afterward. After playing Honda and really feeling good about it, I wanted to push myself in my practice sessions, which I did; push myself in the gym a little bit. And I can handle two weeks in a row.”

He also will play next week at Bay Hill, meaning four tournaments in five weeks as he prepares for the Masters.

There is a tendency to judge Woods’ progress by each shot, each round, each week. He is a little more patient, and that much was true when he checked on his statistics for the year. Woods said he couldn’t find any because he hasn’t played enough to be listed.

“I’ve only played 10 rounds,” he said. “I know people are saying that I’ve been erratic, little inconsistent. But 10 rounds, it’s not that many. … That’s basically how my comeback has been so far this year. I haven’t played a lot.”

The sleepy tournament in the Florida swing suddenly has some serious star power. The field includes Rory McIlroy for the first time, along with Henrik Stenson and Justin Rose, Adam Scott and Masters champion Sergio Garcia. Stenson will join Woods and Spieth for the opening two rounds.

Spieth isn’t one to get intimidated. One exception was playing with former President George W. Bush, but that tee shot and subsequent round of golf was easy.

“Anybody else outside of golf, you’re still doing what you know you’re better at than them,” he said. “When you’re on the tee with someone like Tiger who you have grown up watching him dominate the sport … it’s something that you just kind of get used to, I guess. Am I totally used to it? No.”

The last time they played was at the Phoenix Open in 2015, when Woods was a mess with his short game. Spieth shot 68 in the second round to get into weekend condition. Woods shot 82 and missed the cut.

But this is a different Tiger.

“I haven’t seen a whole lot of him the last few years since he’s been hurt and trying to come back,” Spieth said. “But we all hope for that Sunday afternoon pairing alongside all us young guys. We want that chance to be able to battle it out with him on Sunday. I know he wants that, too, to show us what he’s done to other people.

“Even if it’s not 2000 Tiger, it’s still Tiger on a Sunday,” he said. “And that’s something that would be an experience we haven’t had before.”