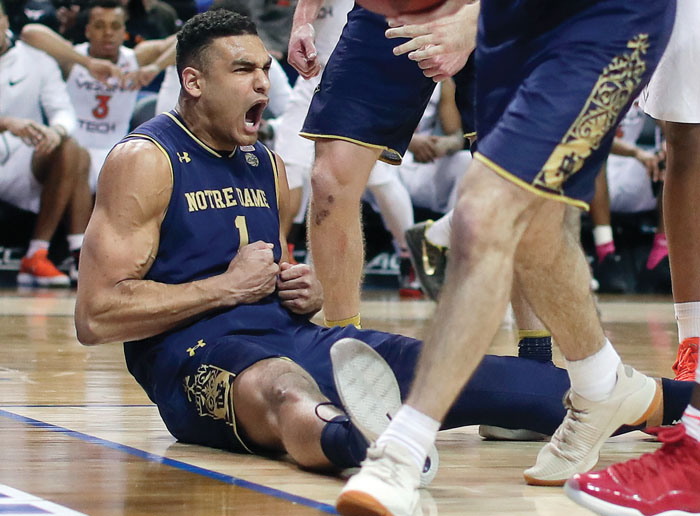 The biggest comeback in Fighting Irish history came just in time Wednesday night — and that was worth hollering about.

Colson banked in a go-ahead, 3-point heave that barely beat the shot clock with two minutes remaining, and Notre Dame rallied from 21 down in the second half to stun Virginia Tech 71-65 at the Atlantic Coast Conference Tournament.

“How about that, huh?” Fighting Irish coach Mike Brey said. “I’ve never been prouder of a group, because they were thumping us pretty good.”

Farrell scored 22 points for the 10th-seeded Irish (20-13), who overcame a dreadful start in extending their late push to reach the NCAA Tournament.

Finally healthy after injuries to Colson and Farrell nearly wrecked a promising season, Notre Dame advanced to play Thursday night in the ACC quarterfinals against fifth-ranked and second-seeded Duke, the defending tournament champion.

Do the Irish need to win at least that one, too, in order to make the field of 68?

Hard to say — but they sure woke up the echoes on this snowy night in Brooklyn.

“I’ve never been a big guy to campaign, but I think we really deserve to be in,” Brey said. “When I have my guys back, we’re a top-20 team, and I think people on that committee know that. I feel strongly that we should be part of it. We have another great opportunity to end all the drama of it (Thursday) night, but we need to get some rest.”

With the Irish stars struggling to make shots, seventh-seeded Virginia Tech (21-11) was cruising along with a 47-26 lead with 14 minutes remaining when Farrell drained his second consecutive 3.

That started a ferocious surge that got a feisty Notre Dame squad back into it. The game got a little testy as the Irish picked up the intensity and the Hokies went cold on offense.

A technical foul on Virginia Tech swingman Chris Clarke for shoving Farrell led to four Notre Dame free throws that trimmed it to 54-50 with 7:45 to go.

“He flopped and fell on the ground,” Clarke insisted.

Regardless, the Irish took advantage.

Colson connected on a long, desperation shot from the right wing that finally gave them a 60-59 edge. After the ball banked in, he kissed three fingers on each hand and gestured to the crowd with arms raised.

“That felt good. Backboard is there for a reason,” said Colson, who shot 1 of 10 in the first half and looked winded much of the night. “Those are the shots that you’ve got to hit during those times.”

Notre Dame extended its advantage at the free throw line the rest of the way. And when it was over, Farrell and Colson embraced in a big bear hug, senior to senior.

“That meant a lot to us. Just everything we’ve gone through. It was just a great win for us, and it was kind of emotional,” Farrell said. “He’s been a brother to me for my four years here.”

Colson, a preseason All-American in his fourth game back from a broken foot, finished with 12 points on 4-of-14 shooting. Rex Pflueger had 14 points and nine rebounds, and T.J. Gibbs added 13 points and seven assists for Notre Dame.

“All the stuff they’ve been through, they’re such tough dudes,” Brey said. “And tonight you saw it.”

Justin Robinson and Justin Bibbs scored 15 apiece for the Hokies.

Notre Dame: Previously, the largest comeback in school history was in February 2012, when the Irish erased a 20-point deficit to beat Villanova 74-70 in overtime. … Colson and Co. reached the second round by holding on for a 67-64 win Tuesday night over a Pittsburgh team that went 0-19 against ACC opponents this season. It hasn’t been easy but the Irish are still in it at Barclays Center, where they are 9-2 all-time.

Virginia Tech: With victories over top-10 opponents Virginia, Duke and North Carolina as part of a winning record in ACC play, it would seem the Hokies have their NCAA Tournament spot secured. Still, this was a very disappointing way to make a postseason exit. Virginia Tech had been 3-0 in ACC Tournament openers under Williams.

Notre Dame: The team’s third game in three nights, this one against a fresh Blue Devils squad that hasn’t played since upending rival North Carolina on Saturday night. Colson and Farrell were both out injured when the Irish lost 88-66 at Duke in late January during Notre Dame’s seven-game slide. … Duke (25-6) is 6-0 at Barclays Center, by the way.

Virginia Tech: Expecting an at-large bid to the NCAA Tournament on Sunday.