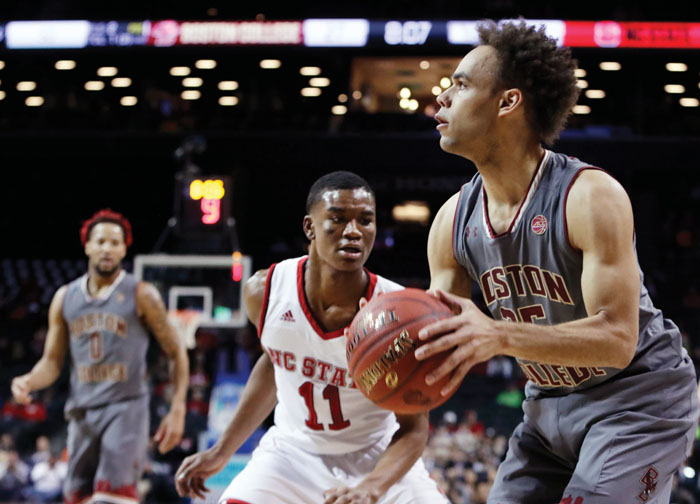 Jerome Robinson made a pull-up jumper with 17 seconds left to break a tie, and then forced a turnover on an inbounds play moments later, and Boston College upset North Carolina State 91-87 on Wednesday in the second round of the ACC Tournament.

Robinson scored 26 points and fellow North Carolinian Ky Bowman had 24 for the 12th-seeded Eagles (19-14), who will face No. 4 seed Clemson on Thursday in the quarterfinals at Barclays Center.

Just two seasons after going winless in ACC play, coach Jim Christian has the Eagles headed for at least an NIT bid — and who knows what else here in Brooklyn. They have already won more games in the ACC Tournament than any BC team since 2006, when the Eagles lost the championship game to Duke in their first season In the conference.

“In my first two years we had two ACC wins, and we knew that was just a process,” said Robinson, a junior. “And, I mean, I stuck with it, with Coach. We just listened to Coach, and he had the vision.”

The fifth-seeded Wolfpack (21-11) wiped out a double-digit deficit in the final 10 minutes and tied it five times down the stretch.

“Every time we made a basket, they would come down and make a basket,” North Carolina State coach Kevin Keatts said. “If you were a fan, the last three minutes of the game were pretty exciting.”

Then Boston College let Robinson, runner-up for ACC player of the year, take over.

Robinson dribbled away from the screen, left N.C. State big-man Omer Yurtseven behind and let go with a smooth jumper from about 10 feet to give BC a lead.

“I was trying to get around the big fella, and then by the time I got a little space, and I had seen (another defender) was trying to cut me off and probably take a charge there, so just pulled up for a mid-range,” Robinson said.

On the ensuing possession, Robinson was on the in-bounder as N.C. State tried to get it in from the front court, and got a hand on Allerik Freeman’s pass. Bowman came up with the ball and was fouled. He made two shots to put BC up four.

Bowman called the steal the “biggest play of the night.”

Markell Johnson cut it to two with 7.3 left, but then he called a timeout when the Wolfpack didn’t have one and was called for a technical. Robinson made two more free throws to seal the victory.

“I knew in my head we didn’t have any,” Johnson said. “I was so caught up in the game.”

Yurtseven had 18 of his 20 points in the second half and Freeman had 21 for North Carolina State.

Boston College:  The Eagles also became the first team since the ACC expanded to five days in 2014 to win an opening day game and follow it up with a victory on day two.

N.C. State: The Wolfpack led only once, 2-0. They never did figure a way to stop Bowman and Robinson, but maybe the biggest problem was on the boards. N.C. State was outrebounded 39-31 and gave up 13 offensive boards and 15 second-chance points.

Boston College center Nic Popovic hit the floor during a small pileup while going for a loose ball with about 12:30 left in the first half. At first he got up and started making his way back on defense, but after about three steps he stopped and went to the floor just short of midcourt, grabbing his lower right leg. He hopped to the bench and eventually was helped to the locker room. Popovic returned and re-entered the game with about seven minutes left. The sophomore finished with 15 points, seven rebounds and a sore calf.

N.C. State: The Wolfpack is in fine shape for an at-large NCAA bid despite the early exit here.