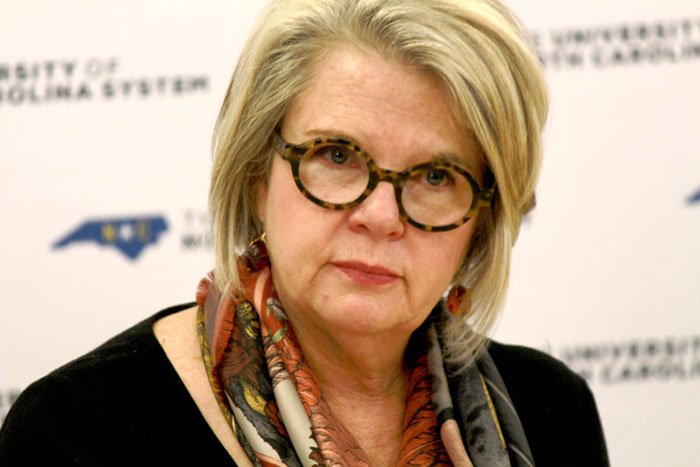 CHAPEL HILL — Two years after taking her seat as president of the University of North Carolina, Margaret Spellings is “pleased but not satisfied” with her work so far.

It’s been a busy and chaotic climb. During her first year in office, Spellings, along with the UNC Board of Governors, developed a university policy to increase affordability and accessibility for students. It was a big step, but more work remains, the former U.S. secretary of education told reporters at a news conference March 1.

Spellings was elected in October 2015 amid board squabbles and controversy. John Fennebresque, then the board’s chairman, resigned abruptly after clashing with his colleagues during the search for a new university leader. Accusations of muddied dealings and a lack of transparency plagued the board for months after.

The problems soured Spellings’ welcome. She faced intense protests from faculty and students before she even settled into her Chapel Hill office. Some protests were respectful, while others were disruptive and even violent. It was a tumultuous period, but suspicion and distrust seem to be long gone, Spellings told reporters last week.

“These folks are my friends. I don’t see anybody around here protesting,” she joked.

System leaders and staff members are finally hitting their stride, she said. Relationships with the legislature are strong, and the university budget is the best it has been in 10 years.

A major accomplishment is N.C. Promise, a program dropping in-state tuition to $500 a semester at three UNC schools. The system is also restructuring how it collects data for the sake of transparency and accountability, Spellings said.

Accomplishments aside, Spellings’ second year hasn’t been devoid of conflicts. A months-long board battle over the UNC Center for Civil Rights drew criticism of university governance and politics. A nonclinical academic center shouldn’t be allowed to sue state entities, some board members said. The body ultimately voted to ban the center from entering into lawsuits, to the displeasure of some.

Some discord persists. In September, board members sent a letter to Chairman Lou Bissette and Spellings complaining of failed communication and lack of collaboration.

In an editorial released late last year, Bissette wrote, “We must operate as a united board, focused on providing oversight, ensuring accountability and setting system policy while allowing our president, chancellors, faculty and staff to do their job.”

The message didn’t sit well with members such as former state Sen. Bob Rucho, who is running for statewide office again this year.

But the board isn’t divided as the public may think, Spellings told Carolina Journal.

In particular, Spellings is “really keen to figure out how we’re going to leverage technology.”

UNC has potential to launch an online degree program — it’s just a matter of figuring out what courses are best made for a digital platform, she said.

Campus safety is another priority, especially in light of the number of mass shootings recorded this year.

“I expect it will be an issue in the legislative session.”

Campus safety and emergency operations leaders are taking a look at security precautions on all campuses, she said.

Overall, the university is in a good place, but Spellings said she won’t be resting on any laurels.

“This is a mighty, mighty system. It’s why I came. We’re all very proud of it. It’s a treasure. Period. But does it need to improve? Is it under pressure in a time of change? Do we need to deploy technology? Do we need to be more efficient, more effective? Can we always be smarter? Do we need more access for more people, more cost effectively and quicker than ever before?”