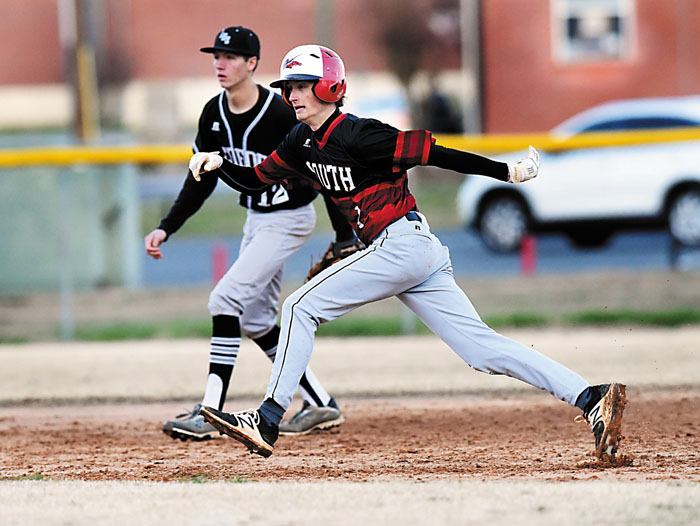 Wayne Hinshaw/for the Salisbury Post ... South Rowan’s Jaxon Miller, right, leads off second base after getting the only hit off of Ledford pitcher Chris Villaman, Thursday in Landis. Ledford won, 8-0.

The no-nonsense left-hander continued his mastery over the host Raiders on Thursday — hurling a one-hitter and striking out 13 in a briskly played, 8-0 Central Carolina Conference victory.

“He filled up the strike zone and located his pitches,” South coach Thad Chrismon said. “Yeah, he beat us before, but that was against a different team in a different year. They were a good challenge, as always.”

Villaman was an all-state selection as a sophomore last season, when he fired a perfect game against South (2-1/2-1) in the second round of the 3A state playoffs. Yesterday, he blended a 90-plus fastball with a sharp curve and a tantalizing change-up to silence the Raiders. He faced only 23 batters in a complete-game effort, retired 15 of South’s first 16 hitters and threw 16 first-pitch strikes.

“My coach told me they’d be looking for revenge,” Villaman said, after notching his second win. “That got me fired up. I was hoping for that, because I like competition.”

Ledford coach Chris Adams was among those impressed by Villaman, considered the Panthers’ No. 2 starter.

“He was pretty good,” Adams said after Ledford (3-0 overall) won its third conference game. “Obviously, he throws hard from the left side. But he had an effective change-up and was able to throw his off-speed pitches for strikes. The biggest thing for him is locating his fastball — and he did that today.”

Senior Jaxon Miller got South’s only hit when he grounded a bunny-hop single into center field, leading off the bottom of the sixth inning.

“It was a two-seamer,” said Miller, who delivered on an 0-1 pitch. “I watched it hit the bat and hustled to first base. But this was definitely a mental test, being down the entire game against a really good pitcher.”

Miller reached second and then third on wild pitches, but was stranded when teammate Bryson Bebber grounded out to end the inning. South’s only other baserunners were Andrew Jones — who walked on a 3-2 pitch in the last of the fourth — and Garrett Harrington, who coaxed a seventh-inning walk but was thrown out trying to advance from first to third on a game-ending passed ball.

“There were a lot of positives,” Chrismon said afterward. “That’s the thing. We pitched the ball well. We didn’t make mistakes in the field. We came out and competed.”

Miller was the losing pitcher. The right-hander pitched three innings and two of them went well. Ledford was retired in order in both the first and second before erupting for four runs in the top of the third — all with two men retired.

“For two innings I was hitting my spots, keeping it low and my curveball was really working,” said Miller, who yielded three hits and three walks in the third. “Then the transition from the windup to the stretch was tough. I couldn’t get my arm out in front, couldn’t locate anything well. It’s something I need to work on.”

Right-hander Zach Powers relieved in the top of the fourth inning and surrendered a two-out, RBI-single to Cameron Mills. An inning later Will Bethune lined a run-scoring single into right field that made it 6-0. Ledford’s last two runs crossed on a sixth-inning wild pitch and a seventh-inning balk.

“I thought their starting pitcher did a good job,” Adams said. “But the walks got to him and we got some timely hits.”

On this night, they combined that with Villaman’s every-pitch-has-a-purpose approach.

“Getting ahead in the count is what made me effective,” he said. “I got into a nice rhythm and just stayed there.”

NOTES: Both Villaman and Logan Whitaker, Ledford’s No. 1 pitcher, have verbally committed to N.C. State. Whitaker had the game’s only extra-base hit — a sixth-inning double that sailed over Jones’ head in center field. … Miller (1-1) threw first-pitch strikes to 10 of the 15 batters he faced and induced six groundouts in three innings. … The teams meet again this afternoon at Ledford. South’s much-anticipated game at Carson has been rescheduled for April 11.