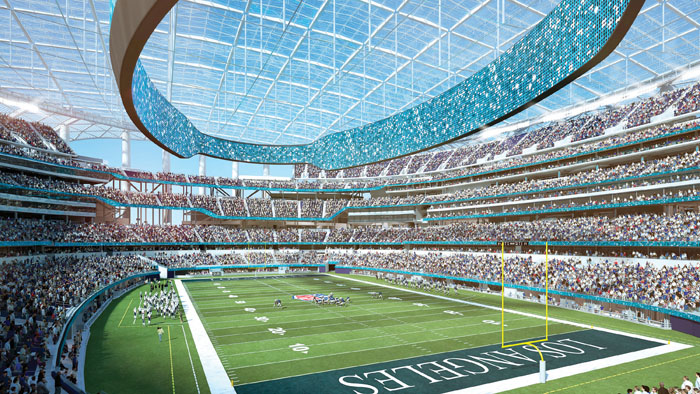 LOS ANGELES (AP) — The massive football stadium complex at Hollywood Park is currently a bustling construction site. The $2.6 billion project won’t welcome fans through its doors for another two years.

But the Rams and the Chargers are eager to show you to your seat.

Los Angeles’ two NFL teams will begin selling season ticket memberships for their new stadium for the first time next week. Both will start with only their premium seating, offering an array of privileges and amenities befitting the sizable price tags for the best 13,000-odd seats in what could be the most expensive arena in the world.

With relocation fading into memory after a pair of winning seasons in LA, both franchises are eager to move into the bright future promised by the palatial project rising in Inglewood. The 70,240-seat arena will also host the Super Bowl, the College Football Playoff title game and Olympic events in its first decade of existence after it opens in 2020.

“This has been a long time coming,” said A.G. Spanos, the Chargers’ president of business operations. “When I was at USC, we were talking about a new stadium in LA back then. This has been a slow pot to boil in Los Angeles, but the future is here. This venue is incredibly exciting.”

In an office building in coastal Playa Vista, the teams will begin showing off the project to their fans on Tuesday, starting with visits from many current season ticket holders for both clubs. The sleek LA Stadium Premiere Center features detailed scale models, video hype reels and a staff with carefully curated sales pitches for the privately financed project spearheaded by Rams owner Stan Kroenke.

“It’s exciting when you fly in and you see the steel coming out of the ground, or when you drive up and you see the stadium starting to take shape,” Rams chief operating officer Kevin Demoff said. “And now this is the first chance the fans really get to participate in being part of the stadium and seeing Stan’s vision come to life.”

The Rams and Chargers have also unveiled the first prices for tickets — and the prices for the stadium seat licenses that provide the opportunity to buy tickets.

Instead of selling the now-ubiquitous personal seat licenses, with which fans pay a sometimes-hefty fee for the opportunity to buy their tickets, the Chargers and Rams are selling a similar concept with a similar name, but one big difference: For the first time in NFL stadium history, that money will be returned to the fans — albeit in 50 years.

Instead of the naked cash grab of a PSL, the SSL is essentially an interest-free loan to finance the stadium construction. The structure also allows both the teams and the fans to avoid paying taxes on the licenses.

“We really feel like they are making an investment, and they’re a shareholder in the team and the stadium project,” Demoff said. “For us, rather than fan money going to taxes, it can go directly to the construction of the building. It builds a better building, and it requires no taxpayer money to do so. It’s a unique concept that we expect will be replicated from here on out.”

The Rams’ stadium seat licenses will begin at $100,000 for the stadium’s 500 “all-access” seats, located in two sections on either end of the 50-yard line. The Chargers’ SSLs will be $75,000 for the same seats, which include food and beverages, access to clubs, special parking and the guaranteed opportunity to buy tickets to the Super Bowl and every other event controlled by the stadium owners.

The Rams and Chargers are confident the structure will help as they persuade fans to pay for the licenses while knowing they’ll get all the money back in 2068 — or at least their heirs will.

Once the SSL is purchased, the Rams’ tickets for those premium seats are $375 per game, and the Chargers’ are $350.

Both teams obviously will sell the other three-quarters of the stadium at much lower prices, and the ticket prices won’t change during the stadium’s first three years.

“It’s very hard to compete at the highest level if you don’t have a first-class facility, and that’s something that our family has been working toward for a long time,” said John Spanos, the Chargers’ president of football operations. “We’re excited that it’s here soon.”