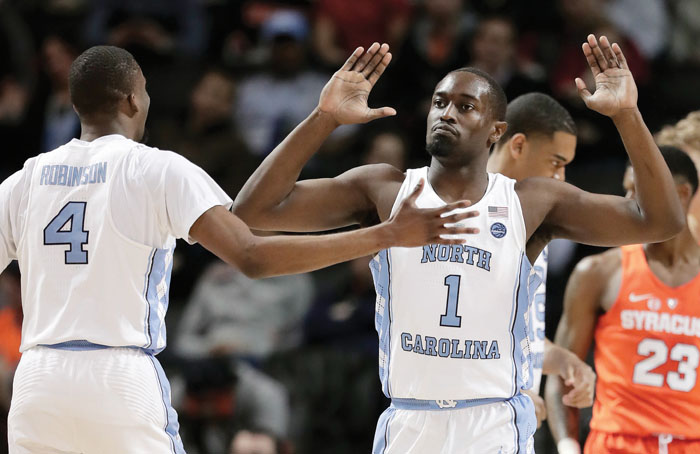 North Carolina forward Theo Pinson (1) high-fives guard Brandon Robinson (4) after scoring against Syracuse during the first half of an NCAA college basketball game in the second round of the Atlantic Coast Conference men's tournament Wednesday, March 7, 2018, in New York. (AP Photo/Julie Jacobson)

By RALPH D. RUSSO, AP College Sports Writer
NEW YORK (AP) — Theo Pinson pinpointed the reason North Carolina had success attacking Syracuse’s 2-3 zone.
“Getting me the ball,” the Tar Heels senior forward and resident comedian said.
Pinson was joking, but as with all good comedy there was some truth in the punchline.
Pinson had 16 points, 11 rebounds and six assists and Kenny Williams scored 17 points as No. 12 North Carolina beat Syracuse 78-59 on Thursday night to advance to the quarterfinals of the Atlantic Coast Conference Tournament.
The sixth-seeded Tar Heels (23-9) face third-seeded Miami on Thursday night in the quarterfinals at Barclays Center in Brooklyn.
After shooting 38 percent in the first half against Syracuse, the Tar Heels settled for fewer jumpers in the second and found some soft spots in the zone.
“Coach said yesterday in practice we’re such an unselfish team he doesn’t really have to worry about us moving the ball,” Pinson said. “You see tonight, I think it was multiple times, guys had shots and they were looking for their teammates.”
Oshae Brissett scored 20 points and made five 3s for 11th-seeded Syracuse (20-13), which never got closer than nine down in the second half. The Orange will head toward NCAA Tournament Selection Sunday firmly on the bubble for an at-large bid.
“Every coach in the country thinks his team’s a tournament,” Orange coach Jim Boeheim said. “It’ll be close. There’s a whole group of teams that — some that’s almost a coin flip.”
North Carolina won the last game of a quadruple-header at Barclays, but it was still a sad day for Tar Heels Nation. Woody Durham, former longtime “Voice of the Tar Heels,” died early Wednesday at 76 after a lengthy illness.
The Tar Heels honored Durham, who called North Carolina games for 40 years, by wearing white warm-up shirts that had “Woody” written in black letters across the backs. Coach Roy Williams wore a navy blue suit with a Carolina blue ribbon pinned to his lapel. Durham’s son, Wes, was courtside calling the game for Raycom Sports.
“It was a sad day for all of us because I lost a friend, but we lost a guy who’s a legend in North Carolina basketball,” Williams said.
North Carolina controlled the last 10 minutes of the first half and built a 39-29 lead at intermission. Then the Tar Heels surged to start the second half, with Williams dropping in a 3 to make it 51-33 with 15:35 left.
North Carolina shot 44 percent against the Syracuse zone, with Pinson picking through the seams and Williams doing damage in transition.
The lead was up to 21 when Williams slipped a pass to Cameron Johnson trailing on the break for a layup.
The game before North Carolina’s at Barclays Center had Notre Dame overcome a 21-point, second-half deficit against Virginia Tech. There was no such comeback for Syracuse.
BIG PICTURE
Syracuse: The Orange entered the day with an RPI of 36, and Boeheim has been touting good road victories against Louisville and Miami. Using advanced metrics, which the selection committee will consider, the Orange don’t stack up quite as well. They were No. 51 in KenPom ratings before playing North Carolina. And they finished 9-11 against ACC competition.
North Carolina: The Tar Heels improved to 7-1 against Syracuse since the Orange joined the ACC, and stopped a two-game losing streak. By losing the last two regular-season games, North Carolina slipped out of double-bye position in the ACC standings to the sixth seed. A team that doesn’t have much proven depth will likely ask a lot from its starters to win this tournament.
RIPPIN’ ROY
As North Carolina tried to work the clock with a big lead, the Tar Heels forced a quick shot that had Williams trying to rip his suit jacket on the sideline.
“I did not do it properly,” said Williams, who was able to laugh it off. “I started around the collar where it’s folded over so the material is twice as strong. If you really want to rip a jacket in half, start at the back, at the bottom where it’s already split.”
WINTER WONDERLAND
A blizzard hit New York on Wednesday, with 40 mph wind gusts and hours of white-out snow.
“The ACC goes from South Bend, Indiana, to Boston to Miami,” Williams said. “Why can’t we find someplace warm to play this sucker?”
UP NEXT
Syracuse: Wait and hope.
North Carolina: The Tar Heels lost to Miami on a 40-foot 3-pointer at the buzzer in Chapel Hill on Feb. 27.
___
For more AP college basketball coverage: