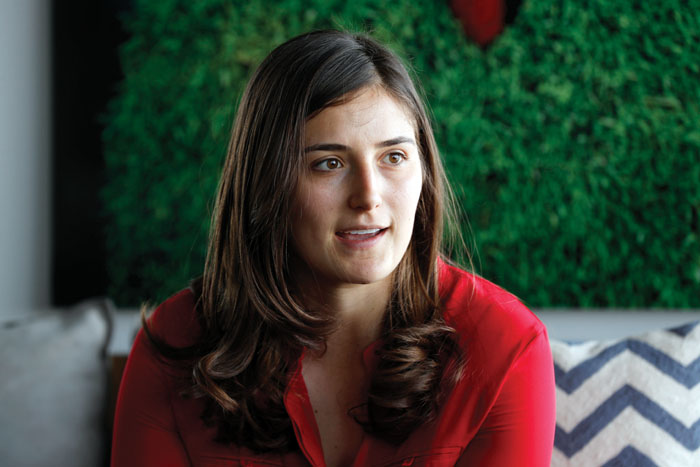 FILE - In this Thursday, Oct. 26, 2017 file photo, Sauber driver Tatiana Calderon talks during an interview in Mexico City. Formula One team Sauber has signed on Tuesday, March 6, 2018 Colombian driver Tatiana Calderon as its test driver for 2018. The 24-year-old Calderon was the team’s development driver last season. The team says “she will be completing simulator training sessions and coaching with engineers” during gran prix weekends and at the team’s headquarters in Switzerland. (AP Photo/Eduardo Verdugo, file)

MONTMELO, Spain (AP) — Tatiana Calderon was announced as Sauber’s test driver on Tuesday and quickly had to defend women’s presence in Formula One.

The 24-year-old Colombian spoke a day after Carmen Jorda, a former development driver in F1 and a member of FIA’s Women in Motorsport Commission, reportedly said women can’t compete equally with men because F1 is too physically demanding. According to ESPN, Jorda said women should try racing in a series like Formula E, which uses electric cars.

“I don’t think there is a physical barrier,” Calderon told Spanish media during preseason testing near Barcelona. “Obviously women and men are different and we have a little less muscle mass, but I can make up for that with training.”

Calderon is the first woman to become a test driver in F1 since Susie Wolff drove for Williams in 2015.

“Wolff has already shown that there is no physical barrier,” Calderon said. “I hope to show that we can compete.”

There was widespread reaction to Jorda’s comments, with former NASCAR and IndyCar driver Danica Patrick saying she didn’t agree with the notion that women are at a disadvantage in racing.

“I don’t buy into that,” Patrick told The Associated Press in a phone interview. “We are in a competition of repetition and staying calm and loosening up the death grip on the wheel, and staying focused and using your mind. These are the things that help you with endurance: Keeping a level head, keeping relaxed and having general fitness. If we were going for Olympic lifting, how strong can you possibly be? Then women would not win because that’s not how our bodies are built. But that’s not the game of racing.”

“Oh Carmen, you’re not helping proper female racing drivers with this comment,” he said in a tweet. “Ask @DanicaPatrick about being (strong) enough to drive a race car! She’d kick my butt in the gym & she’s probably as strong as any driver on the F1 Grid right now. Physical barrier is not your issue Carmen.”

In separate comments after a Formula E test in Mexico City last week, Jorda said her goal as a member of FIA’s commission is to get more women into racing.

“I’ve been racing since I was 11 and a lot has changed,” she told channel 3iMexico. “It’s not a sport only for men, it’s also for women. We obviously support all women in the sport.”

Jorda, who was appointed a development driver for F1 team Lotus in 2015, has been an advocate of an all-female racing championship, but Calderon disagreed.

“We don’t need that,” Calderon said. “I really think women can do really well.”

“I have been able to substantially expand and develop my skills as a race driver, and I am convinced that I will be doing so throughout this year,” she said. “I look forward to this season, and will give my all to demonstrate my capabilities.”

CHARLOTTE (AP) — Kevin Harvick has been stripped of the playoff points he earned for winning at Las Vegas because of violations discovered on his Ford.

The penalty is the loss of the seven playoff points Harvick earned for winning Sunday’s race and both stages. It was Harvick’s second consecutive win of the season.

Harvick also was docked 20 points. Harvick now has six playoff points instead of the 13 he had earned through three races.

Images of Harvick’s popped up on social media with fans wondering if the car was legal because the window appeared altered. Childers has maintained a brace failed.

JEFF GORDON AMONG NEW NOMINEES FOR NASCAR HALL OF FAME

CHARLOTTE (AP) — Jeff Gordon is among the new nominees up for induction into the NASCAR Hall of Fame next year.

The four-time NASCAR champion was added to the list of 20 nominees in the first year Gordon was eligible. He retired from full-time competition after the 2015 season with 93 career Cup victories. He is currently an analyst for Fox Sports.

The nominees were selected by a committee consisting of representatives from NASCAR, the NASCAR Hall of Fame, track owners from major facilities and historic short tracks, as well as Fox commentator Mike Joy.