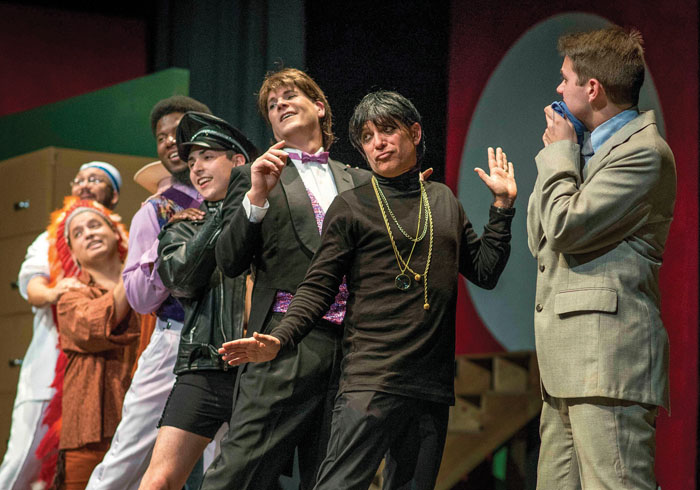 Bialystock and Bloom! Those names should strike terror and hysteria in anyone familiar with Mel Brooks’ classic cult comedy film. Now as a big stage musical, The Producers, opening at the Meroney Theater next Thursday, is a laugh-out-loud, outrageous, crowd-pleasing farce, with no shortage of show-stopping musical numbers and Brooks’ signature humor keeping audiences in stitches.

The plot is simple: a once successful, down-on-his-luck Broadway producer and his mild-mannered accountant come up with a scheme to produce the most notorious flop in history, thereby bilking their backers (a bunch of “little old ladies”) out of millions of dollars. Only one thing goes awry: the show is a smash hit!  The antics of Max Bialystock (Josh Wainright) and Leo Bloom (William McGinnis) as they maneuver their way fecklessly through finding the worst show ever written, hiring the worst director who ever lived, raising the money and finally going to prison for their misdeeds is a lesson in broad comic construction. At the core of the insanely funny adventure is a poignant emotional journey of two very different men who become friends.

With a truly hysterical book co-written by Mel Brooks (Blazing Saddles, Young Frankenstein) and Thomas Meehan (Annie) and music and lyrics by Brooks, The Producers is a musical adapted from Brooks’ 1967 film of the same name for which he received the Academy Award for Best Original Screenplay.

The original Broadway production opened at the St. James Theatre in April 2001, starring Nathan Lane and Matthew Broderick, quickly becoming not only the hottest ticket in town but also the hottest ticket in almost a decade while spawning the 2005 film version.  At the 2001 Tony Awards, The Producers won 12 out of its 15 nominations, setting the record for most wins in history and becoming one of the few musicals to win in every category for which it was nominated.  Its record for most nominations was broken in 2016 when Hamilton received 16 nominations; but its record number of wins still stands, with Hamilton winning 11.

Directed by Reid Leonard with Musical Director Adrian Smith, PPT’s version of The Producers showcases a hysterically talented cast made up of PPT veterans and a number of Meroney first timers.  With costumes designed by Ashley Ward and Eastern Costume Company, the show features eye popping dance numbers by Choreographer Ashlyn Keller Silver, including a tap number performed by “little old ladies” with walkers that is worth the price of admission!

It’s quite simple…if you like to laugh, you will love The Producers! 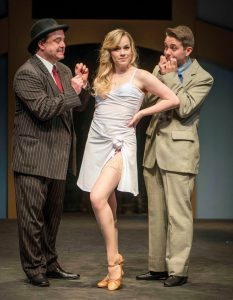