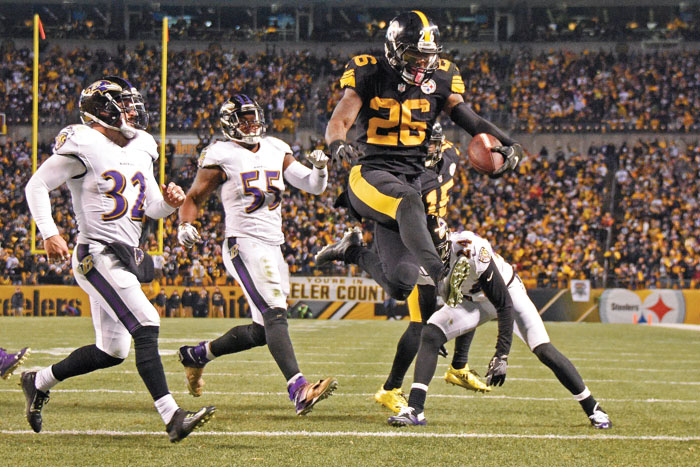 FILE - In this Dec. 25, 2016, file photo, Pittsburgh Steelers running back Le'Veon Bell (26) leaps into the end zone ahead of Baltimore Ravens strong safety Eric Weddle (32) for a touchdown during the second half of an NFL football game in Pittsburgh. The Steelers have put the franchise tag on All-Pro running back Le’Veon Bell for a second straight spring, putting his long-term status with the club up in the air. (AP Photo/Don Wright, File)

PITTSBURGH (AP) — Le’Veon Bell keeps saying he wants to stay with the Pittsburgh Steelers. The Steelers keep saying they want to keep one of the NFL’s best running backs in the fold for years to come.

They have until July 16 to make it happen.

The Steelers placed the exclusive rights franchise tag on the two-time All-Pro for a second straight spring on Tuesday, putting Bell’s long-term status with the club up in the air.

Bell, a two-time All Pro, accounted for 1,946 total yards and 11 touchdowns for the AFC North champions in 2017. Both Bell and Steelers management said after the season they hoped to get a contract extension done quickly, but failed to do so by Tuesday’s deadline for teams to use the franchise tag.

Bell is scheduled to make $14.54 million in 2018 if he signs the franchise tender and the two sides are unable to reach an agreement on a new deal. He skipped offseason workouts and training camp last summer before signing the tender on the eve of the regular season. The absence led to a sluggish start, though he was an indispensable part of Pittsburgh’s offense once again, breaking his own club record by catching 85 passes.

The 25-year-old made the 2017 All-Pro team at the “flex” position, one he considered a tribute to his versatility. Bell said repeatedly over the past year he believes he’s different than other backs in the league and wants to be paid accordingly. He is arguably the best receiving back in the NFL and he’s averaged nearly 25 touches a game in five seasons, though he’s only been healthy at the end of the year twice. Bell has twice been suspended by the NFL for violations of the substance abuse policy.

Bell turned down a long-term deal with the Steelers last summer and told ESPN in January he would consider retiring if the Steelers used the franchise tag on him again. He backtracked a bit during the Pro Bowl when he said he believed a new contract was in the works. It was a sentiment echoed by both Steelers president Art Rooney II and general manager Kevin Colbert early in the offseason.

Pittsburgh’s depth behind Bell is thin. James Conner carried the ball 32 times during his rookie season and the club signed Stevan Ridley at the end of the regular season as insurance. Bell tweeted Monday that regardless of the circumstances he wants to remain with the Steelers.

“Pittsburgh: the city that took in a 21-year old kid from small-town Ohio, the city I battled thru adversity in, the city that I became a man in,” Bell tweeted. “I love everything about being a Pittsburgh Steeler, and I want nothing more than to finish the rest of my career in Pitt!”