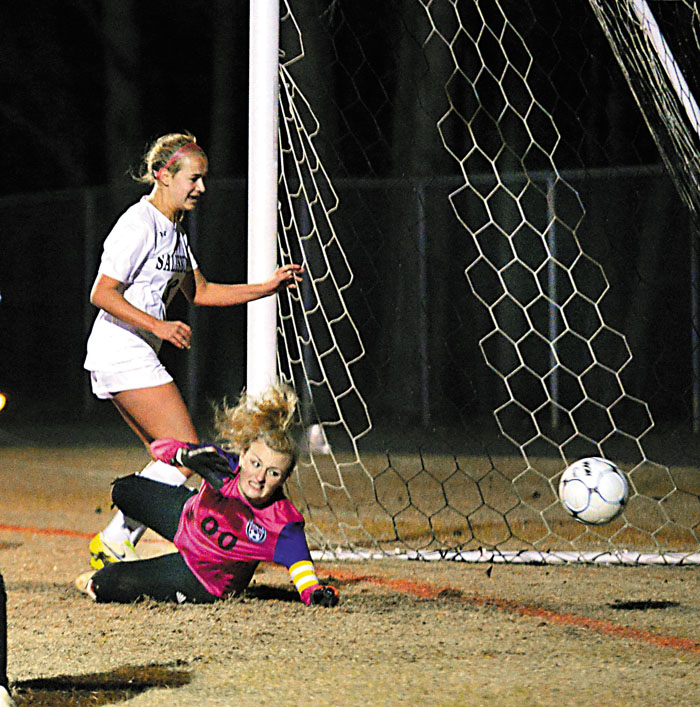 SALISBURY — Coach Matt Parrish figured there would be a chemistry test sooner or later for the Salisbury girls soccer team.

But Wednesday night’s shivering 6-0 Central Carolina Conference victory against visiting Central Davidson was the equivalent of taking — and acing — a mid-term during the second week of the semester.

“We really didn’t know where we stood,” said Parrish, moments after the Hornets (3-0 overall) won their third conference match and posted their third straight shutout. “I guess tonight was somewhat of a statement game. It was really, really encouraging to see the level of play we got from our younger players in their first real taste of high school competition. They’re figuring it out.”

“They were very good on set pieces,” Hench said after Central (3-1/3-1) suffered its first loss. “My girls did not defend well. We let Salisbury run in unmarked and convert plays. In those circumstances, you’ve got to win the ball.”

Muire scored three goals in a span of four minutes and 46 seconds early in the second half — each on a set feed from Rusher, who contributed a goal and four assists. It broke open a close match and put senior Julia Honeycutt and the rest of the Hornets at ease.

“We were a little nervous because we knew this result would foreshadow the rest of our season,” Honeycutt said. “Those three goals changed everything. They gave us confidence so we could just calm down and play our game.”

Honeycutt, the cerebral midfielder headed to UNC-Charlotte in the fall, opened the scoring in the 18th minute. Rusher initiated the play with an on-target corner kick from the right side that was deflected in front and pin-balled to Honeycutt, who ripped a 15-yard drive out of the air and past Central keeper Katlyn Grimes.

“I volleyed it and put it in the back of the net,” she said. “We needed to get that first goal. Right away, we were working together.”

Six minutes later it was 2-0. This time German exchange student Freya Obermueller took a pass from Caroline Cardelle and pumped a low shot past Grimes.

“Freya gives us something we would not otherwise have — speed up top,” Parrish said. “With her, we still have the ability to stretch the defense. And she is accustomed to being exceptionally unselfish. She likes to distribute, but when you have that kind of speed and a foot behind it, we need her to take aim.”

Muire handled that chore on three near-identical plays in the second half. Her first goal came on a header in front at the 3:41 mark. Two minutes later she deflected a loose ball in front over the goal line and at 8:27 she eluded a defender and headed another shot past Grimes.

“I’m just more comfortable on balls in the air,” said Muire, Rusher’s long-time teammate on middle school and club teams. “Ya know, better at using my head than my feet. Those were big goals because after halftime, it could have gone either way. We just came back harder.”

Rusher indicated that she and Muire have a sort of cosmic connection.

“It’s always been that way,” she said. “Get the ball to Piper and she’ll score.”

Rusher closed the scoring as the final horn sounded, hoisting a 40-yard bazooka shot that sizzled past everyone and crossed just under the crossbar.

“Her older sister Kathryn was a center-back for me a few years ago,” Parrish said. “Lillie wears the same number and the same bow in her hair. When Kathryn was like a sophomore, she told me her sister in the sixth grade was already better than she was. Coming from an all-conference player, that said something.”

It did — and so did this early-season rout.

“It was a good gauge for where we stand,” Muire said. “We’ll see what comes next.”