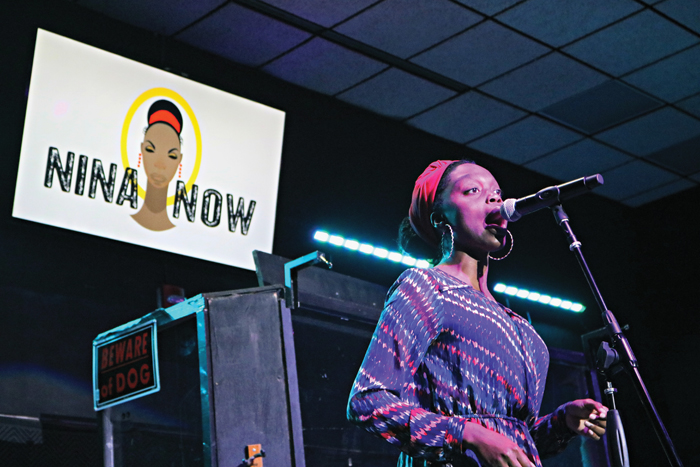 Destiny Stone sings at one of her Nina Now performances on the week of Nina Simone's birthday, Feb. 21. (Courtesy of Rebecca Doherty)

SALISBURY — Destiny Stone says her tribute show to North Carolina-born singer Nina Simone is “not just entertainment” because Simone was “not just an entertainer.”

“Once I have you there, I want to make it worthwhile,” Stone said.

Stone, a junior music business major at Catawba College, said every music major has to complete a senior project that showcases what they’ve learned. But Stone wanted to go beyond what most students do.

“I just really wanted to be creative and do something different,” Stone said.

She chose to do her senior project a year early so she could honor Simone on the week of what would have been Simone’s 85th birthday.

Beginning in the 1960s, Simone used her music to speak out for equality and became an important activist in the civil rights movement.

“I really liked her, and I knew she wasn’t as well-known as some other artists, like Aretha Franklin. And (Simone) was a pianist; I’m a pianist. And she’s from North Carolina, and I was like, ‘That’s perfect for me because I’m in college in North Carolina,’” Stone said.

Stone and her friend Sarah Smith — who is acting as Stone’s student manager for the project — set up the show so it runs in three parts, each of which will reflect a different part of both Stone’s and Simone’s music.

“Nina Simone’s style is very eclectic. Like, she has some styles that are really bluesy and then some songs are really jazzy,” Stone said. “It’s 15 songs. The first 10, I cover her songs, and then the last five are my songs that I wrote.”

Stone said she considers her style to be “soulful,” “jazzy” and “gospelly.”

“And it’s called ‘Nina Now,’ so you get the Nina and the now, which is me,” Stone said.

Stone said she has been “fascinated” and “really deeply inspired” by Simone. In addition to Simone’s musical career, her activism struck a chord.

“Seeing how her career just collapsed when she started being involved in the civil rights movement and, unfortunately, people didn’t want her to sing about social issues or things like that,” Stone said.

Stone said she continues to grow as an activist herself. She performed at the Salisbury March for Love in 2016 and has performed at multiple NAACP meetings.

“I know one of the things that (Simone) says is, ‘My people need all the love they can get.’ And I just love that because she didn’t really care about the money. She wanted to do what she thought was right,” Stone said.

Smith, who also is working on the show for her senior project, said Simone’s music still has things to teach us.

“It’s extremely disheartening that songs (Simone) wrote 50 — give or take — years ago are incredibly relevant to the issues we have right now,” Smith said. “For the last few years, we’ve had this kind of blind illusion that everything was fixed and everything was fine. And it’s become crystal clear that that’s not the case.”

Smith said she and Stone are putting on the performance to “bring to light all of the people that helped try to solve the problem the first time around.”

In addition to videos explaining Simone’s story between each of the parts, Stone said there will also be a “talk back” at the end of the performance that will give the audience the chance to ask questions.

“If you get a little uncomfortable about racial issues or any of the things I sing in my songs — I just want you to think,” Stone said. “I don’t want to make people angry. I’m not trying to start a riot. But I do want people to think, ‘What am I doing? Am I helping this discrimination? Am I helping this cycle of bigotry and prejudice?’”

The performance is free and will be at 5:15 p.m. March 12 at Hoke Hall on the Catawba College campus. Doors will open at 5 p.m.

For more information on the show, go to www.ninanow.org.

Trio performs for Lunch and Listen at Morgan Ridge…