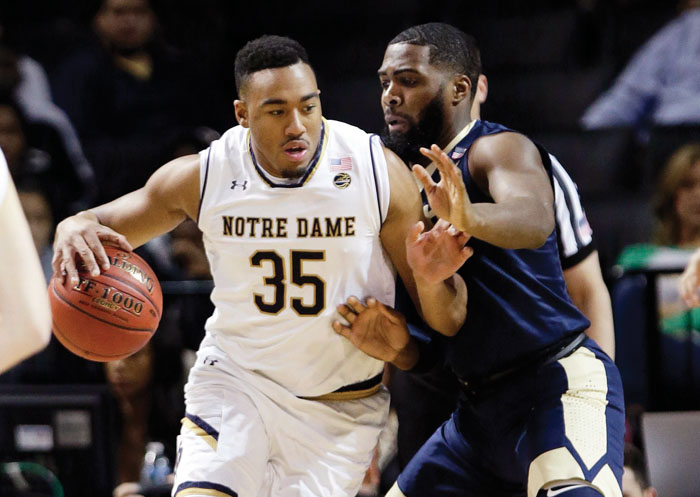 Pittsburgh's Jared Wilson-Frame (0) defends as Notre Dame's Bonzie Colson (35) works the ball during the first half of an NCAA college basketball game in the first round of the Atlantic Coast Conference tournament Tuesday, March 6, 2018, in New York. (AP Photo/Frank Franklin II)

NEW YORK (AP) — Bonzie Colson arrived at the Atlantic Coast Conference Tournament ready to play as much as Notre Dame needs him this week in Brooklyn. The broken left foot that cost him 15 games this season is no longer an issue.

The Fighting Irish needed Colson more than expected Tuesday against a Pittsburgh team that finished 0-19 against ACC opponents.

Colson scored 19 points in 33 minutes and Notre Dame held off Pitt 67-64 in its tournament opener.

Notre Dame coach Mike Brey, who earned his 500th career victory, said there are no restrictions on Colson.

“No, he’s ready to roll,” Brey said. “Hey, I’m going to get my money’s worth out of his eligibility.”

Colson broke his foot in practice one game into the ACC season and the Irish went 6-9 without him. He returned last week to play the final two games of the regular season. Against Pitt, the preseason All-American looked OK in a game that was no thing of beauty for the Fighting Irish. Colson’s turnaround jumper was working early and he leaned into defenders for a couple more buckets. He finished 5 for 14 from the field, grabbed six rebounds and looked stylish in his emerald green sneakers with shiny gold trim.

Notre Dame never could put Pitt away, shooting 4 for 24 from the field in the second half. Things got dicey in the final two minutes.

Jared Wilson-Frame made a 3 from the left wing for Pitt with 1:34 remaining to cut the lead to 61-58, and he missed another 32 seconds later. After a couple free throws by Notre Dame’s T.J. Gibbs Jr., Marcus Carr hit a 3 to draw the 15th-seeded Panthers within 63-61.

Wilson-Frame and Carr each scored 18 points.

Colson made two from the line with 22.3 seconds left after a loose-ball foul on Carr that drew loud complaints from Pitt coach Kevin Stallings. Carr lost the ball on Pitt’s next possession and Notre Dame closed it out without further drama.

Matt Farrell, who also missed five games with an ankle injury while Colson was sidelined, scored 18 for the Irish.

“Yeah, we feel we’ve come through more adversity than anybody in the country, but our guys have fought hard all year, and I think it’s made us mentally tough,” Farrell said.

The Irish improved to 13-4 with Colson in the lineup and are hoping a good showing here at the Barclays Center, where they are now 8-1, will convince the NCAA Tournament selection committee that, with a healthy Colson, they deserve a spot in the field of 68.

Pitt: Will Stallings be back for a third season with the Panthers? Firing a coach after two seasons is odd, but Pitt has been historically bad this season. Plus, Stallings got into some trouble earlier in the year when he taunted a Louisville fan with a reference to paying players. On top of it all the athletic director who hired him, Scott Barnes, left for Oregon State last year.

Stallings said he does not know what his future holds and does not believe he has to sell his vision for the program to AD Heather Lyke.

“We had to turn over an entire roster. And we knew this was going to be a little bit of a tough season; we didn’t know it was going to be this tough,” Stallings said. “I’m certainly not ashamed of it or apologetic for it. I’m proud of these guys.”

Stallings, who left Vanderbilt for Pitt, is 24-41 and 5-34 against ACC opponents.

Notre Dame: The Fighting Irish had little to gain and everything to lose against Pitt, but they took care of business, shooting 26 of 31 from the free throw line.

Notre Dame: The Fighting Irish lost 80-75 to Virginia Tech in South Bend, Indiana, without Colson and Farrell in late January.

Brey said Notre Dame will need to take advantage of its size and be better guarding the 3-point line to have a different result this time around against the Hokies.

“You know, it’s easy to say,” Brey said. “It’s hard to do with Virginia Tech. They are really explosive.”