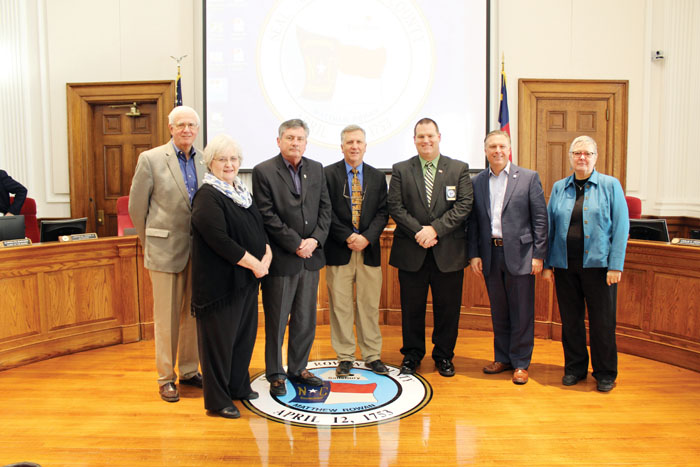 Jeff Hall, center, and Sammie Hinshaw, second from left, celebrate with county commissioners a $15,000 donation to the western Rowan library project. The Friends of the Rowan Public Library made the contribution. Andie Foley/Salisbury Post

SALISBURY — Rowan County Commissioner Jim Greene said it was a “day for Cleveland” at Monday’s Board of Commissioners meeting.

The title was fitting, as two major developments in the growing town moved forward. One was approval of an incentive grant that could help bring new jobs to the Freightliner truck plant.

Another was the pursuit of a library branch in western Rowan County — a project library Director Jeff Hall said has been 38 years in the making.

Commissioners on Monday formally endorsed the project, allowing the county attorney and manager to move forward on acquiring the a home for the library, the soon-to-be-vacated auditorium and media center of Cleveland Elementary School.

“Reusing an old building is a great thing,” said Commissioner Judy Klusman. “I’m glad that you took a hard look at that. It’s going to save money and will get the project done that much quicker.”

Hall said the county library served the West Rowan area with a bookmobile from 1911 until 1991, when an increase in the number of working mothers reduced the number of families the outreach was serving.

Since that time, the library has continued to offer services to that part of the county, first through an honor system at Cleveland Town Hall and then through an adjacent 100-square-foot office space.

But many remain distanced from valuable resources at the library’s main branches, Hall said.

“Currently, the citizens of the most populous areas of West Rowan must travel at least 10 miles … to come to the main library,” he said. “Looking at those ZIP codes, we determined there’s a population of close to 11,000 people there.”

The proposed library will house thousands of books and magazines and offer digital content such as audiobooks, eBooks and video.

It will also have broadband internet service, available in the building and in the parking lot 24 hours a day, Hall said.

Library staff members plan to outfit the old auditorium into a meeting space with three rooms and a kitchen for catering service — something else lacking for West Rowan residents. The renovation will also include the addition of accessible restrooms to join the two spaces.

“Economic conditions drive a lot of these things, and right now we’re in a position where we can do the things that we should have done a long time ago,” said Commissioner Craig Pierce. “There’s a lot of projects throughout the county that should have been done decades ago, and this is one of them.”

Hall said the town of Cleveland has already assured him of its support and involvement with the project. The Friends of the Rowan Public Library also stepped forward in support, offering $15,000 after the commissioners’ endorsement.

Friends of the Rowan Public Library President Sammie Hinshaw presented the county with the money to “kick off fundraising,” she said.

“We hope this comes to a complete end in a few years,” said Hinshaw.

In other business at Monday’s commissioners meeting:

• The board approved a conditional-use permit for a 1,512-square-foot residential storage facility on Thompson Road.

• It approved amendments to the Water System Management Plan for management of the Northeast Rowan Water System, specifying the standards and requirements for connection to the system.

• The commissioners approved a special nonresidential intensity allocation request from Teramore Construction for construction of a Dollar General at East N.C. 152 and Kress Venture Drive.

• They allocated $80,000 to the Grow Rowan marketing campaign.

• They scheduled a public hearing for a fire protection district transfer between the Rowan-Iredell and Scotch-Irish fire districts for April 2.