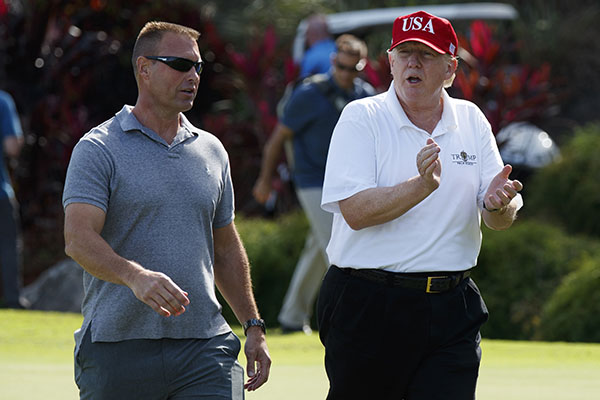 President Donald Trump walks with Gene Gibson, commanding officer at Coast Guard Station Lake Worth Inlet, as he arrives to meet with members of the U.S. Coast Guard, who he invited to play golf, at Trump International Golf Club, in West Palm Beach, Fla., in December 2017. (AP Photo/Evan Vucci, File)

Politicians break campaign promises all the time. Some are big promises; some are small. But few have been broken as completely, as brazenly and as casually as Donald Trump’s promise not to play golf, or at least not to play a lot of golf, as president.

Candidate Trump told campaign crowds many, many times that a President Trump would be so busy serving the American people that golf would be out of the question.

“I’m going to be working for you,” he told a campaign rally crowd in August 2016. “I’m not going to have time to play golf.”

It hasn’t turned out that way.

The White House is not particularly forthcoming about what the president does when he visits one of his golf courses, so it is not possible to say with absolute certainty how many times he has played. “No word on the president’s activities at the golf club,” read one recent White House pool report on a visit to the Trump International Golf Club in Florida.

But Trump has visited one or the other of his golf properties about 100 times so far, often on beautiful days. It’s reasonable to guess that most of those 100 visits to golf properties involved playing at least a few holes.

It’s a significantly faster clip than Barack Obama’s golf numbers. By a count from CBS’s Mark Knoller, a keeper of presidential records, Obama played 29 rounds in his first year in the White House. But Obama speeded up; according to Knoller, he played 64 rounds in 2016, his last full year in office. Obama’s total for two terms was 333 rounds.

Although it’s impossible to say for sure, Trump’s first-year total could be in the ballpark of Obama’s final-year total. The problem for Trump, of course, is that he slammed Obama repeatedly for playing so much golf.

Trump was not the only critic of Obama’s golf habits. There were others — like me. During the Obama years I often tweeted about Obama’s trips to the course.

In August 2011, I tweeted, “Obama motorcade leads reporters on winding drive to … guess what? More golf.”

In April 2012, I tweeted, “Obamacare in peril, hot-mic embarrassment, economy still terrible. For Obama, there’s only one answer: golf.”

In 2013, I tweeted, “Now watch this drive: Pretty amazing Obama would make big statement on Syria, then head straight to golf course. But that’s what he’s done.”

The now-watch-this-drive part was a reference to an infamous moment in the George W. Bush presidency in which Bush, beginning a round of golf, spoke to reporters on the first tee to denounce a foreign terrorist attack. With barely a beat in between, Bush segued to “Now watch this drive.”

The cringeworthy moment was featured prominently in the Michael Moore anti-war documentary “Fahrenheit 911,” and led to Bush’s deciding to forgo golf for the rest of his presidency.

At other times, I remarked that Obama did not cheat at golf; that he had avoided a golf embarrassment like Bush’s; and that he mostly stayed away from fancy, exclusive clubs.

I noted Obama’s golf so much because many liberals had held Republican presidents to account for their golf — for their devotion to a supposedly rich-guy, country-club sport that revealed just how elitist and out of touch with ordinary Americans they were. In light of that, Obama’s love of golf needed some attention, too.

Now, Trump’s golf gets plenty of press. In the last 48 hours, it has been in stories on CNN, the New York Post, Mother Jones, Pro Publica, Slate, Salon, the Daily Beast and more.

Some people play golf to play golf. Obama seemed to do that; he mostly played with a small group of friends, rarely joining members of Congress or others with whom he might discuss work. Trump, on the other hand, seems to come from the world of business golf: Play golf, yes, but also do business. He has famously played — and negotiated — on the course with lawmakers like Lindsey Graham and Rand Paul, and with members of his administration.

Trump made that point in that November 2016 statement in which he noted Obama had played about 300 rounds. “Hey look, it’s good,” Trump said. “Golf is fine. But always play with leaders of countries and people that can help us. Don’t play with your friends all the time.”

It was the most moderate thing Trump said about Obama and golf. Now that he is president, Trump’s golf is under near-daily scrutiny. Given the broken campaign promise ,how could it not?