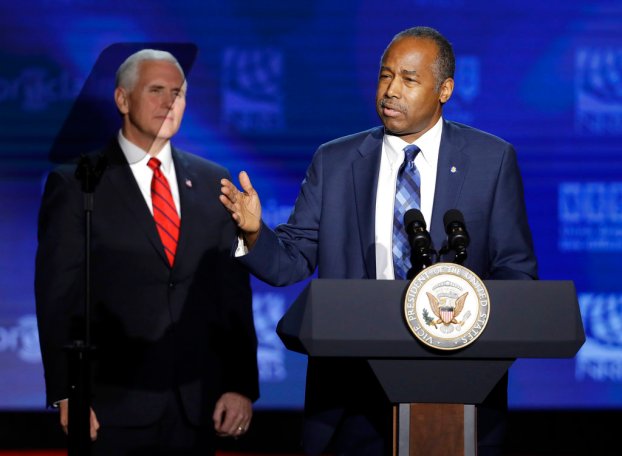 Ben Carson and the Trump lifestyle

An excerpt from an editorial in The Baltimore Sun:

It never pays for public officials to appear to be living high on the hog. Well, almost never. At least that’s the advice we should have given a certain former Johns Hopkins neurosurgeon who took up politics only recently and now finds himself defending a $31,561 dining room set the taxpayers purchased for his office suite at the U.S. Department of Housing and Urban Development. And, apparently, he didn’t even get to pick it out.

The problem, of course, is that while the agency in charge of helping the poorest Americans find decent housing was ordering a custom-made table for the secretary’s personal space, HUD officials were also planning how best to make substantial reductions to programs that help the elderly and homeless.

And, worst of all, people noticed. A senior agency official claims Dr. Carson’s wife, Candy Carson, has spearheaded an effort to spend lavishly on that same office space — even if it means going around federal rules that require congressional approval for any spending on a department head above $5,000 — and the official filed a whistleblower complaint about it.

Not good, right? You are about to make decisions about how many Americans deserve to live on heating grates and in cardboard boxes while simultaneously picking out that just-so mix of mahogany and leather. Dr. Carson’s defense is that he didn’t have much direct involvement (it was a Charm City-based federally approved contractor picking out that fancy dining room table, by the way) and that the cost isn’t out of line for such furniture. Here’s what his defense should be: I’m just following the example set by my boss and fellow Cabinet members. …

EPA Administrator Scott Pruitt doesn’t fly coach when on government business; he goes strictly first class, lest he be seated next to an irate passenger. Apparently, rolling back environmental protections has its price in rude behavior from the little people who favor clean air and water but can’t afford an upgrade when they fly. Where in the world did Mr. Pruitt get the idea it was acceptable to travel on the public dime with the champagne set? Maybe it was from former Health and Human Services Secretary Tom Price, who racked up a $1 million tab using private and military planes.

Laurels to those who are taking action to curb the sale of semiautomatic firearms without waiting for government action. Last... read more