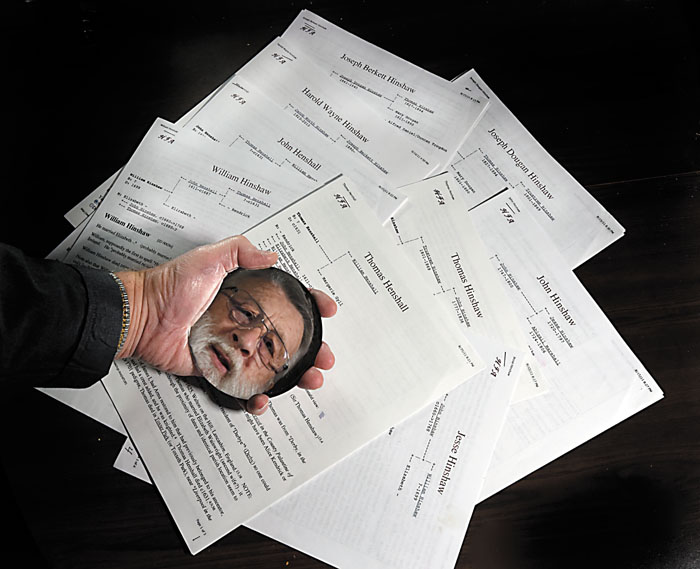 Wayne Hinshaw's reflection in a handheld mirror with the paper work of the nine generations of his Hinshaw forefathers who emigrated from Northern Ireland in 1767 getting to NC in 1768. photo by Wayne Hinshaw, for the Salisbury Post

Have you ever wondered, “Who Am I?” “Where did I come from?” “Who were my ancestors?”

I have done some research on my ancestors to answer those questions, and I have found that my ancestors were immigrants. All Americans are the product of immigrations unless you are a descendent of a Native American. All of our forefathers came from somewhere, having to cross the oceans in ships years ago. Some came for freedom, some came for religious reasons, and some came on slave ships against their will.

My earliest forefather that I have found was Thomas Henshall. Sometimes it was spelled Henshawe or Henshaw. I don’t know when Thomas was born, but he died in 1631 in Northern Ireland. Apparently, he was knighted as Thomas Henshall from Derby in the County of Palantine of Lancaster. He had  7 children.

His son, William Hinshaw was the first to spell his name Hinshaw. He died in 1699.

Jesse and his wife Abigail Hinshaw were born in Northern Ireland. According to the church records from the Society of Friends (Quakers), they emigrated to North Carolina in 1768. The Friends’ records show that Jesse’s cousin Absolem Hinshaw also intended to move to America at the same time. In Northern Ireland, at the time, Quakers were having difficulties in the communities because of their religion and practices.

With no direct evidence that the Hinshaws were being harassed in Ireland, I would assume that they were experiencing problems to make the decision to travel to America.

Here again, I have no information where my forefathers arrived in America, I again assume they most likely traveled to Pennsylvania. William Penn had founded the state of Pennsylvania for a safe state for Quakers to practice their religion in peace. As the Quaker population grew in Pennsylvania, they began experiencing trouble from other citizens. Most did not agree with the Quakers’ beliefs. Quakers were forced to practice their religion at home to avoid trouble.

As early as 1743, the Quaker migration from Pennsylvania to Maryland, Virginia and North Carolina had started, again looking for religious freedom without harassment. Meeting houses were established in Bladen County, N.C., and central counties in the state. Cane Creek Monthly Meetings began in Orange County, N.C. Land was inexpensive and the climate was mild compared to northern winters.

My forefathers, Jesse and Abigail, were received by the Friends at Cane Creek Monthly Meetings in Orange County on Feb. 4, 1779, a year after leaving Ireland. While there, the couple had two children.

John Hinshaw was born on June 2, 1777 in Randolph County in the Marlborough community. That community was only a few miles from where I grew up close to Randleman. John and Ruth had seven children. Church records show that John and his family were granted a certificate to move to White Lick, Indiana. Son Benjamin was not included since he had been disowned in 1830.

The Quaker migration to “free states” Ohio, Indiana and Iowa was in large numbers because the  Quakers found it impossible to continue living in the North Carolina slave society. Some entire congregations moved west. Their belief was in pacifism and mankind’s spiritual equality. Their belief was in dressing very plainly and with a worship style based on the silent waiting for the Lord.

The Quakers took a firm stand that the institution of slavery was not acceptable.

The Friends could not compete with North Carolina neighboring farms who used slave labor from an economic standpoint. The slave-holding neighbors were often very hostile to the Friends which also contributed to great numbers leaving North Carolina, going to the west and northwest.

After 1776, you were not allowed to be a member of the Religious Society of the Friends and own slaves. The Quakers became the first church to ban slaveholding by its members. Quakers would not buy and sell their goods made by slave labor. (Goods such as cane sugar, cotton, and indigo dye.)

John’s son Trustrem Hinshaw was born on Nov. 6, 1801, in Marlborough in Randolph County. He married Martha in 1823.

The 1830 census report on the family reads:

In 1860 census, Trustrem’s was listed as a farmer owning $600 in real estate and $800 personal property. It listed his children as “attending school.”

I have no direct information about my forefather, Thomas, during the Civil War. Most Quakers in the South were pacifists, but they were loyal to the United States and opposed to slavery. Many were suspected of being Union sympathizers and part of the Underground Railroad moving slaves from the South to free states in the north.

Most were neither sympathizers nor Underground Railroad members but all were suspected.

Again, I have no record of my great, great grandfather and the hardships during the Civil War. Many Quaker men were arrested and taken to Confederate military camps because they refused to join the military or bear arms. Some received cruel punishment. Many were known to quote the Bible while being punished by saying “Father, forgive them, for they know not what they do.”

There was another Thomas Hinshaw from the Civil War time period that was forcibly conscripted into the Confederate Army along with his brother Jacob who was able to later write his story about his life of hardships in the Confederate Army. He is listed in the 1860 census from Randolph County. Jacob is also noted to be from Randolph County. It is interesting reading his writings about their ordeal serving as teamsters, driving the wagon teams at the battle of Gettysburg. They refused to fight but would not desert. I can find no evidence that I am related to this Thomas Hinshaw. They were members of a Friends Society in Eastern North Carolina.

Joseph Dougan Hinshaw (my great grandfather) was born in Randleman in 1861 and married Amanda Cornelia Trogdon. In 1900, he was a “stationary engineer” owning his home and having seven children. “All had attended school for two months.”

The 1910 census showed he had eight children. His 12-, 14-, and 17-year-old daughters worked in a hosiery mill. His 16-year-old son worked in a chair factory. Joseph died at the age of 78, and his wife Cornelia died three days later.

My grandfather, Joseph Berkett Hinshaw, who went by the name “Bart,” was born in Randleman on June 23, 1890. At the age of 26 in 1917, he registered for the WWI draft. He was not a Quaker. He was a self employed farmer. His military record said he “was tall, slender, blue eyes, light hair, slightly bald.” His wife (my grandmother), Loraine Bowman was born in March 1893. She was called “Sweet” by everyone who knew her.

In 1920, Bart was 30, renting his home and working as a shop hand in a High Point chair factory. He had one daughter, Juanita, who was two years old in 1920.

The 1930 census says Bart was 30, owned his home, “had no radio in the home,” and was a lumberman at the furniture company. He had three children with “all attending school.”

Bart died from diabetes around the age of 43-45. I never knew my grandfather, since he died before I was born. Loraine died at age 78 in 1971. She was a wonderful lady who felt like she needed to attend all the funerals in Randleman even if she didn’t know the person.

My mother worked for a hosiery mill, was a bank teller, office manager at an A&P grocery store, and retired working for the City of Asheboro in the water department.

My Dad was rejected for the military during WWII because of his terribly flat feet.

This answers some of my questions of “Who am I” and “Where did I come from” and I now know some of my ancestors.