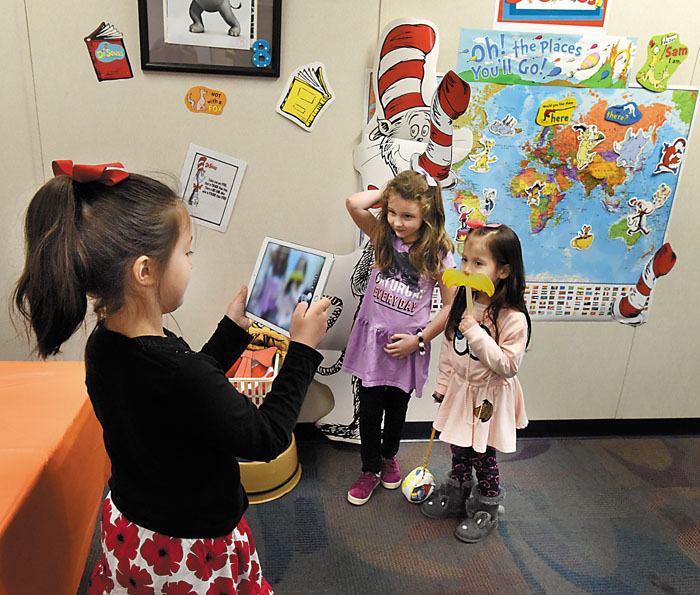 Six-year-old Alex Foster takes a photo of Madison Grimes, 6, and Vida Mejia, 5, posing with the Cat in the Hat at the East Branch of the Rowan Library celebrating Dr. Seuss' birthday. Photo by Wayne Hinshaw, for the Salisbury Post.

The 114th birthday of Dr. Seuss (Theodor Seuss Geisel) was celebrated at an annual event at the East Branch of the Rowan Public Library on Saturday. Dr. Seuss died in 1991 at the age of 87.

Children’s Librarian Associate Tammie Foster created the program for the 5th celebration at the library.

To start the party, the children had a chance in a “Match-a-Roo” to match the names of 10 of Dr. Seuss’ characters with their photos that were displayed on the walls of the library.

Told they were going outside for a parade, the children gathered up posters and pom-poms and placed Seuss’ character hats on their heads. They marched around the library with as much enthusiasm as you might expect at a party.

Some of the children had their photos taken wearing Dr. Seuss’ character hats for the library website by six-year-old Alex Foster, the librarian’s daughter, who was a helper.

The children settled into their chairs or on the floor to hear the reading of Dr. Seuss’ book “Horton Hatches an Egg” by Foster. Absorbing every word of the story, with their big eyes alert and watching the video pages of the book being projected on the screen, there were “oohs and aahs” to be heard in the darkened room as they reacted to the words of the story.

With the drawing of numbers, several lucky youngsters got to pick a free book.

More prizes were given as questions were read from the book, “Dr. Seuss Trivia Quiz.” The questions were based on facts from Seuss’ books such as: “Where do peanuts grow?” “How old do you have to be to vote?” “Is it true that only redheads can wiggle their ears?”

This program at the library coincides each year with the public school’s “Read Across America Week” which is this week. At the party, a different Dr. Seuss book is read each year. Foster explained that the Dr. Seuss books “have so much to offer to children.”

Many Seuss’ quotes have very thoughtful meanings. Here are some examples: “A person’s a person no matter how small.” “There is no one alive who is YOU’ER than you.” “You have brains in your head. You have feet in your shoes. You can steer yourself any direction you choose.” And “Don’t cry because it’s over. Smile because it happened.”

Dr. Seuss is remembered as an American author, political cartoonist, poet, animator and artist, creating over 60 children’s books during his career. Some of his books are “If I Ran the Zoo,” “Horton Hears a Who!” “If I Ran the Circus,” “The Cat in the Hat,” “How the Grinch Stole Christmas,” and “Green Eggs and Ham.”