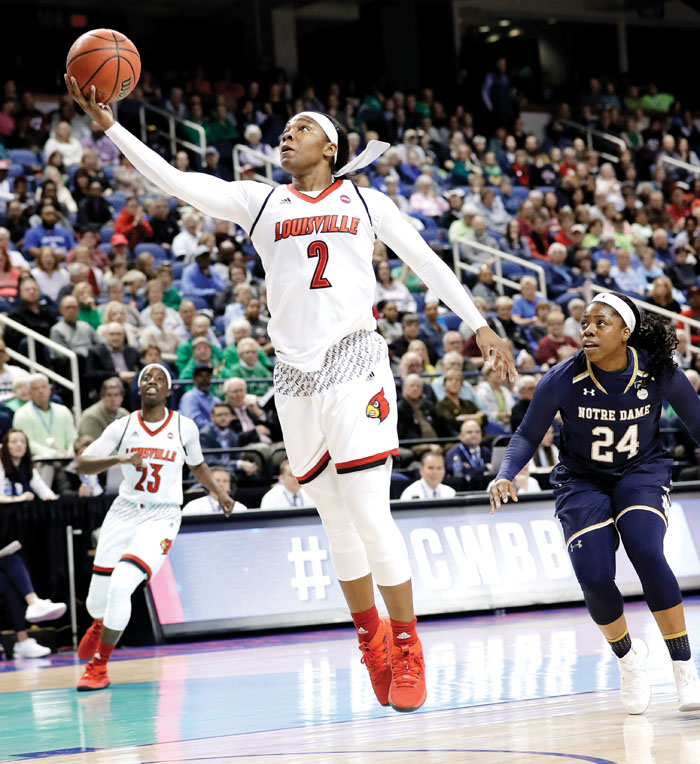 GREENSBORO (AP) — Louisville coach Jeff Walz clipped the final piece of net, twirled it over his head and flung it back toward the court. Myisha Hines-Allen proudly wore it around her neck.

Savor it, Cardinals. For the first time in a quarter century, you can call yourselves conference tournament champions.

“I’ve been saying it over and over again,” said Durr, the ACC’s player of the year. “I’m speechless. I’m just in awe.”

Durr, the ACC’s player of the year, hit four free throws in the final seconds to help the top-seeded Cardinals (32-2) win their first conference tournament since 1993 in the Metro Conference.

“I hope it puts a smile on everybody’s face,” Walz said. “It’s been a remarkable run, but we aren’t finished. … We’ve got bigger fish to fry.”

Jessica Shepard had 23 points and 10 rebounds, and Arike Ogunbowale added 20 points for the second-seeded Fighting Irish (29-3), who failed to win the ACC Tournament for the first time since joining the league. They’d won four straight championship games by at least 11 points apiece.

Notre Dame trailed 65-64 with the ball in the final minute before turning it over on a shot-clock violation with 45.5 seconds left. Fuerhing then hit a layup through contact from Marina Mabrey with 24.9 seconds left and hit the free throw to make it 68-64.

After Shepard countered with a quick jumper, Louisville went 6 of 6 from the free-throw line in the final 18.2 seconds, with Durr going 4 for 4 in that stretch, to seal it.

Notre Dame: The Fighting Irish had to lose an ACC Tournament game sometime, and all those injuries might finally have caught up to them. They essentially played just six players in this one. With those depth issues, winning three games in three days on a neutral court wound up being a pretty tough request.

Louisville: The Cardinals certainly know how to make shots against Notre Dame. They shot 65 percent in a 33-point victory in January that wound up being the tiebreaker for the top seed in this tournament. Louisville shot 45 percent in this one while placing all five starters in double figures, and became the first team since Connecticut in 2015 to beat the Fighting Irish twice in a season.

“You can’t really explain how you feel because it’s such a big win and we knew we needed this win,” Hines-Allen said.

It had been a rough week for Durr, the ACC player of the year who went 6 of 27 — and 1 for 12 from 3-point range — in her first two tournament games. But she made a big shot with her team’s lead in jeopardy.

Notre Dame made it a two-possession game with less than 5 minutes left. After Carter missed a 3, Hines-Allen grabbed the rebound and kicked it out to Durr, who coolly drained a 3 from the key to put the Cardinals up 63-56. “They always tell me to knock that shot down,” Durr said.

Television cameras caught a tense moment when the coaches met during the handshake line. Walz said Notre Dame coach Muffet McGraw referred to Durr as “the other player that won” the ACC player of the year award instead of Ogunbowale — and the Louisville coach didn’t like it.

“I just wanted to make sure she knew who Asia Durr was,” Walz said. “Just have the common courtesy to say her name. I don’t think there’s anything wrong with that. I’m going to stand up for my player. … Just have the respect to say her name, that’s all.”

Notre Dame, a 36-percent shooting team from 3-point range, was just 3 for 10 and missed seven of its first eight from that distance before Ogunbowale hit two in the final seconds. Mabrey, a 37 percent shooter from that distance, was just 1 of 5 and finished with seven points — half her average. “They really weren’t going to let Marina get free for anything today,” McGraw said.

Notre Dame: Headed to the NCAA Tournament — possibly as a No. 1 seed.

Louisville: Headed to the NCAA Tournament — likely as a No. 1 seed.