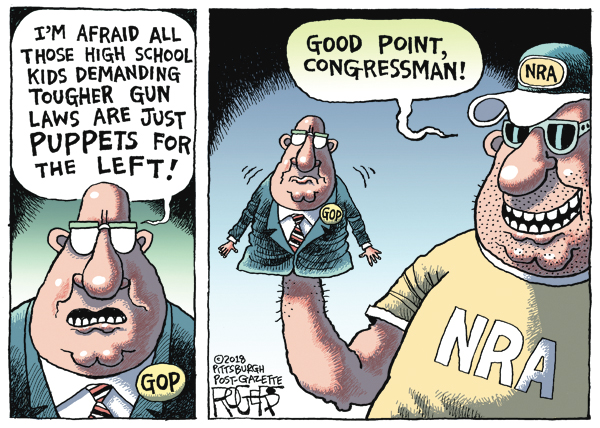 Excerpt from a column by former state Supreme Court Justice Bob Orr, “My party is beholden to the NRA,” published in The Charlotte Observer:

Make no mistake about it, the NRA is an enormously powerful political entity, raking in millions of dollars by promoting itself as the defender of gun rights. On the back end, it plows millions in contributions and political organizing into candidates willing to swear allegiance to the NRA political agenda. Candidates (mostly Republicans but with the occasional Democrat) prostrate themselves before the NRA banner, shamelessly seeking the NRA’s endorsement and political and monetary favors. The amounts given to North Carolina’s leading office holders is staggering and plenty troubling.

Having found a political party willing to be the vehicle for its pro-gun agenda, the NRA has become a political force that Republican candidates and office holders are simply unwilling to renounce. You’d have a better chance of Republicans condemning the FBI, passing trillion-dollar budget deficits and siding with Putin and the Russians long before they’d ever condemn any agenda advocated for by the NRA. Oh, seems that’s already happened.

Last year at the state GOP convention, I sat there watching as announcement after announcement was made of auctions and raffles by local parties for some type of weapon — usually a semiautomatic rifle. I don’t think I’ve ever seen hunting rifles, shotguns or black powder rifles auctioned — only semiautomatic weapons or pistols. I half-jokingly asked the party official next to me, “Do we ever auction off beach trips or rounds of golf or Aunt Minnie’s famous pound cake?” “No,” he said, “the NRA gives us these weapons so that’s what we always auction off.”

I know this will all be construed by NRA stalwarts as anti-gun, and part of some communist conspiracy to take away your firearms. No, the Second Amendment has to be honored regardless of one’s position on guns. But the Republican Party — the party I’ve tried to build and support over the course of my career — seems unable to seriously engage in meaningful action to end the violence we keep seeing across this country from Sandy Hook to Las Vegas to Parkland.

The Party of Guns

Show me one — just one — major Republican figure willing to stand up to the NRA. Show me one willing to say, “I don’t want your support and your money because I do not believe in your political agenda.”

That won’t happen. And that’s why the Republican Party is now identified as the Party of Guns. The #MeToo movement, the DACA issue, Trump and Russia will all ultimately affect the GOP. But I’m afraid that the party will live or die, guns a-blazing, linked eternally at the soul to the NRA and its agenda.