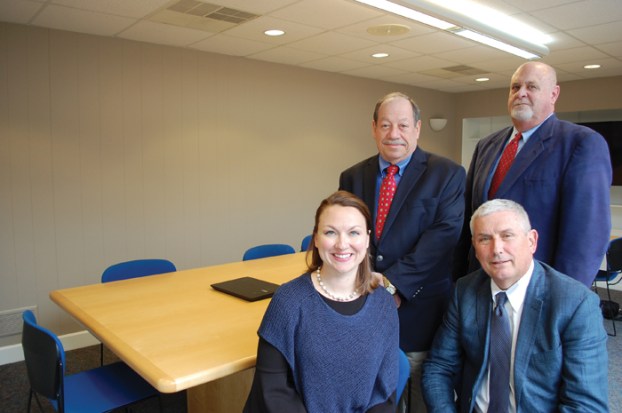 SALISBURY — After spending years apart, Doug Jones, Keith Hiller and Gerald Dillard have come together under one roof.

“And so they were both in close proximity and we were trying to decide how we could really become one team in Salisbury,” said the group’s CFO Katy Hiller Ringeman. “And we thought by having one common storefront where we can better service our clients would be perfect.”

The three are now operating under a new name, Hiller Ringeman Insurance, and have merged their offices at 1515 West Innes St. across from DJ’s Restaurant.

“We closed, remodeled and moved in in 30 days,” Hiller said.

Since the company moved into the new building in early November, Hiller said it’s been good to have the staff under one roof.

“Gerald and his wife were really the main staff in his office,” Hiller said. “It was hard for them to get out of the office to see more people in town because they’re taking care of their customers there. And so it just helps a lot, I think, by being together so we can all get out and be more involved in the community.”

“And it allows us to leverage the skills that each individual has,” Ringeman said. “So the experience that Gerald has and the experience that Doug has, bringing it all together under one roof gives them an opportunity to really do what they do best individually without duplication of efforts.”

Jones and Dillard both said commercial insurance is one of the things they’re most excited to focus on.

“Because you get so tied up with the auto and the home piece of the puzzle, you don’t have time to do it all,” Jones said. “So now that we’ve joined forces, it allows us the opportunity to get out and meet new clients.”

Dillard said he also is looking forward to having more time to work with his clients.

“Before, you were behind when you come through the door. Now, we’ve got people who can cover the phones and we can work on one account for a while,” Dillard said.

Hiller, Jones and Dillard said their customers are what make their jobs worthwhile.

“We secure the financial stability of families. If a house burns, we’re there to help. If somebody gets hurt, we’re there,” Hiller said. “We’re there to help protect the needs of the families to make sure they continue living the lifestyle that they’re accustomed to.”

Ringeman said that, in addition to wanting to merge the two Salisbury offices, the group wanted to buy the Innes Street building to “invest in Salisbury.”

“We see it as an up-and-coming area. The downtown is really thriving right now and we’re hoping it’ll push this way some,” Ringeman said. “And so we invested our resources, obviously financially, in the building itself and in our people.”

Hiller said they have “lots of room” in the new building, which is about 6,400 square feet. He said he hopes the group continues to grow into it.

“We haven’t hired new people yet, but we’re constantly looking,” Hiller said. “And once we get two or three more sales people, then we’ll have to expand clerical staff and hopefully we’ll have 13 or 14 people here in the not-too-distant future.”

Hiller Ringeman Insurance’s Salisbury location can be reached at 704-636-6787.