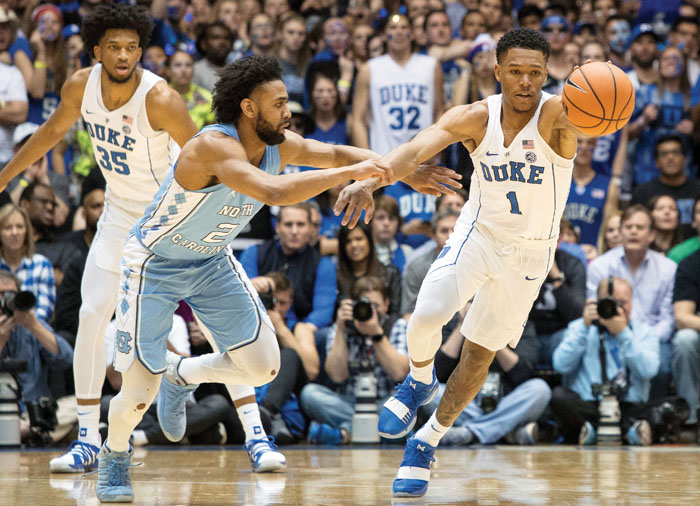 AP Photo/Ben McKeown ... Duke’s Trevon Duval (1) reaches for a loose ball ahead of North Carolina’s Joel Berry II (2) during the first half of a Saturday night’s college basketball game in Durham.

DURHAM (AP) — With No. 5 Duke trailing its fiercest rival and struggling to match the magnitude of the moment, coach Mike Krzyzewski had a simple message for his team.

No pressure — and no set plays, either.

“Take the pianos off your back, quit playing with all the pressure in the world, get a smile on your face,” Krzyzewski said. “Just play.”

Grayson Allen added 15 points in his final game at Cameron Indoor Stadium, and Gary Trent Jr. had 13 points — including three 3-pointers in the final 10 minutes — to help the Blue Devils (25-6, 13-5) clinch the No. 2 seed in the Atlantic Coast Conference Tournament.

Duke was 8 of 15 from 3-point range in the second half — the Blue Devils made just 1 of 10 from that distance in the first half — and outrebounded North Carolina 24-13 after halftime.

“They kicked our butts in the second half,” UNC coach Roy Williams said.

Cameron Johnson scored 16 points for the Tar Heels (22-9, 11-7), while Kenny Williams and Luke Maye each had 13. Three weeks after they rallied from a double-figure deficit to win the rivalry’s first game, it was the Blue Devils’ turn to flip the script.

Duke trailed by 11 with 14 1/2 minutes to play, but once the pressure started to fade, the ACC’s top offense finally found its rhythm.

“I’m not going to call any plays,” Krzyzewski said he told his team. “If you hit, cut, everybody touch the ball, you see a play to make, you make the play. And get comfortable in the game. And they did that. You could see them do that.”

The Blue Devils hit four 3s in 4 1/2 minutes to erase that deficit, and that came early during the 25-10 burst keyed by six 3s that put them ahead to stay.

North Carolina: The Tar Heels had a chance to spoil Duke’s Senior Night for the third time in their last four regular-season-ending visits to Cameron, and sweep their fiercest rivals. Instead, after too many missed shots at inopportune times, they’ll enter the postseason on a two-game losing streak.

Duke: This very well might have been the final game at Cameron for a good chunk of the starting five, with Allen — the team’s lone senior — surrounded by three potential one-and-done freshmen and Krzyzewski acknowledging in the leadup to the game that “it’s the last game probably for a few of our other kids, too.” The offense came alive just in time to send Allen — and maybe the others — out the way they wanted.

North Carolina, which tied a program record with two turnovers in the previous meeting on Feb. 8, had much more trouble taking care of the ball in this one. The Tar Heels had 14 turnovers and the Blue Devils turned them into 15 points.

The Tar Heels also set a program record under Williams by taking 33 3-pointers in the first meeting, and put up 31 more in this one against Duke’s 2-3 zone defense. But they only made eight — three after halftime — and the most conspicuous stat line belonged to Berry, last year’s Final Four Most Outstanding Player who finished 0 for 7 from 3-point range. “I don’t like shooting 31 3s,” Williams said. “That’s not who we are.”

Duke had missed 13 of its first 14 3s before Trevon Duval and Allen connected on back-to-back possessions near the 13-minute mark and made it a two-possession game. Then, after Johnson missed a 3-pointer, Bagley finished off a pretty feed from Duval for a dunk that pulled the Blue Devils to 46-43 and reclaimed the momentum for good. “Marvin went nuts there for a while and just put us on his back,” Krzyzewski said.

North Carolina: Earned the No. 6 seed in the ACC Tournament and will play the Wake Forest-Syracuse winner on Wednesday night.

Duke: As the No. 2 seed in the conference tournament, the Blue Devils will play either Notre Dame, Pittsburgh or Virginia Tech on Thursday night.

SYRACUSE, N.Y. (AP) — Syracuse finally won a close one at home, and it couldn’t have come at a better time.

Oshae Brissett and Tyus Battle each scored 17 points and Syracuse rallied to beat No. 18 Clemson 55-52 on Saturday to remain in the hunt for a postseason berth.

It was an opportunity for Syracuse (19-12, 8-10 Atlantic Coast Conference) to fill the biggest void on its resume — the lack of a marquee win — and the Orange capitalized. They were coming off a 15-point loss at Boston College, which put a big dent in their postseason hopes.

“It was extremely important, the biggest win we’ve had all year,” said Battle, who surpassed 1,000 career points with a second-half flurry that jumpstarted a sluggish offense. “For us to gut that one out and get the win is good for us.”

It won’t erase the memory of a four-point loss to North Carolina, a two-point loss to Notre Dame, and an overtime setback to St. Bonaventure, all in the normally friendly confines of the Carrier Dome. At least the anxiety factor dissipated somewhat heading to the Atlantic Coast Conference Tournament next week.

Clemson (22-8, 11-7) entered the game ranked eighth in RPI and already assured of its first NCAA Tournament berth in seven years. The Tigers finished 4-6 on the road and suffered just their second loss this season after leading at halftime.

“They just outplayed us in the second 20 minutes,” Clemson coach Brad Brownell said. “It was hard to score out there.”

Marcquise Reed had 21 points and Elijah Thomas 18 to lead Clemson as the pair accounted for all 27 Clemson points in the second half. Gabe DeVoe was 2 of 13, 0 of 6 from beyond the arc, for four points, and Shelton Mitchell failed to score despite playing all 40 minutes. DeVoe was averaging 13.3 points and Mitchell 11.9.

Brissett broke a 50-all tie with a pair of free throws after Aamir Simms had missed a corner 3 and Brissett was fouled by Thomas while snaring the rebound. Two free throws by Paschal Chukwu gave the Orange a four-point lead with 90 seconds left, but Reed converted a fast-break layup with 43.6 seconds to go after a miss by Battle to draw Clemson to 54-52.

After Battle missed again at the shot-clock buzzer, Brissett blocked Reed close in with 3.4 seconds left and the Orange survived when DeVoe’s 3-point attempt at the buzzer caromed off the rim.

“You don’t want to give them easy buckets,” Brissett said. “We were able to get our hands up.”

Syracuse’s big three of Battle, Howard, and Brissett combined to shoot 5 of 19, (26.3 percent) for 15 points in the first half, but they all came alive in the second.

Battle scored eight straight points to key an early surge that put the Orange back in front and got the season-high crowd of 28,670 roaring. He drained 3-pointers on consecutive possessions and hit a jumper in the lane before Brissett converted a three-point play to give the Orange a 33-30 lead. Howard’s 3 off a screen by the 7-foot-2 Chukwu boosted the lead to six with 14:00 left.

Reed was the lone bright spot for the Tigers early. He drained three 3-pointers to keep them close, his third moving Clemson within 39-36 at 12:17. A three-point play and putback by Thomas and Reed’s floater in the lane tied the game at 43 with just over 9 minutes left.

Syracuse retired the jersey of former star Lawrence Moten at halftime. Moten still holds the school scoring record of 2,334 points, set from 1991-95, which also is the Big East record.

The Tigers led 25-22 at the break despite shooting 35 percent and hitting just 1 of 8 from beyond the arc. The Orange shot 8 of 26 (30.8 percent). Freshman Marek Dolezaj led Syracuse with seven points and leading scorer Battle had only three on 1-of-6 shooting.

Clemson: Clemson entered the game tied for third in the ACC standings and is assured of a berth in the NCAA Tournament no matter how they fare in the conference tourney next week.

Syracuse: The Orange likely still need a strong showing in the ACC Tournament if they hope to nab an at-large berth in the NCAA Tournament. They’re 0-3 in the conference postseason since joining the ACC five years ago.

Syracuse: Begins play in the ACC Tournament against Wake Forest on Tuesday. The teams split two games during the season, each winning at home.

N.C. State pulls away in second half to top…