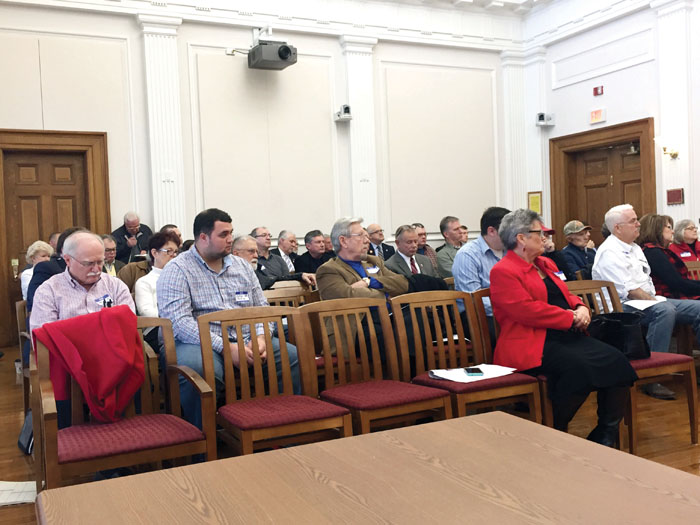 Over 50 gathered on Saturday for the Rowan County Republican Convention, held at the County administration building. Nearly 20 candidates would speak during the event. Photo by Andie Foley, Salisbury Post.

After a brief meeting among precincts, the group took pause to address new and old business before the main event: a series of speeches by Rowan County candidates for 2018.

Nearly twenty would speak or be spoken for, from the unopposed candidates Brandy Cook and Kevin Auten to judicial candidates Barbara Jackson and Andrew Health.

Many would take the time to celebrate party- and statewide successes. Others would offer more pointed criticisms for current seat holders.

McDowell encouraged voters to turn out this year, saying that Budd was facing a fierce challenger with powerful backing.

“This fall, Nancy Pelosi would love to replace the congressman with a … liberal clone of herself in Kathy Manning,” he said McDowell. “We simply can’t let that happen. We can’t take anything for granted. We’re going to need your help this fall to send Pelosi a message that her values are not the values of this district.”

Constangy celebrated House successes for the prior year, and said that Hudson’s vote on the Tax Cuts and Jobs Act had led to tangible changes in the paychecks of 90 percent of working citizens.

“From what we’ve seen from the Tax Cuts and Jobs Act, this is just the beginning,” said Constangy. “We’ve seen over $3 billion go into over 3 million working Americans from over 300 businesses and that number is continuing to grow.”

Ford said he had been working in the N.C. House to cut taxes and end restrictive red tape for businesses. He said the North Carolina General Assembly is constantly working to improve the lives of North Carolinians, but that this often happens in way that go unseen or undiscussed.

He said he’d worked to get properties de-annexed in ways that benefitted both land owners and communities. He also said he’d been championing for improved transportation in the county, working on a transportation committee to accelerate construction projects in the southern end of the county. Now, he said, these projects have an expected completion by the end of 2018, rather than 2024.

Warren celebrated financial successes in the North Carolina legislature since 2011. In that time, he said the state has increased its $245 million rainy day fund to $2 billion.

“We will never borrow money from the federal government again,” he said. “Those are the kind of reforms that we need to carry on with.”

“I’m like Donald Trump except without the money,” Pittman said as he began his speech. “Sometimes I put my foot in my mouth but I want you to look at my record in Raleigh.”

This record, he said, involved his consistently high ranking with the American Conservative Union and his history of legislation for the “average citizen.”

“My whole reason for being in office is to look out for the rights of the average citizen who often gets overlooked in favor of special interests by Raleigh,” he said.

During his talk, Edds reflected on his experience taking over a StateFarm Insurance Agency, speaking on the lessons that he’d brought with him in his role as county commissioner.

“Really great salespeople have systems. They have frameworks and they have processes in place in order to consistently produce,” he said. “These … are folks who lead organizations.”

He said when he was elected three years ago, he realized the Board of Commissioners was lacking this framework, and that he’d been working to bring a process of continued improvement to Rowan County since.

Greene said the board had accomplished a lot of great things over the past three years. It had grown the county’s tax base, increased its credit rating, started work on industrial speculative buildings and more.

And the board isn’t stopping yet, he said, as projects for extended growth and development continue. One such project, he said, was the extension of water and sewer service to southern Rowan County.

Julian, a native to Rowan County and father of two, said that Rowan County needed positive leadership in order for it to progress and grow.

He said he would like to see West End Plaza utilized to its fullest extent and as it was originally intended.

“We need to have a combination of private businesses in there and governmental services,” he said “That was exactly what it was purchased for ….”

Julian also said the expansion of water and sewer service throughout the county was a financial necessity.

Klusman celebrated an increase in public-private partnerships in the county throughout the last three years, citing the Economic Development Commission’s continued efforts to recruit businesses to the area.

“The positive, positive growth and progress that we have made in this county I think have been tremendous,” said Klusman. “I hear that everyday as I talk to people around this county.”

Pierce said he’d made a commitment to do everything he could to foster the party’s growth and strength — something he said he’d done on the Board of Commissioners as well.

But he said it hadn’t always been easy.

“It’s been a difficult last three years because I don’t have the same philosophy as part of my board does,” he said. “But I haven’t let that stop me from improving this county.”

Pierce said his focus on extending water and sewer service to the southern end of the county had never waivered. Now, he said the process had come to a “critical mass point.”

Sides said his decision to run once more for the Board of Commissioners came after six months of personal prayer.

“I believe in less government, less taxes, and less control,” he said. “I’m like Ronald Reagan: I don’t believe government is the answer to our problem. I believe the government is part of problem.”

Sides said he would campaign for things like property rights and tax rate reductions and make sure county tax revenues were spent only on “necessary, required services.”

These services did not include rebranding, marketing or road signage, he said.

Allen said he was a big proponent of parent choice. He cited Mt. Ulla Elementary School, calling it one of highest performing schools. Yet it had 200 open seats, he said.

“There’s no reason for us to have a lot of high performing schools with empty seats in them,” he said. Parents deserved the right to make individual choices for their children, he said.

“Money’s not the answer for a better education,” he said. “It’s what we do with what we have.”

As the meeting drew to a close, party Chairman Don Vick took time to congratulate the party on its work during the 2016 election. It was a tough election, and a very tough battle, he said.

He said he thought that the presidential race had been lost early election night, only to wake up to a surprise.

He said that the election was an example of how important it was that Republican voters continue to turn out during elections.

“What an amazing thing that the people of this country got out and did,” he said. “Now we’ve got the same thing that we need to do for our state.”