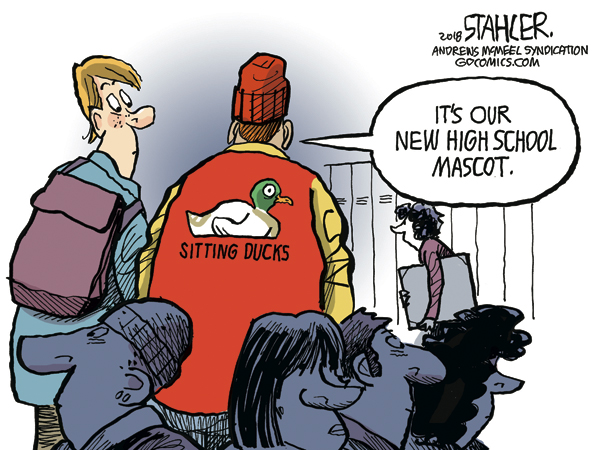 It doesn’t take much rational thinking to realize, first, these killers are deranged and not in touch with rational thinking or reality. Second, they will always pick “soft” targets to attack, places where no one is likely to be carrying guns. I believe some of these shooter-killers do not want to die, others just don’t care and some hope to die. These people are mentally ill. They believe notoriety will make them famous, and people be talking about their great deeds.

The first thing to happen when guns are involved in these senseless killings is the vocal finger pointing at the president, politicians and the NRA with great cries of “gun violence.” When people are killed in automobile accidents do we hear cries of “automobile violence”? Have you read about SUV violence that jumped the curb, ran down a hill, injuring or perhaps killing its passengers? When airplanes crash do we talk about airplane violence? There are accounts of lawn mowers or farm tractors rolling over and killing the riders. Do we hear about lawn and farm tractor violence? Well, why not? People died.

This idea of gun violence is being perpetuated by the talking heads on television that seem to like the “gun violence” phrase. There is no such thing as gun violence, automobile violence, SUV violence, airplane violence, lawn mower or farm tractor violence.

What we have is irrational thinking that someone or something other than the shooter is responsible for the violence. The real problem is that we are not protected from those that would kill us if they can. They have no regard for their country or the people and seem to focus only on themselves to satisfy some imagined insult or personal harm to themselves and somehow killing others will make things right.

New gun laws are not the answer. Clinical treatment for people not in touch with reality is tough to institute since the line between rational and irrational thinking is so thin it is sometimes hard to say this person is crazy when maybe it’s just different way of thinking. We do not like to be wrong and accuse someone being dangerous when they just think differently and not a real danger to society.

Air ports, hospitals, county and city buildings and major athletic events all have police on site to stop any would-be killers, but schools are largely completely unprotected from these deranged shooter/killers.

Irrational thinking about guns by people so opposed to any presence of firearms at schools has led to our present dilemma. Not every teacher has to carry a gun just those willing to be trained and to be proficient in its use and maintenance. This idea would not be bad for churches to have someone in the congregation to be armed as these too are ideal targets.

I grew up during the Great Depression and cannot remember any of this happening in the ’30s, ’40s and  ’50s. What has happened to change America in this way? I don’t pretend to know but I do not believe politics or politicians have the answer. We must decide locally what to do — and soon before the loss of more young innocent lives.

Shooter/killers must be met with an equal and determined force to stop them.