Larry Efird: Guns and teachers — what do kids think? 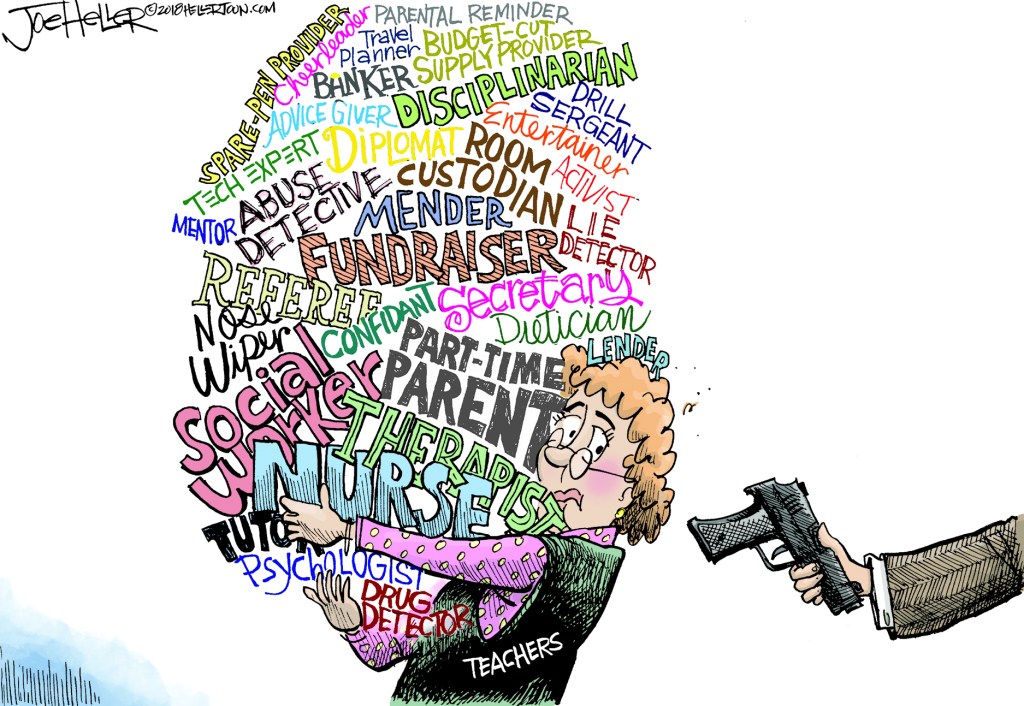 Today at school, I thought I’d ask my homeroom what they thought about the recent proposal to arm teachers with guns in the classroom. Over the years I’ve found that teenagers usually have an opinion about almost everything. And sometimes they have wisdom to along with it.

As a result of the recent tragedy in Florida, there is no shortage of opinions among teenagers — or adults — when the topic of “guns” comes up. This is one time I’d rather listen to teenagers, however. After all, they are the ones who have been the most affected.

First of all, I asked them if anyone had something positive to say about arming teachers with guns. There were a few students who said they’d feel safer knowing that some faculty members could use guns, but of course, they would only want teachers who had first undergone extensive, professional training with firearms to be equipped with weapons, or someone who had served in the military.

They definitely did not want every teacher to have a gun in his or her classroom — especially ones “who were on medication” or had “unstable” personalities. (That response brought a little comic relief into an otherwise heavy conversation). The main reason they had for thinking teachers armed with guns would be a possible benefit was so that a potential assailant might be discouraged from entering the building knowing that multiple, undercover adults could take them down. But they also wisely realized the potential chaos and confusion of properly identifying the real killer if numerous people were wielding rifles.

A second group of kids, which outnumbered the other group at least 4-1, were equally passionate about their opinion, saying that they did not think teachers should have to be burdened with that responsibility considering that most teachers would not want to have a firearm in their classrooms, coupled with the fact that a teacher’s primary job is to teach people, not to shoot them.

I was impressed by how respectful both groups of students were in expressing their opinions openly with one another. I had told them beforehand that they needed to listen to each other, and hear each other out, even if they did not agree. We were not having a formal debate; we were simply expressing our honest opinions in an impromptu setting.

One thing is for sure: students are thinking about how life has suddenly changed for them in our country. No more do they go to school each day with the biggest thing on their minds being the ball game that afternoon or the test that morning. Sadly, many students wonder if their school will be the next one to make the national news.

One of the biggest problems in solving this dilemma is that our elected officials do not seem to understand the entirety of the role teachers play in the typical American school. The leaders who are supposed to help us solve our problems can’t seem to comprehend that teachers are the ones on the front lines already, and simply putting more guns in our hands isn’t going to make us or those entrusted to our care feel any better. It actually will have the opposite effect. But has anyone asked us what we think? Has anyone asked our kids?

It’s been said many times, “Guns don’t kill people; people do.” Is that even a valid statement? Or is it an excuse for corporations to justify selling more guns? Even teenagers see the faulty logic in that overused slogan.

Thankfully, several major sporting good chains have made stricter policies regarding the sale of guns to the general public. They do appear to be listening to the voices of young America. We can only hope this trend will continue.

As a teacher, I have learned to value the opinion of my students because they will tell me the unvarnished truth. Sometimes it challenges me as an adult to stop being complacent. Listening to students has made me a better teacher because I realize I don’t know everything just because I have a teaching certificate and they don’t even have a diploma yet.

But I do know America needs to hear what our kids have to say about guns.

Byron York: Who is tougher on Russia?