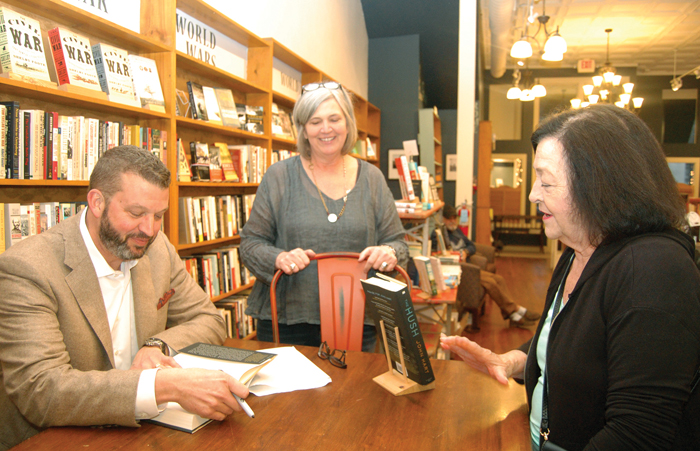 Deirdre Parker Smith/Salisbury Post John Hart, left, signs a book for Betty Meadows, who had been waiting for hours to meet him. In the middle is Wendy Beeker, owner of South Main Book Co.

John Hart was so busy signing books Thursday night that we didn’t get a chance to talk.

That’s a good problem for an author to have — so many fans lined up for their moment with him.

With Hart, there are so many friends in line that book signings in Salisbury are reunions. Some were Hart’s friends, some were friends of his family, but there were a good number of book fans, anxious for their chance to meet John Hart.

Hart is a generous author who loves hanging out with his readers. For each and every person who stopped at his signing table, he had a smile, he made polite talk, asked questions, posed for pictures. It took time, stretched out the evening, but the smiling faces proved that everyone appreciated those few moments.

Author Kristy Woodson Harvey’s mother, Beth Woodson, was there, thanking Hart for the help and encouragement he has given Harvey, whose new book, “The Secret to Southern Charm” comes out April 3.

Hart kidded around with some of his lawyer buddies from the days when he was an attorney in Salisbury.

His friend James Randolph, whose name appears in one of Hart’s books, bought maybe a dozen books and was settling in for an extended signing while they kidded each other.

One woman had been waiting at the book store since 2 p.m. Another woman drove from Hickory. A young mother brought her mother to the signing because Salisbury was closer than Raleigh, where Hart did a fundraiser with John Grisham for the N.C. Museum of Natural History.

Another reader bought four of Hart’s six books, to catch up.

For most of the people in the line that snaked around the book shelves in the store, “The Hush” is so new they haven’t even heard much about it. They are going to be surprised.

A steady crowd talked and waited patiently, clutching their books. Old friends ran into each other, and strangers became friends.

Hart had to be in Pawley’s Island, S.C., for a luncheon Friday, then he’ll be all over North Carolina, his adopted hometown of Charlottesville, Va., Florida, Missouri, Texas, Arizona, Colorado, New York, back to Texas, then back to South Carolina. Today, he’ll be in High Point.

The new book is all Hart, but the author will take readers to a totally new landscape and mindset, using Johnny Merrimon, the brave but damaged boy from “The Last Child.” Johnny is a young man now, haunted by his own demons and drawn into a supernatural world that is part of the land he loves.

Hart is already working on his next novel, much to the relief of his fans, who waited for two whole years for “The Hush” after and intense drama of “Redemption Road.”