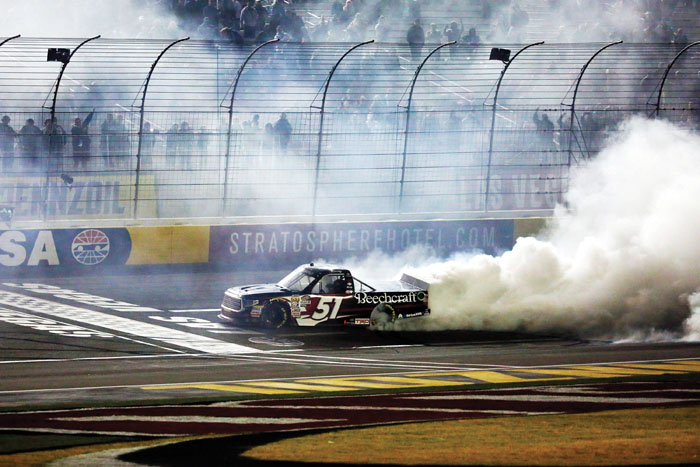 LAS VEGAS (AP) — NASCAR’s annual early-season trip to Las Vegas Motor Speedway is an understandable favorite for many teams and drivers. This year’s event, however, is about getting much more than a few hands of blackjack and the checkered flag.

For the first time, everybody is coming back to Vegas in six months for the opening race of the playoffs.

Each turn in Sunday’s Monster Energy Cup Series race should provide experience and data to the drivers hoping to dominate the postseason this fall.

“There is definitely some added importance to this race with (Las Vegas) being in the playoffs,” said Kyle Larson, who excelled in practice this week at the track where he finished second to eventual Cup champion Martin Truex Jr. last year.

“Hopefully we have a strong race, and if not, you know what you need to go back and work on to be better when you come back later in the year to benefit your playoff run,” Larson added. “Not that this race when it was just a stand-alone event wasn’t important, but anytime you can race at a track that you are going to come back at in the final 10, it’s got some added importance to it.”

While other tracks have downsized their NASCAR ambitions when faced with smaller crowds in recent years, Las Vegas has been eager to host a second race for several years, confident in its local fan base and the visiting fans who plan a vacation weekend around the March race.

The track finally got a second date last year when New Hampshire’s second race was given to Vegas, which was backed by sponsorship deals with the local Convention and Visitors Authority and with the South Point hotel-casino, owned by former race team owner Michael Gaughan.

Everybody already knows this track from NASCAR’s annual visits, but teams are paying particularly close attention this week.

“This race has more importance around it than it ever has before, just because of the playoff atmosphere that will be around it in September,” said Kurt Busch, who was born in this city. “This is big for Las Vegas.”

The winter weather in Las Vegas isn’t necessarily helping the teams to prepare for September, when temperatures are almost certain to be sizzling. The speedway has been chilly this week, with occasional 40 mph winds buffeting cars and possibly changing drivers’ tactics.

“It’s definitely an important weekend to make sure you have a firm understanding of this track and what you’re going to need when you come back for the playoffs,” said Kevin Harvick, who won last week in Atlanta.

ON THE POLE: Ryan Blaney earned his third career pole Friday, and his Team Penske Ford will start alongside Harvick on the front row.

Blaney has been impressive already this season, nearly winning at Daytona.

after leading 118 laps before late-race contact with Kurt Busch forced him to pit for repairs. Penske’s rising star gets another chance to earn his second career Cup victory in Vegas.

JJ’S GAMBLE: Jimmie Johnson is the most successful active driver in Las Vegas, winning four times and recording nine top-10 finishes. Yet he hasn’t won on this track since 2010, and the seven-time Cup champion arrives on the longest winless skid of his career at 25 straight races. Johnson intends to get his season back on track on his native West Coast.

BUSCH BROTHERS: Kyle and Kurt Busch grew up in Las Vegas, but the Durango High School grads have only one combined Cup victory on the track that was built during their youth. Kyle Busch won the Cup race in 2009, but he also has victories there in the Xfinity Series and the Truck Series race, which he won Friday night. The 39-year-old Kurt Busch, who will start third after an impressive qualifying run, makes no secret of his desire to raise the trophy in the desert before he retires.

FORD TOUGH: Fords earned the first three spots in qualifying, along with five of the first eight, and eight of the first 12. Fords also excelled last week in Atlanta, but the drivers and teams aren’t prepared to say they’ve got all the answers yet.

IN THE WIND: The drivers could get a respite from the high desert winds Sunday, but they’re prepared for anything after being forced to steer through gales in practice. “It’s just like anything else, just the same for everybody,” Clint Bowyer said. “You get in the car and you’re worried about what it’s going to do. I guess it affects the balance of the car, where you pick up the headwind or where you lose it. You feel it as you change direction.”