Dr. Michael Bitzer: Generational partisanship, or why Millennials may not save us from polarization 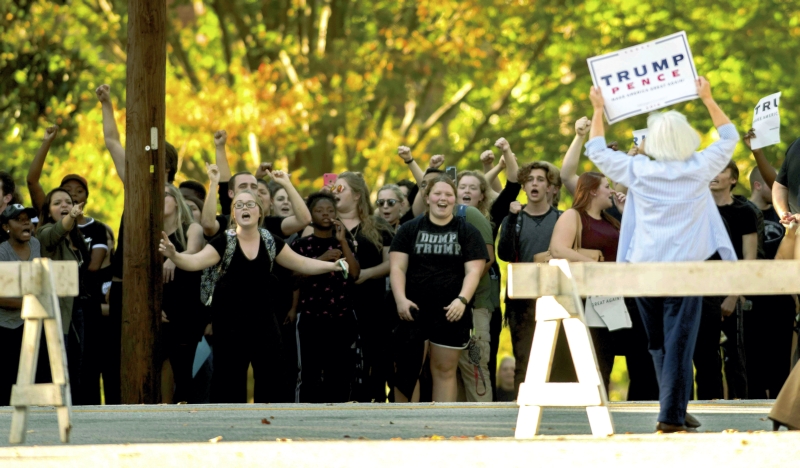 I’ve become very interested in the generational dynamics underway in American politics, and particularly in North Carolina. But voter registration only tells part of the story—a companion aspect to our political environment is voting “behavior,” especially about voters’ party self-identification and supporting presidential candidates, when it can be a driving force of our partisanship and polarization.

In trying to better understand the partisanship and potential polarization coming from party identification in our nation, along with the generational dynamics that are happening (especially with the rising Millennial generation), I ran a series of analyses using survey data from the American National Elections Studies (ANES) to investigate the following questions:

• Are Americans really moving into political independence with the “rise of the independent” or are we seeing another phenomenon, especially when it comes to voting behavior of these independents?

• What have been the trends in recent presidential elections when it comes to partisan self-identification and presidential vote choices among the four generations in the American electorate?

First, some definitions of terms being used, starting with generational cohorts. In defining the four key generation cohorts in this piece, I used the corresponding birth years (and thus, the ages in each election year) to define members of the following generations:

Greatest/Silent Generation: those born before 1945

In order to capture the generational analyses, I recoded the ANES survey respondents, based on their stated age in the year of the election, into one of these four generational cohorts. As Millennials were just coming of “political age” to participate in national elections in 2004, I use that year’s ANES data and the subsequent presidential election years, focusing heavily on the three most recent elections.

Within the ANES surveys, a battery of questions are asked of respondents before the November general election and immediately after the election.

One of the pre-election questions posed is “Does the respondent think of self as a Democrat, a Republican, an Independent or what?” This simple question captured an interesting phenomenon among the generational cohorts, especially the entering Millennial generation.

• Generation X plurality goes back-and-forth among self-identified Democrats and independents since 2004, with Republicans making up 20 to 27 percent.

• The Greatest and Silent Generation, the oldest, had Democratic self-identification holding sway in 2000 to 2008, but Republicans tied and secured the first ranking in 2012 and 2016, respectively.

The next question in the ANES sought to find out the “strength” of the respondent’s partisan self-identification: “strong” to “not very strong” among the respondents who identified as partisan, while the independents were asked if they leaned to one party over the other. This creates a seven-point party self-identification. The generation breakdowns in the recent presidential elections were:

Among Millennials in 2004, numbers of self-identified independents leaned to the Democratic Party, but over the next three elections, partisan identifiers became much more evident within the generation, with pure independents below 20 percent of the generation.

This could demonstrate that growing numbers of Millennials were beginning to find their partisan “home.”

What is interesting is that Baby Boomers and those of the Greatest generations became “balanced” in strong partisan identification within both generations, while younger voters (Millennials and Gen Xers) tend to have a more Democratic-lean towards their cohorts in the 2016 study.

Next, one of the key questions within the post-election studies is “if the respondent voted in the election, who did you vote for?”

In taking all the responses for 2008 to 2016 by party self-identification and strength, one sees a very clear pattern in presidential vote choices.

Those who are partisan, but “not very strong,” in their identification range from 75 percent to 88 percent in support of their party’s presidential nominee.

But what may be surprising to some, those who identify as “leaners” in their identification voted at slightly higher levels than their “not very strong” partisans: 78 to 89 percent voted for their party’s presidential candidate. Only those who identify as “purely” independent (with no leanings to one party over the other) tend to be more in line with a “competitive” level of presidential vote choices.

This phenomenon has been apparent in American National Election Studies for some time, but since 1992, the pattern has clearly emerged in partisan loyalty, even among independent leaners.

From 1952 to 1988, partisan loyalty, while strong at times, was much more dispersed. From 1992 to 2016, the clear strength of loyalty among strong partisans, with the second grouping of loyalty among “not very strong” and “leaning” partisans, shows a much tighter grouping.

Therefore, I regrouped all respondents into three collapsed partisan identification groups: Democrats and Republicans, to include strong, not very strong, and lean to identifiers, in addition to a separate category of “pure” independents.

What we see is a pattern of partisan loyalty to the party’s candidate that has emerged in the American electorate, and that party identification may be better defined by using partisan loyalty.

But has this partisan loyalty extended within the generations as well?

During the past three presidential elections, Millennials have shown an 80 to 98 percent level of party loyalty, with Gen Xers showing an 82 to 90 percent loyalty, Baby Boomers with an 88 to 92 percent loyalty, and the Greatest generation showing a loyalty of 86 to 96 percent.

So, if one takes the notion of party loyalty to demonstrate an example of the power of polarization — Democrats giving strong loyalty to their party’s presidential candidates, while Republicans doing the same, and only a small number of “pure” independents giving a competitive level of voting among the two parties — then the era of party loyalty and polarization is only continuing with the newest generation entering the electorate.

While some would put the great hope on the Millennial generation to bring about an independent revolt against the partisan loyalty of previous generations, this data tends to point that Millennials will be as partisan, and seemingly as polarized, as other generations.

What seems to be evident with Millennials, and with Generation X to some degree, is that Democrats may see greater numbers and loyalty among these voters than Baby Boomers and the Greatest generation.

In the future, I’ll examine the notion of polarization through various policy issues, again through the lenses of partisanship and generations.

Dr. Michael Bitzer is director of the Center for Engaged Learning and Teaching at Catawba College. This article is from his blog, Old North State Politics. Read more at http://www.oldnorthstatepolitics.com/