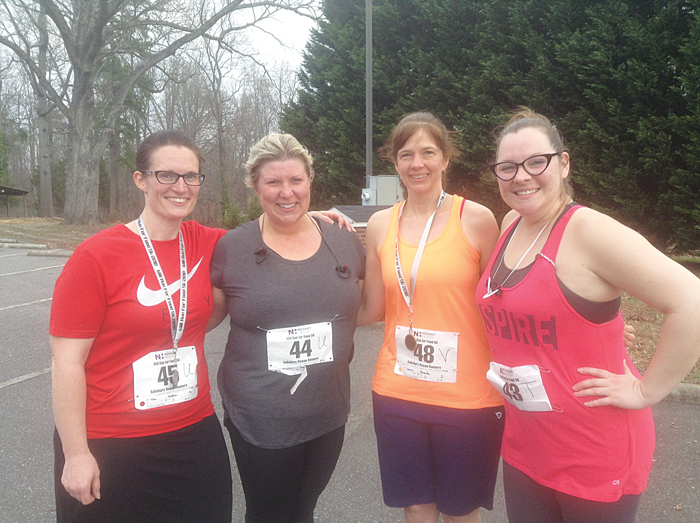 L to R Heather Fox, Tabitha Myers, Amanda Lewis, and Christy Baker after the Will Run for Food 5K on February 24th. Photo by David Freeze.

The Beginning Runners Program, a partnership between the Salisbury Rowan Runners, Novant Health and Salisbury Parks and Recreation produced six new graduates on Saturday, Feb. 24 at the Will Run for Food 5K at Centenary Church.
The program is in its 12th year and now has three sessions per year. These ladies graduated the winter session.
I thought it might be fun for readers to meet them and see why they joined the class and what they took home from it. Registrants don’t have to be brand new runners but most are. The class is open to men, women and teens if at least one parent is also attending. Few men attend and less than half hang around to finish. Not surprising that this graduating group started out with seven women and one man, but only six women got diplomas.
Heather Fox came to Salisbury from Indiana and wanted to get back into running. She wanted to find a group that would help her do that. She credits the class for teaching her how to solve ordinary issues, avoid injuries and stay motivated.
My neighbor Amanda Lewis signed up when I kept asking her about joining. Her son had graduated the class several years ago and Amanda had already been running some but got out of the habit. She said, “The BRC provided a training schedule and the educational tools and motivation I needed to get back to running. Definitely the encouragement and the camaraderie of everyone in the group helps.”
Fox and Lewis were returning runners but more than 80 percent of a usual class is made up of true beginners or those who might have tried on their own and not been successful. Such was the case with Tabitha Myers, Lyndsay Kluttz, Christy Baker and Lorrie Allen.
Myers said, “The running class exceeded any expectations that I had. You truly feel a sense of being a part of a group and there was so much encouragement/motivation by the more experienced runners. The best thing was all of the new people I met and hearing their journey of how they became runners. “
Allen added, “I wanted to learn to run the correct way and it is great exercise.” Kluttz agreed, “The class was just what I hoped and getting tips and encouragement from others made it work.” Baker said, “I loved that it was not a pushy class and we got to go at our own pace. I met new and encouraging people and did something that I wouldn’t have done on my own.
When the class was done and their graduation 5K at Centenary Methodist was completed, Lewis added, “Yes, all of the class members who were at the 5K Saturday said that we will come to the BRC again in March.” It is a great way to stay motivated and there is no fee once you have graduated a previous class.
Here are the basics of the program. We will meet at Novant Health, starting on Tuesday, March 13 at 6 p.m. Enter at the fountains and go to the information desk. The lobby meeting room is just behind the desk. Each session will have 30 minutes of class instruction on such topics as shoes and equipment, nutrition, stretching and strengthening, running form and injury prevention. Then, we hit the streets for a beginning distance of a half mile and we will gradually build up to 3.1miles over 8 weeks.
Cost is $65, which includes the class, a training shirt, membership in SRR for a year and entry into the Bare Bones 5K. You’ll get all the encouragement and tips described above. Each person gets a training schedule that requires running four days a week.
To sign up for the class, contact Steve Clark at sclar@salisburync.gov or 704-202-6601.
The next race in Rowan County is the Mt. Hope Church 5K at Salisbury Community Park on Saturday, March 31. Look for more information about the class and other running events at www.salisburyrowanrunners.org