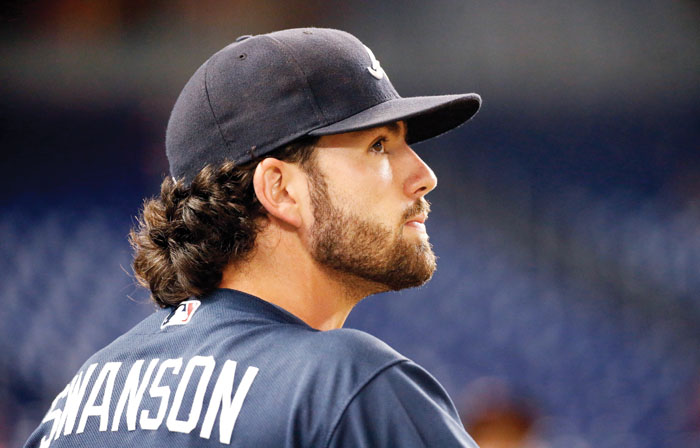 FILE - In this Sept. 28, 2017, file photo, Atlanta Braves' Dansby Swanson looks out from the dugout before the start of a baseball game against the Miami Marlins in Miami. Teammates Dansby Swanson and Sean Newcomb are hoping to rebound from rocky seasons. (AP Photo/Wilfredo Lee, File)

KISSIMMEE, Fla. (AP) — Dansby Swanson and Sean Newcomb are hoping to rebound from rocky seasons with the Atlanta Braves.

“It’s almost silly to think about it like this, but this is a game of failure,” said Swanson, who had a 144-game audition as the Braves shortstop in 2017.

“What happened last year, we’re going to build off of it and be better now. I’ve already reflected and I’m ready to move on.”

Newcomb, a left-handed pitcher, came up in June and showed he could strike out major league hitters (108 in 100 innings) without giving up too many home runs (10). However, his 57 walks were a contributing factor to his 4-9 record and 4.32 ERA.

In the major league camp for the first time as a member of Atlanta’s rotation, Newcomb’s spring plan is “just getting more comfortable, being able to trust my stuff in the zone and let it rip, not try to strike everyone out.” He said cutting down on the walks is “an over-time kind of thing in my development.”

Swanson and Newcomb are at the developmental core of what the Braves are trying to do to improve. Both are 24. Both were drafted in the first round by other teams and came to the Braves as prospects in trades.

They both had mixed results in their first full seasons (Swanson played in 38 games in 2016), but they will be expected to do more this season.

“We don’t feel like any of those guys are finished products yet,” manager Brian Snitker said. “Dansby was coming in after the really good end of the season before, and … this is a tough league.

“You just don’t come in and conquer it. There’s been a lot of Hall of Famers that had rough goes at the beginning. You’re going to have setbacks in this game; it’s going to beat you over the head probably more times than not. And you have to learn from it and survive it.”

Swanson, the No. 1 overall pick by the Arizona Diamondbacks in the 2015 draft, was sent to Triple-A in July after struggling.

“Obviously that’s not how you planned for it to go, but there’s always a bigger plan to trust,” he said. “I was willing to take that in stride and be better from it. I don’t think I ever truly lost confidence in myself. It was just more of like re-evaluating, like finding it again.”

Swanson, who came to the Braves along with Ender Inciarte and Aaron Blair in the trade for Shelby Miller in December 2015, hit .213 before his 11-game demotion and .268 when he came back.

He said the daily grind was an experience that required adjustments.

“The most I ever played in college was 72 games in a year,” he said, “and now it’s 162, you play every day. Physically it’s tough, but mentally it can be tough too, if you let it.”

Newcomb, the 15th overall pick by the Los Angeles Angels in 2014, came to the Braves a month before Swanson in the Andrelton Simmons trade. He has been in the Braves’ rotation since his major league debut on June 10 last year. However his spot for 2018 is not secure yet like those of Julio Teheran, Mike Foltynewicz and Brandon McCarthy.

“I look at it like that was my spot last year. Coming into this spring it’s my spot to lose actually, so if someone’s trying to take it from me, I’ve just got to go out there and do what I’ve got to do,” Newcomb said.

With veterans R.A. Dickey, Bartolo Colon and Jaime Garcia in the rotation last spring, it was understood that Newcomb would start in Triple-A.

“This rotation is definitely different, and it keeps the intensity level up,” he said. “As far as the day-to-day stuff, I feel pretty good about it. I feel comfortable being around most of these guys. It makes the adjustments to spring training easier.”

Newcomb has three weeks to work on getting the walks down while increasing his strikeouts.

“He’s getting to know himself better. A lot of it is confidence,” Snitker said. “They want to get strike one, and when you don’t go strike one, then they start trying to throw strikes and it becomes counterproductive. He’s not the finished product, but he’s far better today than he was a year ago today, put it that way.”