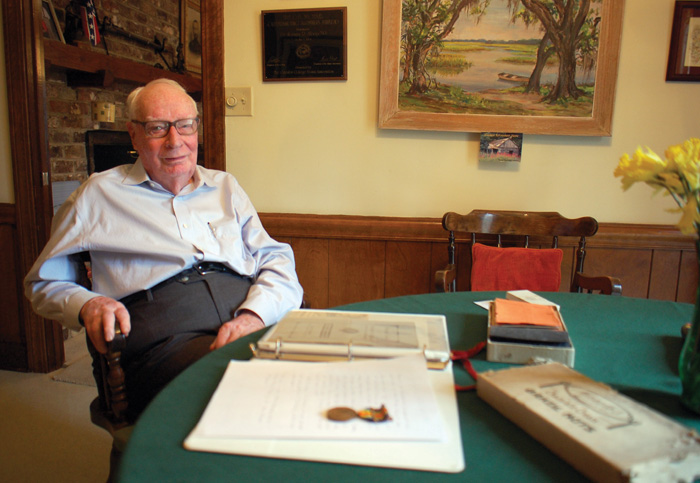 Mark Wineka/Salisbury Post Dr. Norman Sloop sits at his dining room table with some of the documents, pictures and keepsakes related to the life of an uncle he never knew, W. Carl Bradshaw, who died of spinal meningitis in World War I.

Not far from the mountainous monument to E.B.C. Hambley, the Bradshaw plot includes the markers for two of Sloop’s uncles, Carl and Sam Bradshaw, and a larger stone for his grandparents, Eula and D.C. Bradshaw.

But it’s the life — and death — of William Carl Bradshaw, who everybody knew as Carl, that has always intrigued Sloop. He never knew this uncle, but back at his home off Statesville Boulevard, Sloop serves as archivist of sorts for the memory of Carl, who died in France during World War I.

There was a certain number — “29” — that seems entwined with Carl Bradshaw and the war that killed him. Consider this:

• After his death, Bradshaw was interred in a U.S. military cemetery at Camp du Valdahon in Doubs, France, but three years later, his remains were brought back to be reburied at Chestnut Hill. The date of that interment — May 29, 1921, an anniversary date of his enlistment.

So “29” has been a hard number for Sloop to ignore.

Sloop has an ancient Nunnally’s candy box full of documents related to Carl Bradshaw’s military service and death. It includes a World War I victory medal, indicating he served in France, and Carl’s wallet, which holds two French coins.

Sloop compiled a small notebook of much more personal information, including Carl’s last letter home to his mother Aug. 21, 1918, just eight days before he died from spinal meningitis.

At the time of its writing, Carl wasn’t even sick.

“A rapid demise,” says Sloop, who still has the handkerchief in which his grandmother Eula had wrapped that letter.

The notebook also contains photographs of Carl in his uniform and his flag-draped coffin in 1921. Sloop has the Western Union telegram Eula received from the Army notifying her of Carl’s death. In addition, there are letters from Carl’s commanding officer, Capt. David Etheridge, and Army Chaplain Edward Currie.

“I was very fond of your son,” Etheridge wrote to Eula Bradshaw, “and he was an excellent soldier, obedient, willing, cheerful and loyal at all times.”

Etheridge tried to offer words that might comfort the mother: “Everything was done that was possible to save him,” he wrote. “He was cheerful during his sickness and, Madam, he died a Christian having no fear of death.”

Pressed between the clear plastic sheets of Sloop’s notebook are newspaper clippings about Bradshaw’s reburial back in Salisbury in 1921. The Greensboro Daily News said, “The burial of Carl Bradshaw in Chestnut Hill Cemetery was probably attended by the largest number of people that has ever attended a burial in Salisbury.

“He was a popular young man of the city and besides that, the unusual service conducted by the American Legion post drew hundreds of people to the cemetery.”

Sloop always thought it was cruel what people supposedly told his grandmother as a way of trying to console her after Carl Bradshaw’s death.

“Just think,” they said, “you have four other sons.”

But Eula Bradshaw would answer, “But I had only one Carl.”

Sloop understands why his grandmother wanted her son’s remains back in Salisbury.

The Bradshaw funeral procession from the house toward Chestnut Hill was joined at Military Avenue by Legionnaires of the city, who had been honoring all of the county’s war dead at the National Cemetery.

A band played the funeral march as the procession proceeded. Carl Bradshaw was buried with full military rites at Chestnut Hill. His father, D.C., had died in 1907 and was already interred there.

It so happened that Sloop’s father, Ray, was a pallbearer that day along with Max Barker, J.H. McKenzie, Charles Shaver, Lee Atwell and J.A. Dunn.

Norman Sloop still has the folded U.S. flag presented to Eula Bradshaw during that ceremony.

William Carl Bradshaw was 27 when he died. He had been born Dec. 19, 1890, in Rowan County’s Millbridge community. He was the fourth of D.C. and Eula’s eight children.

One of Carl’s sisters was Effie Bradshaw, Norman’s mother, who married Ray Sloop in 1924.

The Bradshaw family moved from Millbridge to Salisbury around 1898. Carl Bradshaw joined First Presbyterian Church in 1907, and before entering the U.S. Army, he worked at the Southern Railroad’s transfer sheds in Spencer.

In France, Carl Bradshaw served in the 306th Trench Mortar Battery. with the 81st Division. He never had time to rise above the rank of private.

Even though Ray Sloop, Norman’s father, had enlisted on the same date as Carl Bradshaw, the men did not know each other. Ray Sloop came to Salisbury in 1919 from China Grove, and it was his courting of Effie that led to his being asked to be a pallbearer at Carl’s service in 1921.

Currie, the Army chaplain who wrote to Eula Bradshaw, encouraged her to find comfort in the 14th chapter of John and in the 91st Psalm. Currie said she should remember “he died while in the service of his country, in a noble cause, for right and justice.”

Currie said he had visited Carl several times during his sickness and had prayed with him.

“He seemed to find great comfort in prayer and was happy and cheerful to the very last,” Currie said. “It can truly be said that he was a Christian soldier.”

Carl Bradshaw died at Camp Hospital No. 12, and in the U.S. military cemetery in Doubs, France. The number of his marker was “25,” not 29, surprisingly.

“A sod of pretty green grass covers his grave,” Currie wrote to Eula, “and a beautiful white cross marks the place.”

Etheridge, Carl’s commanding officer, promised he would try to send a photograph of the military cemetery in France and, if possible, a diagram showing where Carl was buried.

“I personally put in the coffin his identification tag with his name and serial number on it,” Etheridge said. “I also secured an officer’s casket for him.”

In his final letter home, Carl Bradshaw expressed the normal homesickness of many soldiers, and he wasn’t yet a big fan of France. “I am not crazy at all about this place,” he told his mother, “and I don’t like the people at all.

“I don’t like the way they talk, and I can’t figure out this money.”

Carl’s letter was lengthy, written on the stationery of the 306th Trench Mortar Battery, He said he was sitting on the ground, writing on his knee, and he touched on a wide range of subjects, asking many questions along the way.

How was work for Ned and Sam?

How was Sis’ baby boy doing, and could she send a picture of him once he was older?

What did Ned ever do about Carl’s car — sell it or fix it?

Did his mother ever get rid of the old Ford?

Did the railroad ever send her any money for the back time he was owed. Had “Uncle Sam” forwarded any of his pay to her? Did she receive any of his insurance papers?

Carl said he hadn’t heard one word from home since his arrival in France, but he told his mother not to worry. “I guess we will get along all right,” he said.

“I think that God will take care of me and bring me safely back to you all.”

Carl Bradshaw was right, of course. He made it back home.

The soldier signed off the letter to his beloved mother this way: “With oceans and oceans of love, hugs and kisses for all, I am your son, William Carl Bradshaw.”

It should be mentioned that Eula Bradshaw died in 1929.