Sharma soars into the lead in Mexico City 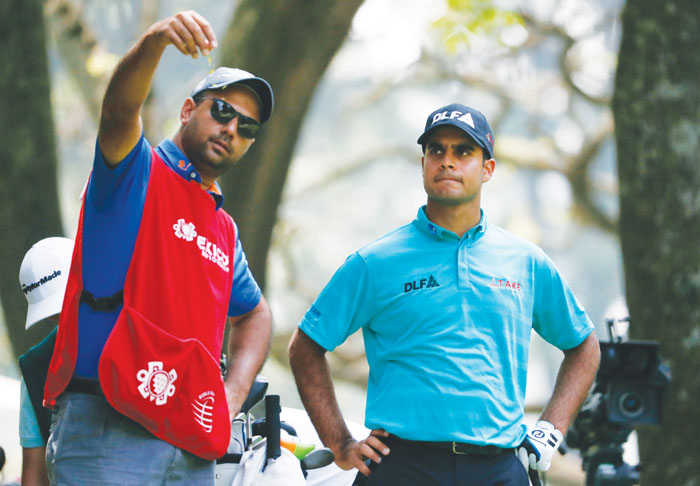 India's Shubhankar Sharma, right, talks with his caddie about his approach to the green on the 7th hole during the second round of the Mexico Championship at the Chapultepec Golf Club in Mexico City, Friday, March 2, 2018. (AP Photo/Eduardo Verdugo)

By DOUG FERGUSON, AP Golf Writer
MEXICO CITY (AP) — Success has come quickly for Shubhankar Sharma, and the Mexico Championship is no exception.
Sharma hit a 3-wood that landed on the green and settled 2 feet away for an eagle on the opening hole at Chapultepec Golf Club. He finished with three straight birdies for a 5-under 66. And in his first World Golf Championship, he takes a two-shot lead into the weekend.
“I worked all my life to come and play at a high stage like this,” said Sharma, who turned pro when he was 16. “You have to expect great things from yourself if you want to play at a high stage. I just try and not think of anything before I start. I just try and concentrate on the success, and just let things go.”
Sharma overcame a pair of three-putt bogeys early in his round and was at 11-under 131.
Masters champion Sergio Garcia had a 65 and was two shots behind, along with Xander Schauffele (66) and Rafa Cabrera Bello (67).
Sharma’s greatest asset is stable mind, and he has not shown any moments of being overwhelmed.
Even so, there has been a few surreal moments, such as warming up the range before the second round.
Jordan Spieth, the British Open champion and former No. 1 in the world, was hitting balls behind him. And then when Spieth left, world No. 1 Dustin Johnson took his place. It was hard for Sharma not to glance at over his shoulder.
“I couldn’t ask for anything better,” he said.
And then it got better.
Sharma had such control over his game that he putted for birdie on every hole except the par-4 eighth, where he escaped from the trees into a bunker, blasted out to 12 feet and saved par. He shot 31 on the back, finishing with a gap wedge he hammered to 10 feet for a final birdie, and he walked off the green to a big ovation.
Russell Knox is the only other player to win a World Golf Championship in his debut, at the 2015 HSBC Champions in Shanghai.
So much more is at stake.
Sharma, the only two-time winner on the European Tour this season who leads the Race to Dubai, is No. 75 in the world. Still in his sights is a chance to move into the top 64 after next week to get into the Dell Match Play in Texas, and he has an outside chance of getting into the Masters.
And to think that just three months ago, he had yet to win anywhere in the world. Then, he shot 61 in the second round on his way to winning the Joburg Open. Last month, he closed with a 62 to win the Malaysian Open.
Now he’s 36 holes away from a World Golf Championship.
“Everything has happened so fast for me,” Sharma said. “In the past four months, my life has totally change. Obviously, the final destination for me is the PGA Tour. That’s always been my dream. Just playing well here this week will get my closer to my dream.”
And yet he still has a long way to go.
Schauffele, a two-time winner as a rookie last year on the PGA Tour, has managed to go bogey-free at Chapultepec over two rounds, remarkable because the poa greens following a week of rain have been bouncing more than rolling, especially in the afternoon.
Hardly anyone knew much about Schauffele last year before he played well at the U.S. Open, and then won the Greenbrier Classic and Tour Championship. He at least knows a little about the rising star from India.
“He’s 21 years old, and he just won a tournament and has a locker right next to mine,” Schauffele said.
Ten players were within four shots of the lead going into the weekend, a group that includes defending champion Dustin Johnson, who holed a wedge from 112 yards for eagle on the ninth hole and shot a 66. He was in the large group at 7-under 135.
“My favorite thing about that is I didn’t have to putt,” Johnson said.
What made him smile was something he found Thursday night on YouTube, of all places. Johnson saw a video of someone analyzing his swing, and it made him realize his right arm was not in the right position. He tried in on the range with his first shot and suddenly felt everything fall into place.
“I have a lot of confidence going into the weekend,” Johnson said.
Sharma just wants to be keep in rolling. He missed the cut each of the last two weeks in Oman and Qatar, and then flew 10 time zones to Mexico City. He leaves Sunday night for New York and then to New Delhi, where he plays the Hero Indian Open on his home course.
He wasn’t surprised to be playing well. He wasn’t expecting much.
“It’s my first WGC and I was happy that I’ll play four days,” he said. “So I just wanted to have fun. And yeah, I’ve had a lot of fun.”