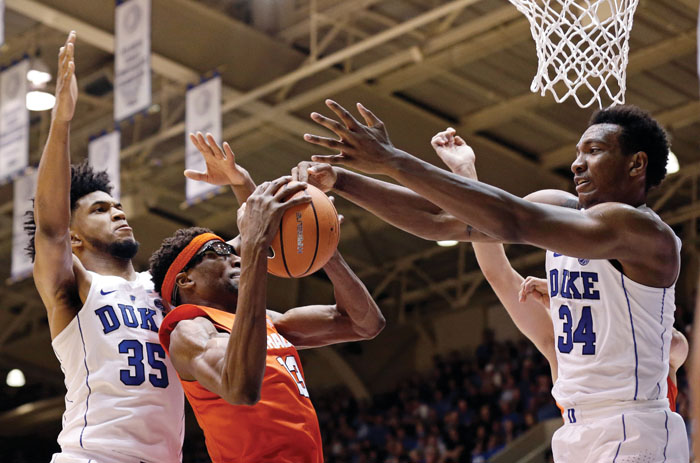 DURHAM (AP) — No. 5 Duke has found its comfort zone on defense.

The Blue Devils enter their rematch with No. 9 North Carolina on Saturday night playing arguably their best defense of the season — and that improvement has coincided with their newfound dedication to, and familiarity with, a 2-3 zone defense.

It might seem anathema to Hall of Fame coach Mike Krzyzewski, whose man-to-man defense has been as much a trademark of the program as all those floor-slapping guards.

But it’s clear that the zone suits this team — with all of its potential one-and-done freshmen and only one senior in the rotation — better than the man-to-man and all the intricacies that come with it.

“When we have guys more than one year, or the majority of them, a good crux of guys, you’re able to teach man-to-man at a level that is incredibly adaptable to the opponent you’re facing,” Krzyzewski said Friday. “We have not been able to do that with all these young guys.”

The Blue Devils make their version of the zone work with long, tall freshmen Marvin Bagley III and Wendell Carter Jr. and 6-foot-11 sophomores Marques Bolden and Javin DeLaurier in the post. Out front, guards Grayson Allen and Trevon Duval are putting pressure on the perimeter passing lanes, helping Duke force an average of 12.7 turnovers in its last six games.

“We have a team where we have a lot of bigger guys, and they’re different pieces and it fits better in what we do in zone,” Krzyzewski said.

And there’s no arguing with the results.

In the six games since, the Blue Devils (24-6, 12-5 Atlantic Coast Conference) have allowed an average of 57 points while holding four teams in a row to 57 or fewer points.

They went 5-1, and the lone loss in that stretch — a 64-63 defeat at Virginia Tech on Monday night — can hardly be blamed on the defense.

“We’ve played against a zone before, played against the best zone in the nation in Syracuse and played well against it, so it shouldn’t be that we need any more confidence,” UNC’s Theo Pinson said. “We’re ready. We’re ready to get back out there and compete.”

The move to the zone has been gradual for Duke, which used it occasionally in 2015 during its run to its fifth and most recent national championship. The Blue Devils played even more of it the following season, then dabbled with it last season.

This year, as some defensive issues emerged midway through the season, the Blue Devils effectively shelved their man-to-man defense and led Krzyzewski to label this particular group as “a zone team.”

Lately, it’s been historically good. For the first time in program history, Duke won four consecutive ACC games last month while holding their opponents to fewer than 60 points. The Blue Devils held Louisville to a season low of 56 points three nights before Syracuse matched a season low with 44 points against them.

Usually, the book on the 2-3 zone defense is to shoot over it, but they haven’t allowed that to happen, holding their last four opponents to no better than 25 percent shooting from 3-point range.

And after Duke beat Syracuse , Hall of Fame coach Jim Boeheim — maestro of the nation’s pre-eminent zone defense and one of Krzyzewski’s closest friends — quipped that “I don’t think that Coach K should really be allowed to play zone.”

The Blue Devils have even done a better job on the defensive glass lately — a noted weak spot in the zone.

North Carolina outworked Duke on the boards, grabbing 20 offensive rebounds — the most allowed by the Blue Devils all season — but since then, Duke is allowing an average of 9.1. The Blue Devils played Virginia Tech twice in that stretch and allowed the Hokies a total of eight offensive boards.

“I think it’s more just playing our game and remembering that’s what we do, and that’s how we get the other teams frustrated,” North Carolina forward Luke Maye said. “We’re just going to go out there and try to play our game, play to each individual’s strengths, and try to do what we did here last time. It’s going to be a different environment, a different challenge, and something I think we’re ready for.”

LOOKING AHEAD: The ACC Tournament begins Tuesday for the second half of its two-year stay in New York. The first day of three games features seeds 10 through 15. Four games are set for Wednesday, while the quarterfinals begin Thursday with the top four seeds. The championship is Saturday, March 10 — less than 24 hours before the NCAA Tournament field is unveiled.

PLAYER TO WATCH: Preseason Associated Press All-American Bonzie Colson is back for Notre Dame. He missed 15 games with a broken left foot before returning in Wednesday’s win against Pittsburgh , finishing with 12 points and nine rebounds in 21 minutes. Now he gets a matchup with top-ranked Virginia in Saturday’s regular-season finale. Coach Mike Brey had been open about his goal of having the Fighting Irish (18-12, 8-9) simply stay afloat and be at least within range of an NCAA Tournament bid once Colson returned; now the Irish have a couple of chances to make their case with Colson, who helped them win the Maui Invitational and reach No. 5 in the AP Top 25 in November.

INSIDE THE NUMBERS: Speaking of Pittsburgh, the Panthers (8-23, 0-18) became the seventh team to go winless through regular-season ACC play. They joined Boston College (2016) as the only teams to do it since the league moved to an 18-game schedule for the 2012-13 season. And those are the only two teams to go winless since Maryland went 0-14 in 1986-87. Pitt has now lost 22 straight ACC regular-season games dating to last season, tied with Wake Forest (1985-87) for the second longest streak in league history. Clemson owns the record of 26 regular-season ACC losses in a row, set from 1954-56.

ON THE WOMEN’S SIDE: The ACC Tournament began Wednesday in Greensboro, North Carolina, while the top seeds — No. 4 Louisville, No. 5 Notre Dame, No. 11 Florida State and No. 18 Duke — open play Friday. The semifinals are Saturday and the championship is Sunday.

Hosmer faces Royals for first time as member of…