Penn State’s Barkley is turning heads at the NFL combine 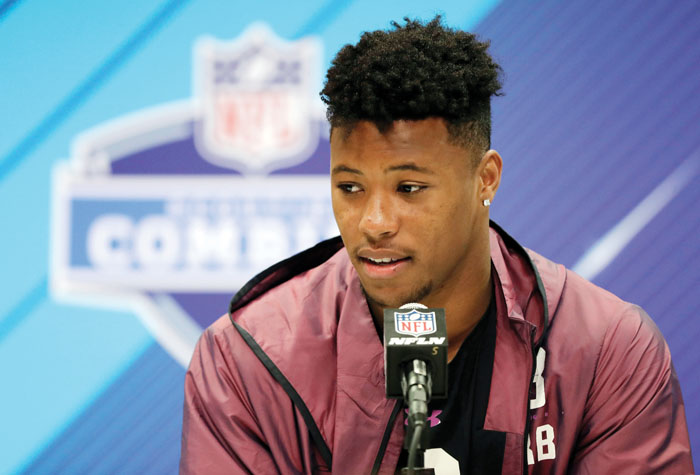 INDIANAPOLIS (AP) — The only thing that Saquon Barkley has to prove at the NFL combine this week is that he’s every bit as good as advertised.

“For a guy like Barkley who has worked so hard to develop his gifts, I mean, for him it ought to be a victory celebration. It really should,” NFL Network analyst Mike Mayock said. “You got to come in and knock it down, one drill after another.

“He’s going to walk out of there four days later and everyone’s going to go: ‘Wow, he’s just as good or better than we thought he was.’”

Then, there would be no doubt that a running back will go in the top five picks of the draft for the third consecutive year, joining Ezekiel Elliott in 2016 and Leonard Fournette in 2017.

The Penn State star might even be the first running back selected in the top two picks since Reggie Bush in 2006 or even the first to go No. 1 overall since another Nittany Lion, Ki-Jana Carter, in 1995.

“I’m just focused on coming out here and trying to dominate this combine,” Barkley said.

Everyone expects him to do just that.

General managers and coaches know all about the 5-foot-11, 233-pound back with a magnificent medley of jaw-dropping quickness and excellent acceleration, speed, balance, vision and power to go with an off-the-charts work ethic who helped Penn State dismantle Washington’s vaunted defense in the Fiesta Bowl .

Mayock said Barkley will dazzle teams even when he’s not on his feet.

“When he goes into meetings at night,” Mayock said, “he’s going to blow people away.”

Barkley, who grew up boxing like his father and great uncle but was always drawn more to the gridiron than the ring, quickly rose to national prominence as one of the country’s most dynamic players as a true freshman at Penn State in 2015.

He flashed a frenetic running style to compile a lengthy highlight reel full of hurdles, spin moves and jukes on his way to a program-best 43 rushing touchdowns in three years.

Mayock said Barkley is at least equal to the last four top-10 running backs — Fournette, Elliott, Todd Gurley and Christian McCaffrey — all of whom made their teams significantly better as rookies.

“I could make the case that this kid Barkley is the best of those guys, best of all five of them,” Mayock said. “He’s clean off the field. And he’ll be great in your locker room. I would be absolutely stunned if this kid doesn’t go in the Top 5.”

The Browns, Giants and Colts own the top three picks in next month’s draft. Cleveland also owns No. 4 and Denver has the fifth selection.

Barkley said he embraces the chance to transform a downtrodden team like the Browns, who have one win in two years, or the Giants, coming off a down year: “You want to be part of something like that, something that’s bigger than yourself.”

Whoever ends up choosing Barkley can expect to be picking a lot later in next year’s draft. (Fournette’s Jaguars are picking 29th this year, five picks after McCaffrey’s Panthers).

Barkley averaged nearly 6 yards a carry as a junior in State College, rushing for 1,271 yards and 18 touchdowns and catching 54 passes for 632 yards and three TDs. He also completed two passes — one for a score — and returned two kickoffs for touchdowns.

He won the Paul Hornung Award as college football’s most versatile player and left Penn State after his junior year just 89 yards shy of the program rushing record with 3,843 yards.

That may come off as boastful, but not when Barkley says it.

He said he watches all of today’s great NFL running backs but models his game after none of them.

“I’ve never wanted to be like anybody,” Barkley said. “That’s something that my dad taught me growing up: ‘Never want to be like someone, be the next you.’ But I am a fan of the game, I’m a fan of the position and I watch everyone.”

If he had to pick anyone he’d like to be like, it’d be the Lions’ Hall of Famer.

“That was a great guy that I looked up to growing up not only on the field — off the field. The way he carried himself, he was humble,” Barkley said. “When he scored a touchdown, he’d give the ball to the ref. If you look at his football life, he’s carrying cups to his offensive linemen, and I think that’s what a running back should be about. That’s what our position should be about and I try to model myself after that.”