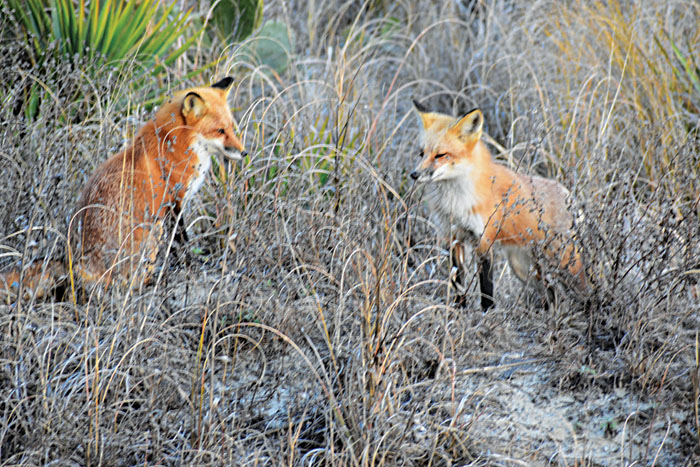 From somewhere within the dunes a beautiful red fox emerged. The title of the class was intriguing. The Unseen World would be offered the following semester and I couldn’t wait to hear more. The professor would help students explore Scripture for glimpses into spiritual warfare. Apparently there is a battle that continues around us between good and evil that we cannot see. A few examples include Daniel 10, Job 1 and 2, and 2 Kings 6:8-17. The passage in 2 Kings is one of my favorite. When a man of God and his helper are surrounded by the enemy, the young man panics and asks, “What should we do?” Elisha prays that the Lord will open his servant’s eyes so that he can see the spiritual army too. That’s when Elisha makes the classic statement, “Don’t be afraid! There are more on our side than on theirs!”

Not only is there an unseen spiritual battle continually raging, but there are many things in the physical realm that we fail to notice. Last week we were privileged to get away to the beach for a few days. The condo where we stayed had a balcony with a beautiful ocean view. One evening we had an unexpected visitor. From somewhere within the dunes a beautiful red fox emerged. Carefully he sniffed the air and prowled the area before settling in comfortably amongst the tall beach grasses. He seemed to be waiting for something. As we watched he was joined by a smaller, grayer fox that was much more shy and stealthy. Eventually they stood together atop a dune and David was able to snap a few great pictures without disturbing them. Even though we consider ourselves country folk, we’ve never actually witnessed a scene like that.

During the same trip we also got to see a school of about a dozen dolphins just beyond the breakers. Thankfully we had binoculars so their frolicking was not wasted. We’ve seen these majestic creatures before, but never this close and never this fun. They jumped from the water, some frontwards, some backwards, some even clearing the waves with a giant splash. It seemed to be a performance just for us.

In the three and a half days we were there, the Lord revealed to us things we had never seen before. And we’re old! The college class I spoke of earlier was over forty years ago. Though we know a few things because we’ve seen a few things, we sure don’t know it all. In fact, considering the grand scope of creation, both seen and unseen, I feel awfully small.

Paul in the letter to the Colossians says it this way:

“Christ is the visible image of the invisible God. He existed before anything was created and is supreme over all creation; for through Him God created everything in the heavenly realms and on earth. He made the things we can see and the things we can’t see- such as thrones, kingdoms, rulers, and authorities in the unseen world. Everything was created through Him and for Him. He existed before anything else, and He holds all creation together.” -Col. 1:15-17

Do you think mankind will ever learn that we don’t know everything? In the meantime the God Who made it all beckons: “Come and listen to My counsel. I’ll share My heart with you and make you wise.” –Proverbs 1:23

What a picture of His grace!

Can you see it?