Hosmer faces Royals for first time as member of Padres 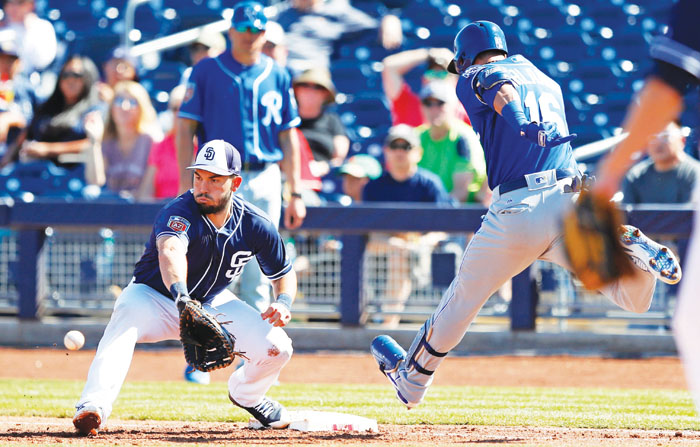 PEORIA, Ariz. (AP) — It was more than a spring training game for Eric Hosmer.

The four-time Gold Glove Award winner faced the Kansas City Royals for the first time since signing with the San Diego Padres last month, getting a double and an RBI against the team that drafted him in 2008.

Hosmer was 1 for 4 in San Diego’s 13-5 victory Friday. Hosmer signed a $144 million, eight-year contract with the Padres on Feb. 19 and is in camp with a new team following seven major league seasons with the Royals.

The 28-year-old first baseman had time to catch up with some old teammates, as well as Royals executive and Hall of Famer George Brett. He also stopped to take a selfie with Royals fans.

“It was weird,” Hosmer said.  “I’m not used to seeing that Royal blue on the other side. It’s spring training, but it is a different feeling. It really is. If I were to tell you there were no weird feelings in me before the game, I’d be lying.”

Hosmer faced off against close friend Danny Duffy, who started for Kansas City. Hosmer popped up in his only at-bat against Duffy.

“We were laughing and joking before and the whole at-bat and after,” Hosmer said. “It went well. It’s crazy. The last time I faced Duffy was in rookie ball or maybe instructional league. It’s been about 10 years since I’ve got to get in the box off him.”

Duffy remembered Hosmer homered off him in that intrasquad game when they were teenagers.

“I never wanted to face him,” Duffy said. “I never thought I’d ever have to. That’s a perfect world. He’s on a route that’s best for him. It was just a weird experience. I love the dude.”

Alex Gordon walked to lead off the game, then chatted with Hosmer at first base. Gordon, Duffy, Perez, Escobar and Hosmer were core members of the Royals’ teams that advanced to the World Series in back-to-back years and won it all in 2015.

Hosmer said changing teams “doesn’t change what we’ve all been through.”

“I’ve got nothing but love for these guys,” Hosmer said. “I’ll continue to root for these guys. A lot of us were 18-year-olds when we first got to the organization. We went from 18-year-old kids to grown men and we all kind of went through the maturation. We’re family.”

Royals manager Ned Yost was anything but sentimental about seeing Hosmer, who hit .318 with 25 home runs last season, in a different uniform.