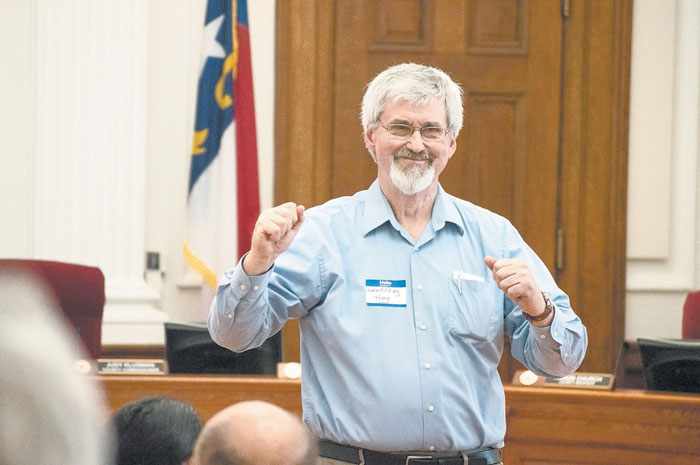 SALISBURY — Nancy Evans, elections director for Rowan County, said this election cycle has been one for “many firsts.”

The trend began when County Commissioner Craig Pierce filed to run for another commission seat, despite the fact that his own term will not end for another two years.

Now, the Rowan County Democratic Party is supplying its own first as Chairman Geoffrey Hoy filed to run in the state Senate race for the newly drawn District 33. Hoy said he has no intention to serve.

Hoy entered the race as a place holder for an unnamed Democratic candidate who suffered serious neck and back injuries before he could file candidacy.

Hoy said he will stay on the ballot through the primary, then withdraw from the race. With that, Evans said, the Democratic district executive committee would be allowed to appoint someone to take Hoy’s spot on the ballot.

“This was a sudden decision,” said Hoy, a retired pastor. “We sought numerous options, considered numerous possibilities. Our overarching concern was that we have someone on the ballot so that people would have a choice between the likely Republican Carl Ford and a Democrat. That would give people a clear choice for making their decisions.”

Hoy said he made the decision to enter the race reluctantly, and that some people — including his wife — disagreed with his decision.

But he said there are two more important issues at hand: one, to ensure there was a Democratic challenger for each Senate seat in the state, and, two, to defend basic democracy.

Diversity in the area is significant, he said, and voters need an opposing voice to truly dissect and comprehend key issues.

People have a lot to benefit from dialogue and not being in consensus, he said.

“I find that when people disagree with me, I learn more about myself and issues than when it’s just me and everybody with me,” he said.

With experience leading congregations in southwest Chicago, other parts of Illinois and Wisconsin, Hoy has been a community leader outside his tenure with the Rowan County Democratic Party. He calls it knowing the “basics of politics and responding to grassroots needs.”

Still, he holds that he has no desire to serve as a state senator. If the original candidate is unable to return to the campaign, he said, he will stick around just long enough for the party to find someone else.

“This man fills the bill. He’s younger, energetic, qualified and competent. Those are the kinds of things that he clearly exhibited to me and to others,” Hoy said. “If he can’t recover in time, we will look for those abilities and characteristics somewhere else. We want to make certain that people have a choice.”