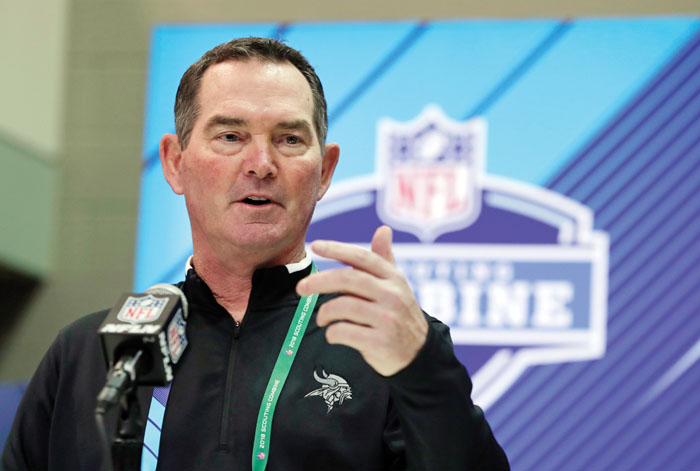 The Minnesota Vikings are working through a quarterback quandary this offseason, with three pending free agents.

They have ample space under the salary cap, around $50 million, and an unfulfilled desire to produce a long-term answer at the position after years of questions.

Coach Mike Zimmer expressed caution about the strategy of spending their way out of the uncertainty.

“I think it’s really, really important that we understand that we’ve won 40 games in the last four years and we’ve done this by being pretty good on defense for the most part,” Zimmer said Thursday at the NFL scouting combine in Indianapolis. “This year the offense was much better. Part of the reason we’ve been winning games is because we’ve been staying in games on defense, we’ve been a smart team, all those things.”

About half of the quarterbacks in the league are making an annual average of $20 million, and the standard prices will only increase this month with Kirk Cousins leading the list of soon-to-be free agents. Zimmer, for his part, pumped the brakes on the notion of trying to win such a bidding contest.

“I want to be really careful about taking away from our strength … because of financial reasons,” Zimmer said.

Staying in step with what general manager Rick Spielman said Wednesday, Zimmer told reporters the Vikings are still assessing the pros and cons of Case Keenum, Sam Bradford and Teddy Bridgewater with the market set to open on March 14. Zimmer said all three quarterbacks are “definitely” under consideration.

Breaking with the guarded style of his boss, Zimmer pushed the candor button at the podium. He acknowledged the realities and reservations of each of the three players he’s had as the primary starter over the past three years.

“It’s important for myself and Rick and the organization to pick the right guy that is going to help us continue to move forward,” Zimmer said. “If we don’t do that, then I’ll probably be fired.”

Keenum took over after Bradford hurt his knee following the season opener and enjoyed a career-best performance, helping the Vikings reach the NFC championship game. Before 2017, he’d just been a backup. Several times during the year, Zimmer hinted at mild skepticism about Keenum’s ability to keep up such success.

“Is he the guy when he was at Houston or the Rams, or is he the guy who played for us?” Zimmer said, repeating a similar line of questioning for Bradford, who didn’t experience much success early in his career with St. Louis.

Bradford’s biggest issue is the knee, which Zimmer described as a “degenerative” problem. There’s clearly no perfect answer for the Vikings in this complicated situation.

Bridgewater presents the least-expensive option but also the least-known, considering he last started a meaningful game more than two years ago. The amount of time he missed while rehabilitating his knee injury has made it difficult to evaluate his ability to lead the team for the next decade, as the Vikings originally intended when they drafted him in the first round in 2014.

“It’s really hard to evaluate just in practice. We have to go back a lot with Teddy on what he’s done in the past, him as a person, his work ethic, all those things. Him not playing for two years and not being able to see him play in live situations, that’s concerning a little bit,” Zimmer said. “But I love the guy. He’s a great kid, great competitor, a winner.”