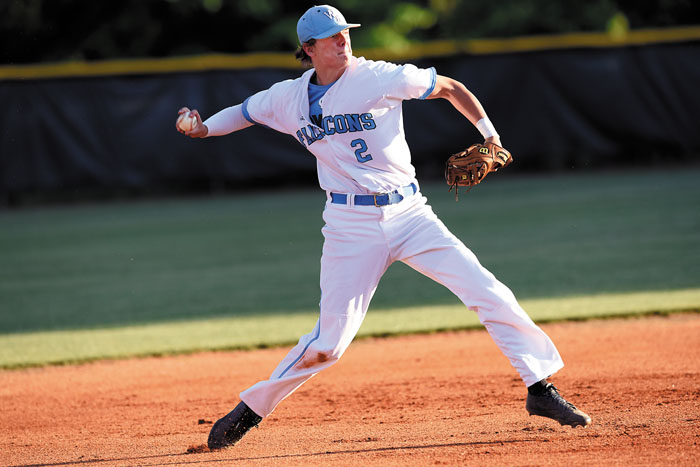 Wayne Hinshaw file photo/for the Salisbury Post ... West Rowan third baseman Olen Stamper (2), shown during a game last season against Reynolds in the 3A playoffs. Stamper, a senior, will also be a key pitcher for the Falcons this season.

The past three seasons have included three conference championship banners and three Rowan County Coach of the Year awards for Seth Graham.

West Rowan outlasted Carson in a 13-inning struggle last season that ultimately determined the regular season  conference championship. That game summed up what the Falcons have become under Graham. They’re gritty. They find a way.

Half of the 20-win seasons in West’s proud history have come in a flurry during Graham’s three years at the helm. West has advanced to the fourth round of the playoffs twice during Graham’s brief tenure.

“Our guys understand that winning is never a given,” Graham said. “They’ve put in the off-season work that gives us a chance to have another good season. Sure, we lost really good players, some guys who had been in the same position for three years, but we still have very good talent. We still have high expectations.”

That means only 10 conference games this spring, so the two against East Rowan and the two against Carson are going to be magnified even more than usual. The earliest of those four encounters for the Falcons will come against East on March 20 at Staton Field, so West’s new starters, including three up-the-middle starters, will have some time to settle in.

West’s  games against Carson are far part (March 29 and April 24), so Graham expects to see Carson ace Owen White in both of them. East lefty Hayden Setzer also could make things uncomfortable for the Falcons.

“In our new league, we finally got rid of Cabarrus County,” Graham said with a laugh. “But we brought Rowan County with us.”

West has three hurlers who have been on the mound in big games. Senior right-hander Olen Stamper (4-0, 1.72 ERA) will be the No. 1.  Junior left-hander Daniel Durham (3-3, 2.31 ERA) and junior right-hander Payne Stolsworth (4-0, 1.33 ERA) will be other two frontline guys.  Stolsworth has been playing basketball (he’s also the football quarterback), so he hasn’t thrown as much in the preseason as the other two.

“Those three guys pitched a lot last year, they’ve all seen their velocity jump up, and they’ve added to their secondary pitches,” Graham said. “Durham and Stolsworth are football guys and they’ve gotten a lot stronger. Durham does a great job of holding runners and controlling the running game. He takes a lot of pressure off our defense.”

Behind those three, West boasts a host of arms, really exceptional depth. Graham will have no shortage of options. He’s looking forward to seeing who emerges once the games start counting. Keep an eye on sophomore Cullen Davis.

“We’ll need to develop the same kind of pitching depth we had last year,” Graham said. “That was a big reason why we were good.”

The departure of Atwood and Wilhelm — both are at Catawba now — wiped out West’s catching, but Graham doesn’t see that position as an issue. Freshman John Thomas “JT”  Fecteau will be the starting catcher.

Fecteau played for the Greater Cabarrus Stallions as an eighth-grader and competed against high school players. He also played for West Rowan Junior Legion last summer.

“He plays far beyond his years,” Graham said. “You’d think he was a junior.”

The other catcher for West is Mauricio “Mo” Salazar, who also could be a key guy in the bullpen.

West has plenty of experience in the outfield, not big names or guys with impressive batting averages, but players who can run and are strong defensively. Senior center fielder Mykal Berger, senior left fielder Dillon Simpson and senior right fielder Logan Sproul  are returning starters, but Graham will also use junior pitcher/outfielder Jake Perez and sophomore pitcher/outfielder Daniel Sell.

“We’ll mix and match in the outfield, depending on the opposing pitcher that day,” Graham said. “We’ve got some speed out there, and overall, we’ve got a lot more speed than we had last season. We’ll steal more. We can be more aggressive on the bases.”

The West infield might appear unsettled, but Graham believe he’s in good shape. Stolsworth, Durham and Stamper (14 RBIs last year) all swing the bat well, so all three will be in the lineup no matter who starts on the mound. Stolsworth and Stamper and Stolsworth can play third base. Durham is a sound first baseman,

“Stolsworth, Durham and Stamper are our power,” Graham said. “They’ll probably hit 3-4-5 in the lineup.”

The new shortstop will be Zeb Burns, while Cameron Graham, a football receiver, is expected to take over at second base. Both are athletic kids.

West will tackle a challenging schedule, including a trip to Charlotte to play Providence in late April, as preparation for the state playoffs.

West will again make a guest appearance in East Rowan’s Easter tourney at Staton Field. West also has scheduled a number of former Cabarrus rivals for non-conference games. The Falcons are scheduled to open tonight at home against Mooresville.

“Tough schedule and quite a few new faces,” Graham said. “But we’re excited about seeing how well we can compete.”

West will compete — and probably a lot more. The Falcons’ recent track record is hard to argue with.